It’s official… they shook on it! Scorpio Sky and Chris Jericho will square off next week for the AEW World Title after SCU tricks Jericho! Plus, Darby Allin vs. Jon Moxley in a body bag?!

It’s Official… They Shook On It! | AEW Aftershock 07

Chris Jericho had a major announcement this week on AEW Dynamite. As he stood in the center of the ring pulling a move from the Fonz on Happy Days, he was unable to say S-S-S… Sorry, so Jake Hager did it for him. But his big announcement was a Thank You party on Thanksgiving… for himself! That is until SCU, led by Scorpio Sky, the man who pinned Jericho last week and gave him his first AEW loss, showed up to rain on the parade. This led to Sky getting a title shot next week much to Jericho’s delight, thinking it’s exactly what Sky did NOT want. After all, they shook on it!

To cap it all off, Darby Allin comes to the ring draped in a body bag and takes the fight right to Jon Moxley before the match can even start in the main event. The two tear the house down to close out the show.

We discuss all this and more!

On this episode of AEW Aftershock, we talk about: 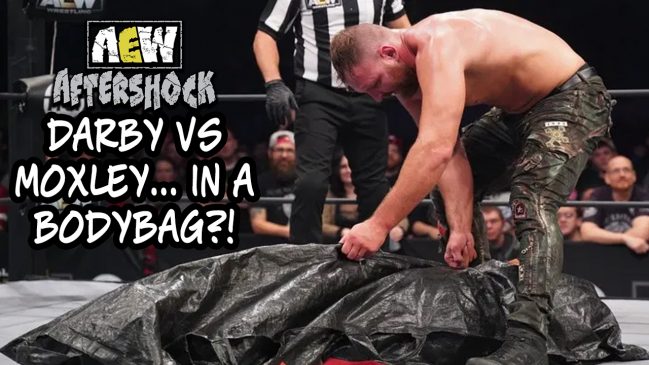 Who stood out? What is different about AEW? What did we like and what did we think could be improved? We talk about it all!

If you have never watched All Elite Wrestling (AEW), let us help you get off the fence and see why you should give it a shot!

AEW Aftershock is the show after the show. It’s a talk show about AEW programs AEW Dark and AEW Dynamite, as well as Pay-Per-Views, Being the Elite and more! We share our thoughts on the programming every Friday right here on Comic Frontline. Join us and be part of the conversation in the comments below.

We’re All In. Are you? Are you with AEW?

Try StreamYard using this link and help out the show and Comic Frontline: https://streamyard.com?ref=5206286236…

Find the AEW Aftershock Playlist here for more episodes of the show.