Comic Frontline: David, what can you tell us about Bettie Page Unbound #10?

David Avallone: Bettie Page Unbound wraps up the five issue “Invasion of the Bettie Snatchers” arc… but also the 25 previous chapters of Bettie I’ve written so far. It’s not an “ending…” I still have plenty of Bettie stories to tell… but I hope it’s a satisfying conclusion to what’s happened so far. I once said I would be happy to write 100 issues of Bettie Page, and honestly I had no idea I’d be a quarter of the way there in less than three years.

Frontline: Do you have a favorite moment from the issue you can tease?

Avallone: There are a lot: it’s hard to narrow it down to one. I’m particularly fond of the last page. It’s a Christmas scene, and I wrote it around Thanksgiving, and it was just an echo of some great times in my life. Aside from that… I think readers will enjoy Bettie’s final words to her enemy in this issue.

Frontline: When transitioning from Bettie Page to Unbound why did you think it was important to create a new volume?

We had done two volumes of Bettie Page very close on top of each other, when Dynamite head honcho Nick Barrucci approached me about a third series, with a novel cover idea.

Nick wanted to see Bettie as Red Sonja, Bettie as Vampirella, Bettie as Dejah Thoris. The fourth cover-hero was up to me. The reason for the costumes was also up to me. Instead of taking the easy route – Bettie is an actress, and she could wear any costume – I decided to tell a Multiverse story instead. I had previously established Yog-Sothoth – one of Lovecraft’s Great Old Ones – as a Bettie antagonist: she defeated him in the 2018 Halloween issue. Well… Yog-Sothoth is a dimensional gateway. What if he opened a gate to destroy the world, and Bettie jumped through and ended up in another dimension? A dimension where she’s Red Sonja? And each issue is a new gate, and a new Bettie, with new powers and a new perspective. I decided on Tinkerbell for the last archetype, because it was the fourth issue grand finale… and Tinkerbell, tiny little Tinkerbell, taking on Cthulhu was an irresistible thing to write.

My joke title for the first four issues was CRISIS ON INFINITE BETTIES, but I knew we really didn’t want to call the series that. I came up with Bettie Page Unbound to prevent confusion with the previous volumes.

It was only supposed to be a four issue mini… but readers really seemed to dig it, so Dynamite asked me to extend it… first one more issue, then six more, taking it to ten. I did a one issue “epilogue” to the Crisis, where Bettie goes to see Albert Einstein for a little help understanding what happened to her. And then the five issue BETTIE SNATCHERS arc.

Frontline: Why did you feel this was a good ending point for Unbound?

Avallone: As above, it was only ever supposed to be four issues, and we charged into the following six pretty fast. I’m perfectly happy with what I came up with, and I think they’re fantastic comics, but I wanted to take a (hopefully short) break and come back with something new and exciting. Right now I’m coming up with ideas for the next series, and maybe a special or two… possibly a crazy team-up… we’ll see. It’s all top secret right now…

Frontline: What are you most proud of with this volume in particular?

Avallone: Bettie Page began as a – relatively – earthbound comic. Sort of The Marvelous Mrs. Maisel meets The X-Files (though TMMM didn’t exist when we started out.) I did my best to present a very human and very real woman, as I understand her from listening to her interviews, and throw that character into increasingly crazy stories. Unbound took that to a whole new level, but I think the way we built to this series made that seem logical and inevitable, rather than completely out of left field.

The epic nature of this part of Bettie’s saga has tested her, has taught her things about herself… and has even given me an opportunity to tell the reader some of the true stories of Bettie’s life, the real trauma she overcame, and showcase — in a fictional world — the authentic bravery and good humor with which she survived her challenging roller-coaster of a life.

I think I’ve taken Bettie to some very unexpected places, while still being absolutely true to her character. That’s what I’m most proud of.

Finally, it would be malpractice not to mention the amazing work of my collaborators on this volume. It has to start with editor Kevin Ketner, who brought on so many of these talented people. I’m proud that I’ve been able to work with artists Julius Ohta, Pasquale Qualino, Matt Gaudio, Kewber Baal, Moy R, Roy Allan Martinez… colorists Ellie Wright and Sal Aiala… letterer Taylor Esposito (assisted by Rieanna Bates)… flatter Sheelagh D… and cover artists John Royle, Scott Chantler, David Williams, Vincenzo Federici, Anthony Marques, J. Bone, Kelsey Shannon. As someone with no perceptible artistic talent, it feels like magic that I type these words and all this amazing work is created… something so far beyond what I’ve put on the page could ever convey. I’m very lucky, and I never forget that.

Be sure to watch Comic Uno this Wednesday at 2 PM EST for a LIVE no holds barred spoiler filled interview with writer, David Avallone, about Bettie Page Unbound #10 and Avallone’s 25 issue epic. 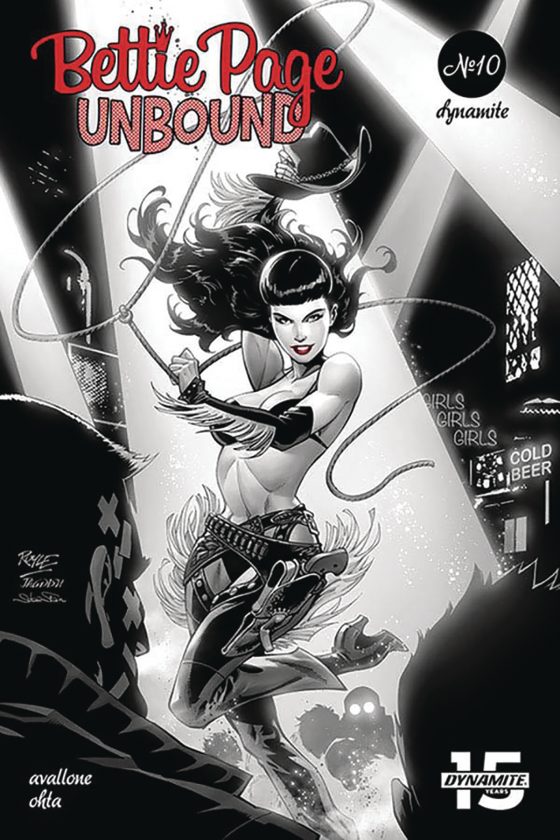 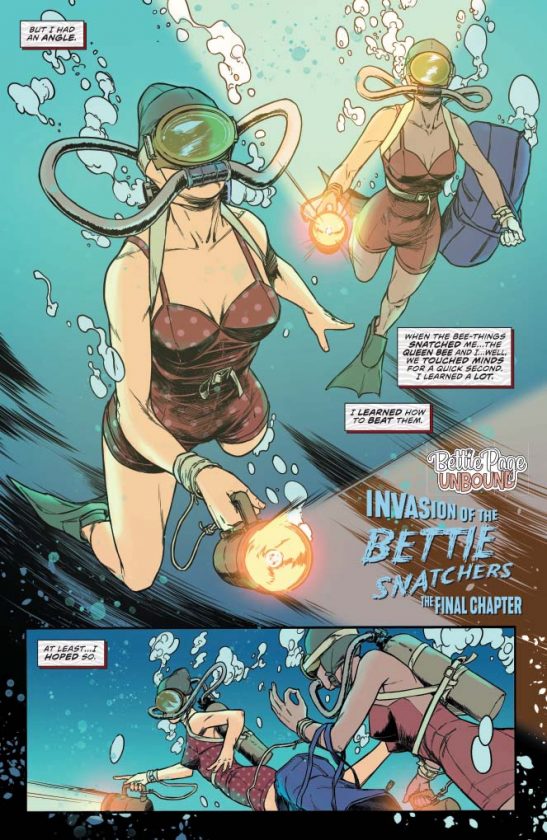 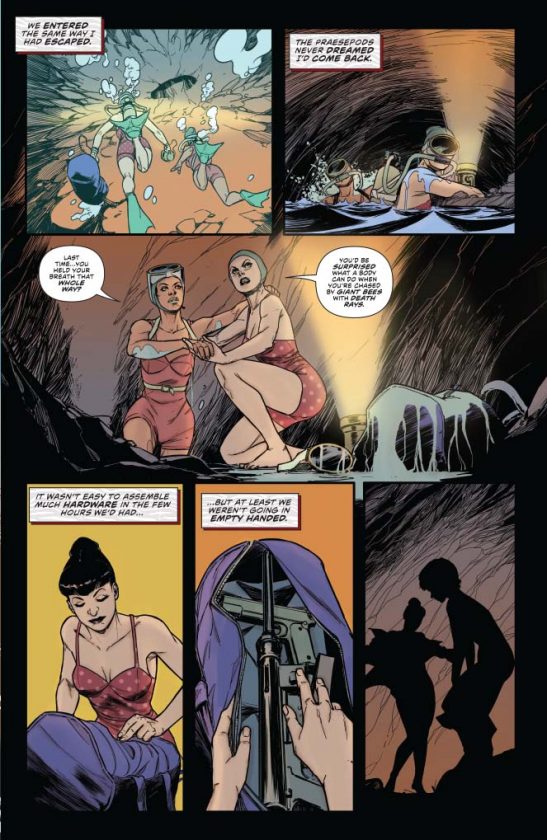 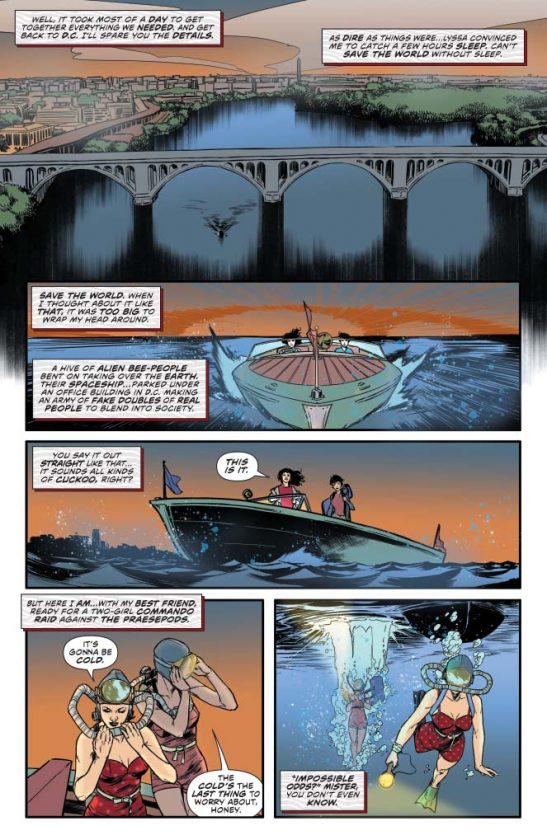 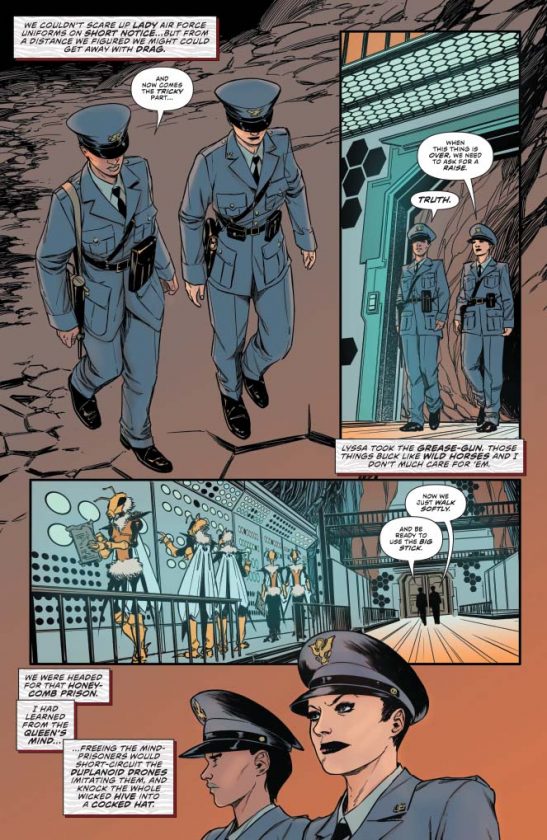 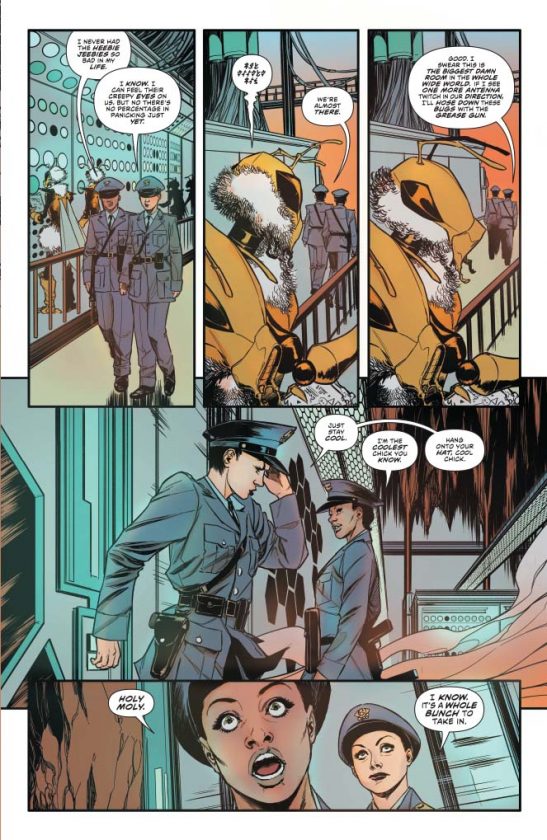