This issue of Pulp Girls is part of a universe filled with stories starring female leads and featuring different artists. This issue is an explosive action story about the Swiss Army Woman, an Olympic skier who becomes a living weapon after losing her leg and replacing it with secret tech that turns her right thigh into every weapon, tool, and gadget imaginable!

The Kickstarter has already reached its $5,000 goal but will continue to take pledges until February 12, 2020, at 8:59 PM EST. Rewards include various covers for Pulp Girls: Swiss Army Woman #1 by cover artists like Marco Maccagni ($15), Catman ($20) and Bill McKay ($25). Or get a digital copy for $5. Help this crowdfunding campaign reach its first $7,500 stretch goal here.

Me: For fans of your other work, including Vampblade and Amalgama: Space Zombie, what about those series that people enjoy will they be able to enjoy in Pulp Girls: Swiss Army Woman?

Jason Martin: All my comics are genre-bending and fun first and foremost, and Swiss Army Woman is no exception. Vampblade was at one point going to be part of my Pulp Girls collection of concepts, so its in the DNA of both. Basically, if you like your comics to be a good time where you check your day-to-day worries at the door and just escape to twisted realities where anything goes… and you never know where that may be, then you’ll be a fan of all of them for sure!

Me: You mention that “Swiss Army Woman is a blend of some familiar inspirations”. Can you go into more detail about your specific inspirations for this title?

Jason: Sure. Basically I created Swiss Army Woman a while ago when I dreamt of doing a Cherry Darling comic – you know the girl with a machine gun leg from Robert Rodriguez’s Planet Terror portion of Grindhouse? – and I thought, I can come up with my own take on that! So when I came up with the idea to go one better and have a character with a Swiss Army Knife like weaponized leg, I knew that was too good to be true. Then it was just imagining what kind of world this could happen in, and it seemed natural to marry that to an animated/cartoon series sensibility.

Which brings us to your next question…

Martin: First, it’s part of my Pulp Girls collection of concepts, which is rooted in grindhouse/schlock/b-movie cinema, crazy offbeat comic books, and serial adventures, all with female leads. Then this concept, like I mentioned, is also similar to cartoons, in that it’s a heightened world where we take Switzerland and its myriad of iconography and mine that for our setting and characters. With a colorful rogue’s gallery similar to what you’d find in Batman the animated series or 80’s action cartoons.

It’s all very rich to play with thematically, and really lets the character and concept shine. Just all-out fun with a “soldier” from a secret technologically advanced military from a supposedly neutral country, toggling through whatever weapon she needs, below her thigh, to fight bad guys who threaten her dear Switzerland! 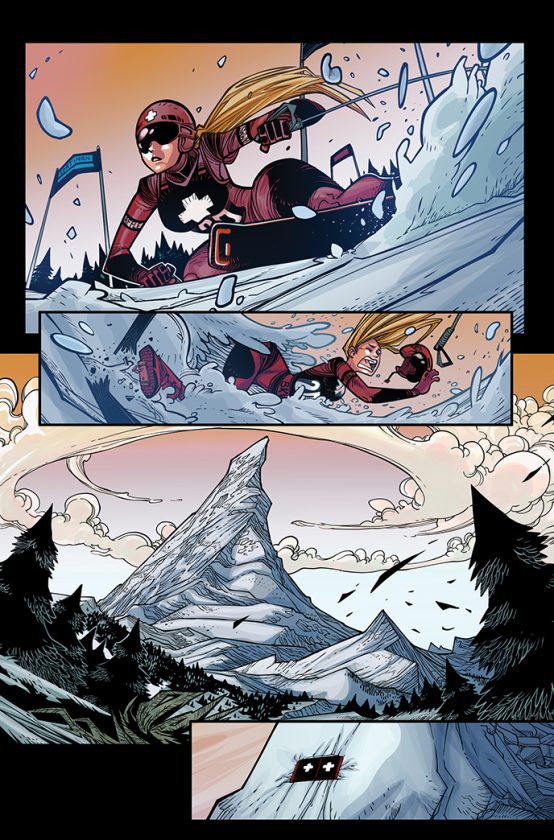 Me: Say you could choose any one of the Swiss Army Woman’s weapons to have access to at all times. Which weapon would you choose and why?

Martin: That’s a tough question because there are so many. I think it would be fun to just cycle through as many as possible, maybe. I mean, that’s the fun of a Swiss Army Knife, right? Seeing what all you can pop out of that thing! What all is in there?

We certainly aim to answer that here for our Swiss Miss and her book.

Me: You’ve worked with your artist, Marco Maccagni, on numerous projects, including this one. What makes him the perfect artist for this project?

Martin: Well first of all because he’s really very good. Just a great storyteller. Marco takes the scripts and breathes so much life into them and really illustrates whatever action and emotion is on the page. But also, because his style is just a perfect fit for the animated tone of this concept. Just perfect!

I couldn’t be happier than to work with Marco on this! 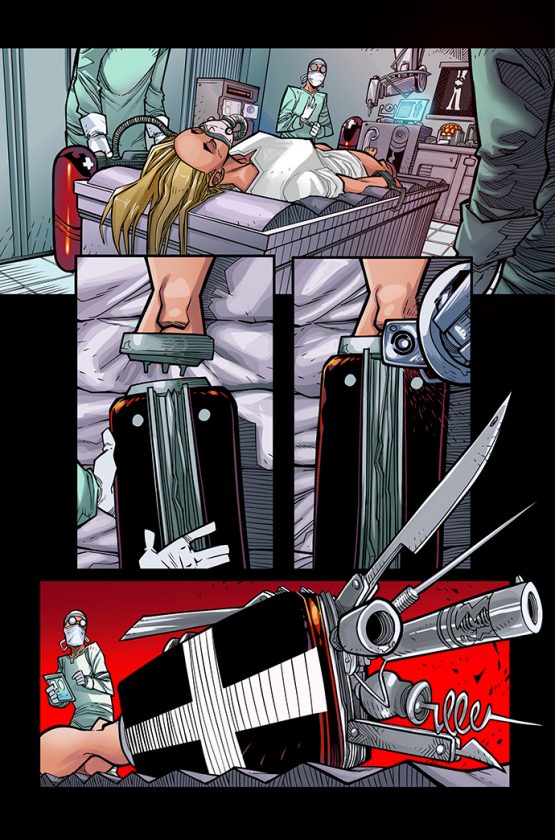 Me: What is the number one reason why someone should pledge money to your project?

Martin: To get an original and fun comic directly from the creators.

That’s the nice thing about Kickstarter and crowdfunding, it gives comic book creators access directly to the fans.

There are just so many comics, and very good ones at that, available in comic shops, so it’s great that there’s a way to get your work in front of your audience in a way that you really can’t today via stores. Don’t get me wrong, I love the direct market. But crowdfunding is a great alternate channel and a great platform for creators and fans.

Martin: Do your thing.

Get out there and write your comics. Draw them. Share them.

And make them about what you’re passionate about.

The world has never been better for aspiring creators to break in, and to share their ideas. 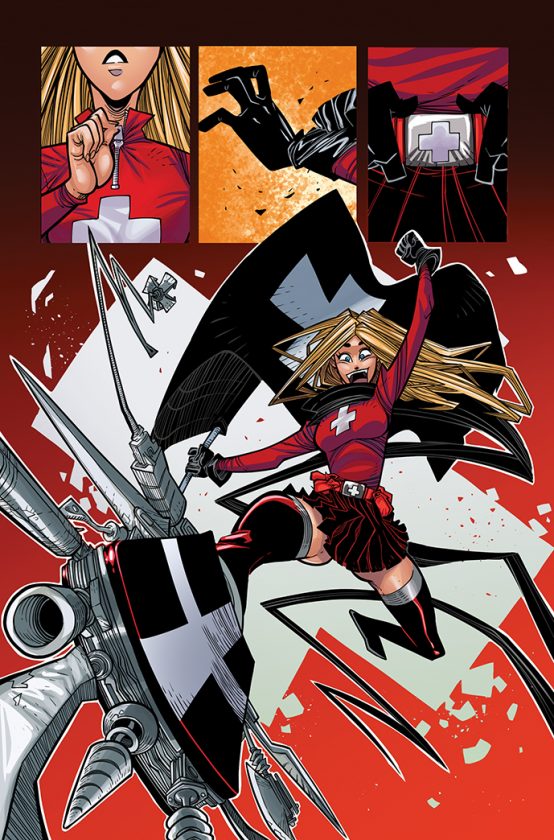 Me: Can you tease us with any information about the future issues of Pulp Girls?

I previously did a Pulp Girls book/Kickstarter for PRINCE-S STARthief, and there is more planned for that. And then while the bulk of my creative time has been spent working on the awesome monthly books I do with Action Lab: Danger Zone (the aforementioned Vampblade, Amalgama, and Danger Doll Squad, etc), I’ve been cooking up quite a few more amazing concepts for Pulp Girls that are ready to start rolling out, starting with this current Kickstarter, and I absolutely can’t wait to share them!

So look for more Pulp Girls from me in the very near future.

But right now please be sure and check out Swiss Army Woman, and thanks so much for letting me talk about it!

Me: Well, thank YOU for letting us take a peek into the world of Pulp Girls, Jason! Help support the Swiss Army Woman with his Kickstarter. 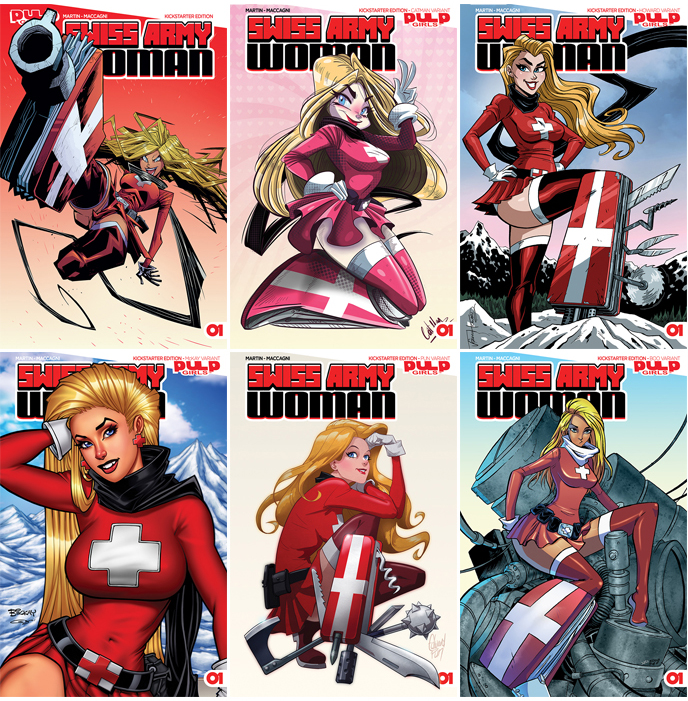 Salty Roos Are We There, Yeti?