Looking for an adult comic book that tackles mature themes ranging from sex, addiction, and suicide? Then check out Mara: Demon Killer, which focuses on a world full of evil.

In the first chapter, a young girl named Mara takes her life and faces Limbo. Forcing her to become a demon killer, Mara and her cat Raro must seize the very demons that cost Mara her life.

This is the first Kickstarter project created by Orlando Morales. A graphic designer and animator, Orlando is taking on the writing reigns of this project. The artwork is the first professional collaborative project by Kateryna Ilyina, who specializes in poster illustration, character design, and visual storytelling.

I spoke with writer Orlando Morales and artist Kateryna Ilyina below.

Me: What inspired the creation of Mara: Demon Killer?

Morales: I grew up watching movies like Ghostbusters, Beetlejuice, and Hellraiser where it shows a world after death. Later on, I started reading Neil Gaiman stories that also included this theme. So, I decided to create a story where it shows a victim of suicide, who has a second chance to redeem herself.

Me: How would you describe Raro and his relationship to Mara?

Morales: Raro is Mara’s guide and teacher. Although he appears to the world as a cat, he is more than that. Raro is not bad or good because he is part of purgatory. They have an interesting relationship, because Mara is still trying to figure what happened, and is more serious, while Raro is a smart ass; he is funny and a little crazy.

Me: Who are some other key characters in the series?

Morales: In the first book we introduce Aiza. She is an old lady that Mara meets after coming back from the dead. Aiza explains what’s going on. Also, in this first chapter, we introduce the angel Azazel who wants to help Mara. He appears for a brief moment but he will have more of an important part in chapter two. 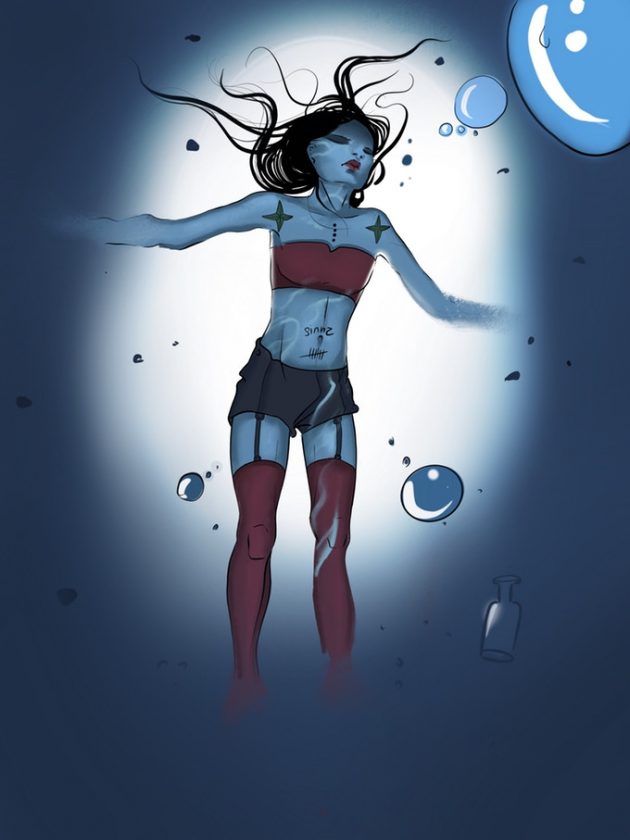 Me: What does the day-to-day life of a demon killer look like?

Morales: Mara is sent back to resume her life as normal, while she looks for the demons that made her take her life.

Me: You mention this book will have mature themes including suicide, drug addiction, sex, and exploitation. Can you talk a bit about why these themes are important in your work?

Morales: Yes, this character is created around tragedy, and for me to develop that, it needs to show those issues. In the first book, we learn about her life as a stripper. In the second chapter, we are going to give more information about her tragic life and how the demons around her influenced her decision.

Me: Why do you feel Kateryna is the perfect artist for Mara: Demon Killer?

Morales: Kateryna’s art style is really dark and I think it is complementary to my ideas. In making the story with her artwork, it is not traditional comic book art. I’ve always liked different styles, like Steve Niles’ books, which have their own signature art.

Morales: I think a good reason to pledge is because Katerina is a new rising artist. Pledgers will reap the benefits of gaining unique prints by her and an alternative cover that will only be printed for the Kickstarter.

Morales: To keep working in what inspires you, network at conventions and meet other artists. Find an artist that can match your story and style. Lastly, always support other artists.

Me: How did you become part of this project?

Ilyina: I have been an artist all my life, but I worked on my personal projects. I was never part of a collaboration of any sort, so working on a comic was defiantly something new for me. Art school was a good beginning for my future carrier as a professional artist. That’s where I met Orlando Morales, a comic lover and an artist himself. He made an amazing offer to me to draw for this project that he is planning to work on. He shot me an e-mail with a script, which I liked; that’s where it took off

Me: Which page was your favorite to create in Mara: Demon Killer and why?

Ilyina: I personally love vivid and dark colors, something neon, I love to draw dark allies, strange things, so that was the best part of working on Mara. I also like to learn new things every day, so capturing poses and anatomy was a major part for me. The facial expressions were hard, for I am not about the expression of the face that much, but I think it went well. My favorite page was where Mara got into her club; I do like to draw people nude. It was the time where I could really enjoy myself with bright colors and lack of outfits. 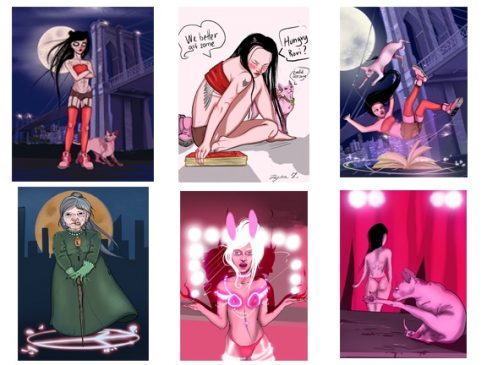 Me: The rewards for this Kickstarter include some of your posters and exclusive art. Why did you pick these art pieces in particular and which one is your personal favorite?

Ilyina: I like that in Mara’s posters I could draw something personally from me. It was part of “draw it in your own style.” My favorite poster is when she is tranquil with her cat, just chilling around, free from all the fighting. And the best part is that the poster is done just like the other posters I sell, so there can be a whole chain of posters in the same style, telling their own story.

Ilyina: We wanted the project to be about “the good among evil.” For me personally, as an artist that strictly likes symbolism, this story is something more. If you interpret it into our world, this could be about a regular girl’s struggle, and the monsters are the ordinary people that we fight every single day. It’s for and about someone going through a struggle, it’s for that lonely girl out there that is forced into things she can’t control.

I feel like we need to help others and be less judgmental these days. We don’t need to be mad at someone for doing us wrong, we have to take their hand and show them how things can be done differently, just like Raro and Mara. Isn’t that a good idea to pledge to? 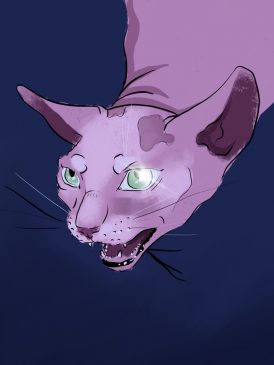 Ilyina: Be you, and perfect your art. Listen to advice, learn, but do it how you think should be done, with that device applied. Like Oscar Wilde said, “Be yourself, everyone else is already taken.” It’s the praise that I live by. I don’t know if it will get me somewhere, I don’t know what I will be doing in two to four years, but at least I will be myself and enjoy every second of my art; that’s what it’s all about.

Me: Thanks for your time, Orlando and Kateryna! I wish you the best on your first Kickstarter project, and congrats on already hitting your goal! Readers can check out Mara: Demon Killer on Kickstarter.

Salty Roos Are We There, Yeti?