Following the success of Christopher Priest’s Vampirella series, comes a spin-off titled sacredsix. The ongoing series is written by Christopher Priest and drawn by Jae Lee and will delve into the journey of four women lured to rural Georgia as part of a mysterious scheme to defend an impoverished farming town which finds itself under siege by zealots. Sacredsix will introduce old characters to a contemporary world; revamping them for a fresh, new era.

Luckily, Comic Frontline had the chance to talk to writer, Christopher Priest, about his upcoming title at Dynamite Comics. We discuss how the title will tie into his Vampirella run, an in-depth analysis of his main cast members, and what he’s most excited for fans to get out of his series. Sacredsix is set to hit comic book stores May 27th.

Comic Frontline: To jump straight into it, tell us a bit about this title. Why did you want to make a spin-off of Vampirella?

Christopher Priest: Let me start by emphasizing “sacred” is a PLACE, the City of Sacred, Georgia. The Six are the BAD GUYS– a fundamentalist militant wing of a shadowy organization called the Lumea Următoare, the “Next World”, bent on global domination. Obviously, Lilith intends to knock these folks off so our ladies can take their place.

The idea to expand Vampirella’s shared universe came from Dynamite. After the unprecedented reception we received with Vampi’s 50th Anniversary launch, my guess is the obvious next step would be to reintroduce other characters from her world to her current fans.

Frontline: How do the Sacred Six form?

Priest: Well, it’s not “The” Sacred Six. sacredsix (lower case, no space) is kind of a mantra, whispered or hissed repeatedly out of the darkness. The title lends the impression this is a super-team book, which I lobbied for because heroes are so popular these days, but this is far from being like any super-team you’ve seen before.

The ladies are drawn to a run-down town in rural Georgia out of varying circumstances. Some have never met and most of them actively hate one another. We quickly see the hand of Lilith of Drakulon, Vampirella’s manipulative sorceress mother, orchestrating many of these events, but the narrative follows the ladies as individuals drawn to a common cause largely out of serendipity. “Numerology,” the Year One arc, is the story of how and why these disparate individuals, all of them (literally) bloodthirsty killers, ultimately forge a team.

Frontline: What can you tease about their dynamic with each other?

Priest: Sure, there are dynamic connections between the characters. Lilith, the ersatz den mother/Professor X, is the master manipulator who has, via circumstances detailed in Vampirella, forced her daughter, Vampirella, to join her in Atlanta under the pretext of defending a town full of “peaceful” vampires.

Nyx (formerly “Mistress”) has tracked Lilith to Ashthorne in order to kill her. Vampirella and Nyx hate one another, and Vampirella has major PTSD where Nyx is concerned because Nyx once killed her.

Draculina is actually a woman named Victory and was briefly Vampirella’s love interest. Lilith has adopted Victory and renamed her, endowing Draculina with occult powers.

Throughout the Warren and Harris years, Pantha has been written as Vampirella’s friend. Here we have a unique take on the character, who does not remember Vampi at all.

Chastity loathes all vampires, despite being a half-vampire herself. She does not know any of these women, but is hired by Lilith to go after The Six– the leadership of a deadly vampire clan.

Frontline: What went into revamping old characters like Pantha and Draculina?

Priest: A lot (laughs). I gravitate toward realism, which can be a major challenge when approaching comic book characters. The way I approached Deathstroke was to ask myself, “What would a Netflix Deathstroke show look like?” Drew Goddard, Jeph Loeb, Joe Quesada et. al. set the standard with Daredevil Season One, a revolution in terms of bringing comic book characters to life and taking the material (and the fans) seriously. I strive to do that– take you seriously.

Now, a lot of the Vampirella creative material was intended to be satirical. Draculina, for example, was the usual trope of Jeannie’s twin sister or Samantha’s cousin Serena. I think the comics audience has matured beyond that and, while that might be fun for a bit, I was concerned about the longevity of that approach.

What I am trying to do is be as truthful to the original intent and history of the character as I am able while grounding the character in as much realism as circumstances will permit. We are striving for freshness and newness. Sometimes it works, sometimes it doesn’t and we adjust.

Frontline: Will sacredsix tie into your regular Vampirella run?

Priest: We’ve been planning for sacredsix since Vampirella issue #4, where Drago, the vampire mayor of Ashthorne, appeals to Vampirella for help. Victory, Vampirella’s self-absorbed and needy love interest was, from day one, planned to become the new Draculina (which I thought obvious from the moment she started putting n one of Vampi’s old costumes).

But, no, this won’t be Vampirella Biweekly, by which I mean we won’t force people to buy both books in order to know what’s going on. In fact, the Vampirella monthly will be moving in a very different lane from sacredsix as it launches into Year Two.

Frontline: Are there any other Dynamite characters you want to write?

Priest: Well, I had this idea for a black James Bond story but the licensor rejected it. I want Dynamite to get their hands on Gigantor. I love Gigantor. But they just hang up on me.

Frontline: What are you most excited for fans to see with your story?

Priest: sacredsix is a morality play about two cities (actually one city and one town). About alleged Good Guys and alleged Bad Guys. About them and us, and how different they are from us and yet how similar. About how evil can exist in light places and good can exist in dark places.

The country if not the world is now deeply divided by Stupid Tribalism. Stupid Tribalism is fueled mostly by the echo chambers we all retreat to. The book is about how division fuels hatred and fear and how hatred and fear profits industry and politics. It’s as if we’ve lost the capacity to simply be human beings, to recognize the humanity in one another.

There was an article in the Colorado Springs Gazette recently about how the time limit on downtown parking meters has been extended to 10 PM. You used to be able to park for free after 6, but now you have to feed the meter up until 10 PM. The very first comment, the very first one, was some nitwit blaming the Democrats. And the flame war began.

sacredsix explores the roots of tribal fanaticism, which are dug deeply into ignorance and superstition and fueled by ridiculous false assumptions and by the quality of information being broadcast into which echo chamber.

Drenched in blood and faith, sacredsix is an exploration of the foolishness I pray we soon outgrow and remember we are all mortal. Well, other than the vampires, of course.

Oh, and by the way, those parking meters the flamers were blaming Democrats for? The mayor of Colorado Springs is a Republican.

Covers and Art from Sacred Six 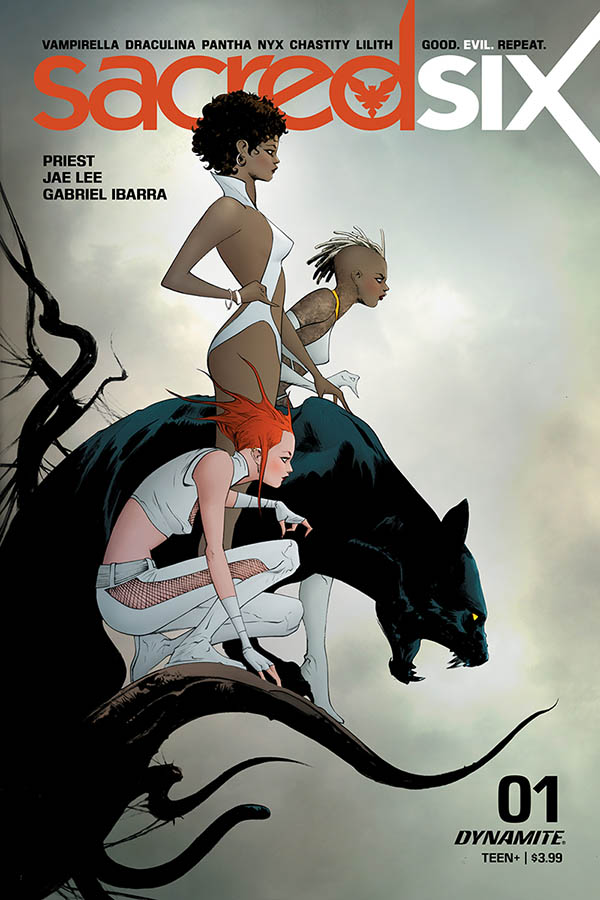 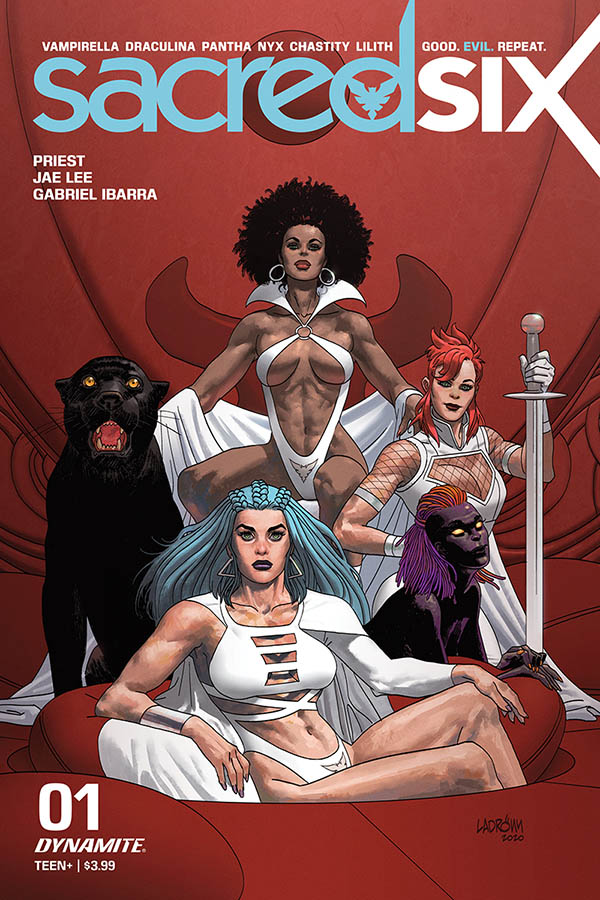 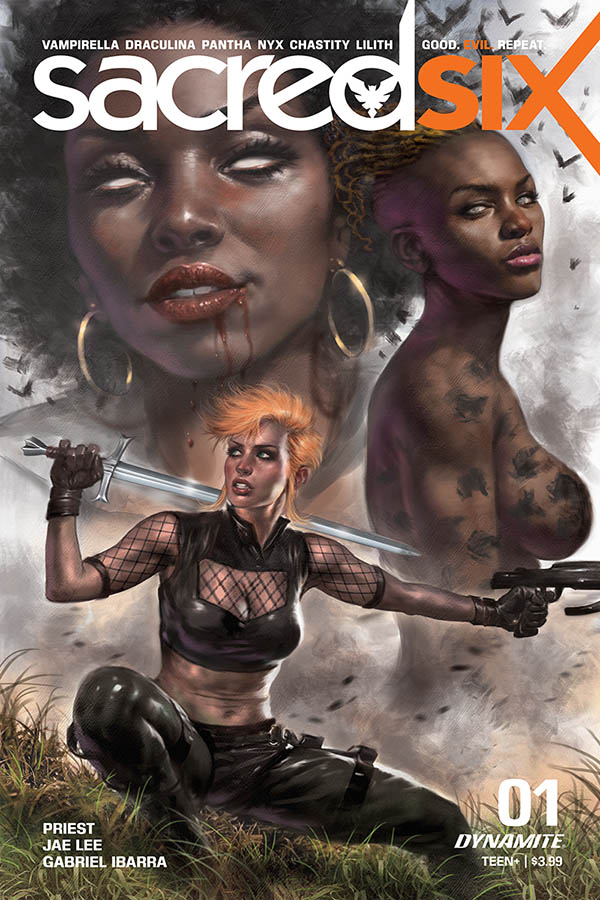 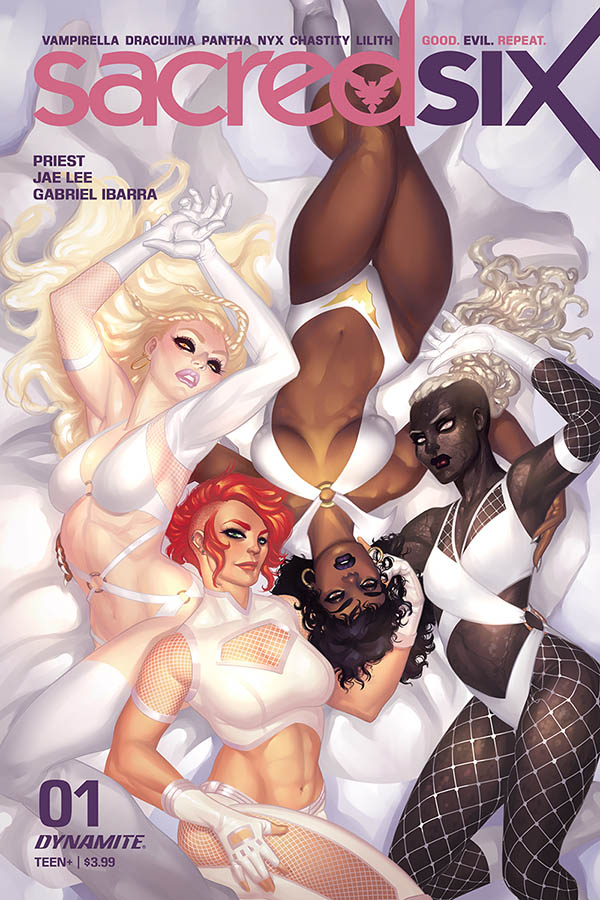 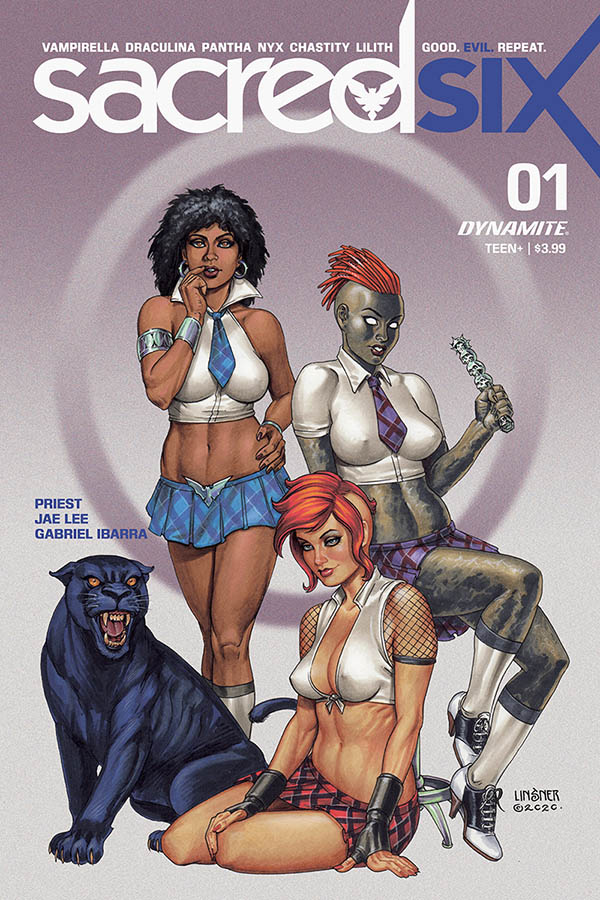 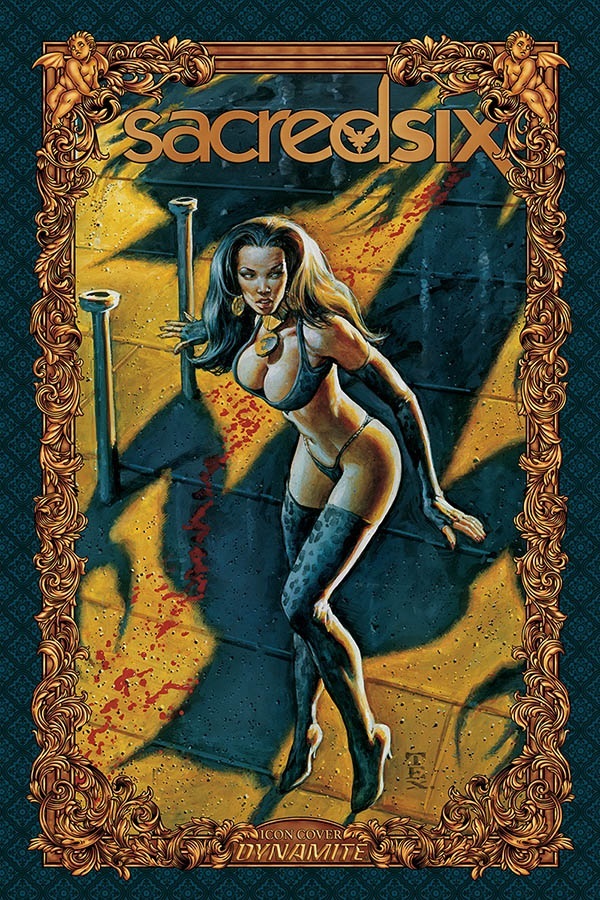 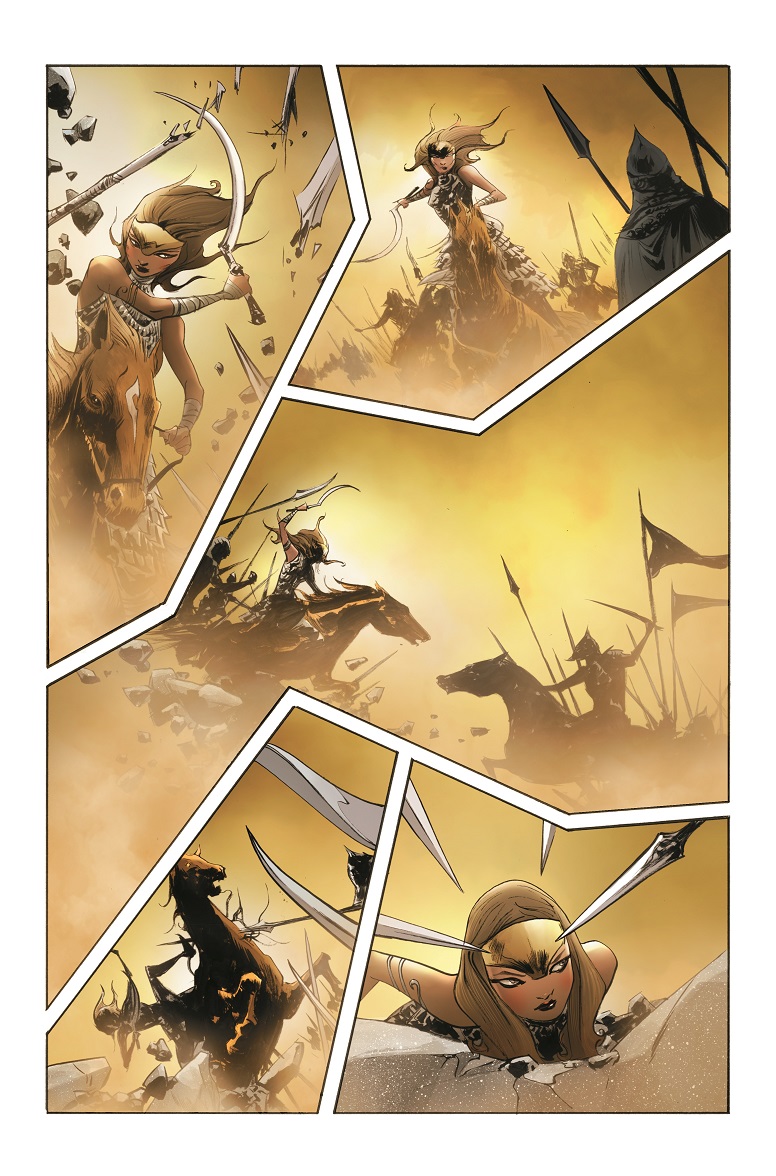 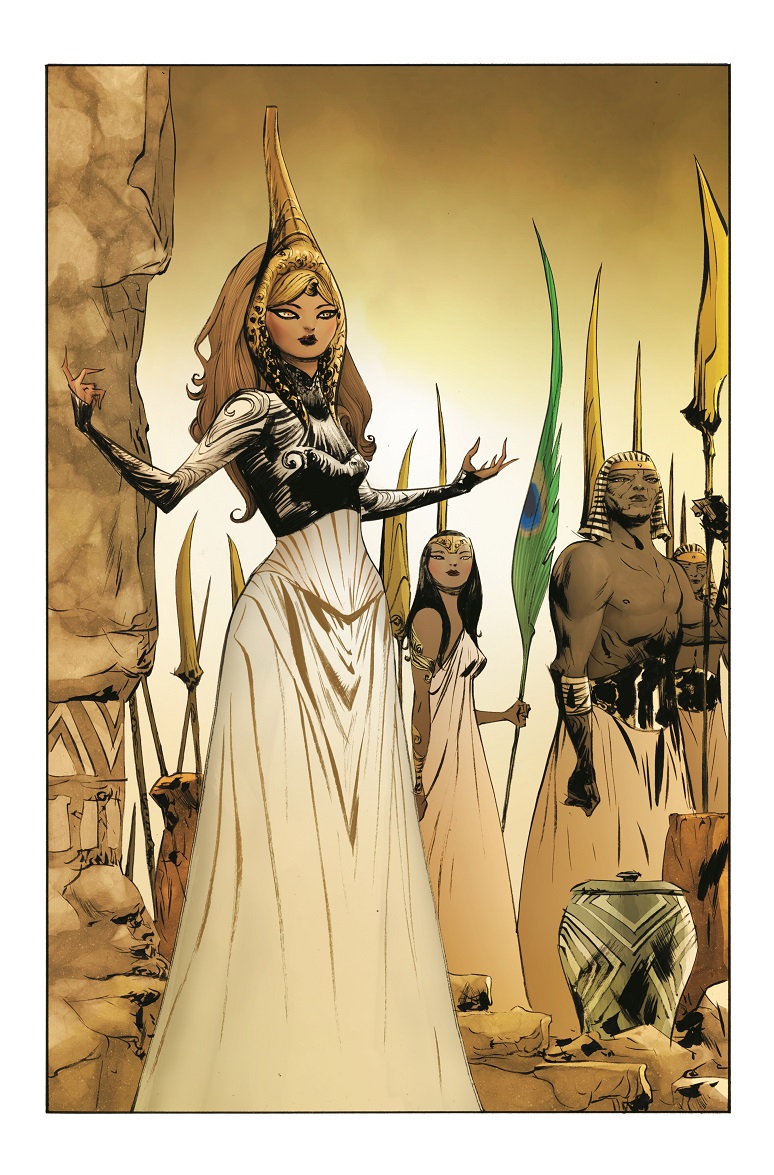