Jack Frost does more than nip at your nose in the black and white one-shot And It Snowed! Creator Nick Bryan explores the concepts of his Monochrome Trilogy offered through his latest Kickstarter.

Exploring the wonders (and struggles) of SNOWY CITIES, And It Snowed is a 32-page character-driven urban fantasy. The story revolves around Sam and her brother Luke as they struggle against a supernatural snowstorm and a loan shark who wants them to pay back their debt by stealing a magical artifact owned by Jack Frost himself!

I spoke in-depth with creator Nick Bryan about And It Snowed, the rest of the Monochrome Trilogy, and his other works.

Bryan: It’d be disingenuous to downplay the role of budget in that decision—I wanted to get some full-length comics out there, and especially since I self-funded the first two, making them black and white and only 20 pages helped make that possible, before expanding to 32 pages and Kickstarter for this final one.

But once I’d made those decisions, it became a creative challenge—what stories would work in that format, rather than being compromised. That format and length led me to small, contained stories of strange things happening to a couple of people, because the black and white lends itself well to both this focused intensity and a feeling of slight unrealness—whether it’s the grim reapers in Little Deaths of Watson Tower, the rising surrealism in Moonframe, or the pursuit of Jack Frost in And It Snowed. 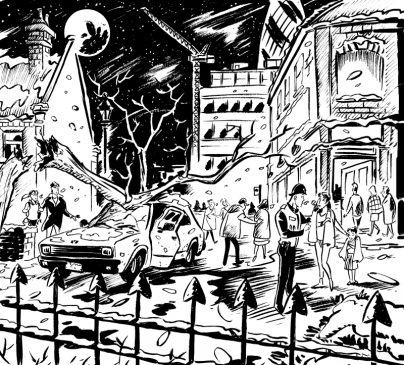 Me: For And It Snowed, you’re focusing on SNOWY CITIES. What about them made you think black and white and what is their significance in the story?

Bryan: Again, the black and white came first—I think my hope with the snowy cities for this final one would be that the black and white could play an even more fundamental role. The idea was that the white would slowly take over from the black as the two characters’ journey wore on and they became more and more bogged down by the snowfall.

Not to mention, I knew I wanted to work with Robert Ahmad again and he draws an amazing Darywn Cooke-esque cityscape, so I aimed to lean into that hard. I was thrilled to discover he’s equally good at snow.

Me: Who are Sam and Luke and how can readers identify with them?

Bryan: Sam and Luke are people running away from their problems, just like they’re running away from Jack Frost. Like a lot of crime protagonists, Sam and Luke (especially Sam) have fallen into this situation through a series of bad decisions and found themselves, almost without realising it, in an awful place and unable to just walk away.

Which is something a lot of people can probably relate to, both through some of the traps in society and, of course, more recent virus-related incidents.

Me: How did you find your creative team and decide they were the perfect force to bring together And It Snowed?

Bryan: Robert Ahmad was among the first artists I worked with, after finding his work on the old Millarworld forum—And It Snowed is our fifth separate collaboration, including three short stories. As I said earlier, I knew I wanted to work with him and the comic was written with Robert in mind, focusing on character emotion and cityscapes as they’re among his big strengths.

And letterer DC Hopkins was actually suggested to me by Robert for our earliest comics, and I enjoyed working with him so much that he’s lettered a lot of my work ever since, including multiple shorts and the Moonframe one-shot from the trilogy. He brings a lot to every page, plus some great design work on the overall package. 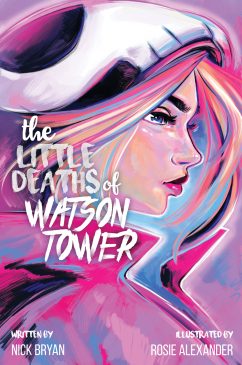 Me: What can you tell us about the previous one-shots that fans of this campaign can also enjoy?

Bryan: The Little Deaths of Watson Tower was the first full-length comic for both myself and Rosie Alexander. It’s about a group of kids hanging around a tower block in London, finding themselves turned into tiny grim reapers and forced to confront death on a few levels. I poured a lot into it, just in case I never got to make another comic again, which gave it an emotional rawness I enjoy, and Rosie’s work is beautiful, visceral, and atmospheric.

Moonframe is a scifi horror about the moon being turned into a giant cloud storage device, and two astronauts trapped inside it. A lot of my stories tend towards the emotional journey, but although Moonframe doesn’t lack humanity, it adds some higher concept surreality and people stabbed through the head, and Lucas Peverill made it all seem terrifyingly real. He and DC Hopkins also did a great job of some slightly odd text-based internet horror sequences.

Me: You’re also offering a one-shot you wrote, The Catalyst. What can readers of And It Snowed expect to enjoy in this other story? 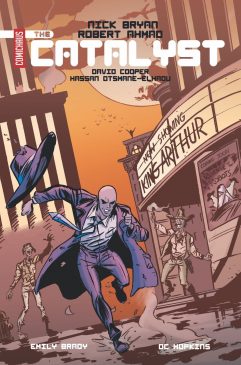 The Catalyst is about a robot named Guy whose function is to help kickstart the stories of other, more important protagonists—basically a video game NPC. He travels across genres, making things happen, inevitably getting beaten up, and over time, he starts to want more from his life.

It was another collaboration with Robert, this time joined by colourist David Cooper and letterer Hassan Otsmane-Elhaou, and playing to his extreme flexibility in portraying different genres in his art while maintaining the consistent character emotions that make the story work. You’ll believe a robot can travel from crime to fantasy to horror to superhero stories and beyond, all while questioning his purpose in life.

It’s a really cool, beautifully put together book, and the whole team came with us on the genre-switching premise, which made it great fun to work on.

Me: What is the number one reason why people should pledge money to your comic book? 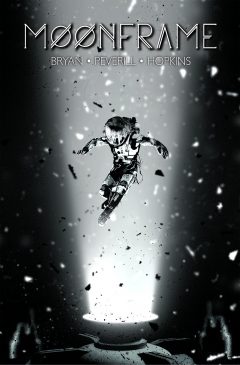 Bryan: I think And It Snowed offers a genuine emotional journey, a real done-in-one experience, as well as providing a showcase for an artist who I genuinely think is one of our big up and coming comics talents.

Bryan: It’s not the newest hottest take, but I think starting small is definitely the way to go, at least at first. I am finally revving up to some longer projects, but beginning with these short stories and one-shots has done a lot to build my confidence and momentum, letting me enjoy the experience of finishing my stories.

And if you can bring them all together as some kind of broad trilogy at the end, even better.

Me: Thanks for sharing a bit of your monochrome world with us, Nick! If you’re reading this and interested in stepping into this black and white one-shot world, check out the And It Snowed Kickstarter here.

Do you have a crowdfunding project? Want to be interviewed about it and have the project featured on “Kickstart/IndieGogo/GoFundMe the Week?” Let me know in the comments below or message me on my website. Also check out the official Kickstart the Week: Interviews with Comic Book Kickstarter Creators Volume 1 on Kindle and Etsy!