Are you ready to explore the multiverse? Join Miranda and her shark-dog Noodles as they travel different dimensions and through different art styles! I spoke about the upcoming Action Lab Entertainment series with the creator/writer of Miranda in the Maelstrom, Riley Biehl!

This ongoing action/adventure series revolves around Miranda and Noodles as they repeatedly enter the “Maelstrom,” a supernatural storm that allows them to travel across dimensions. They meet numerous friends and foes during their travels, but when they’re separated from each other, will they be able to come back together? Or will Miranda’s traumatic past, present, and future catch up with her?

This is the first comic book series created and written by Riley Biehl, which Ariel Baska of Comics Bookcase calls “a winning work of imaginative sci-fi…” The art style changes as Miranda travels to different worlds, meaning numerous artists offer their talents to this title, including:

The series letterer is Taylor Esposito (EXORSISTERS, RED HOOD AND THE OUTLAWS). Lastly, the book is edited by Brittany Matter with assistant editing done by myself.

Miranda in the Maelstrom is currently available digitally-first on comiXology and the first issue will be in comic shops this October (order with code JUL200968). But let’s explore the universe even more with this in-depth review of Riley!

Me: What can you tell us about the titular character Miranda and her trusty shark-dog noodles and how can readers identify with her?

Biehl: Miranda is the lone survivor of a dimension destroyed by the Multiverse Maelstrom. Lost out in the multiverse on her own, she starts out desperate for a “found family” and any sense of belonging she can find. As the last of her kind (or is she?) she feels a sense of isolation and loneliness that drives a lot of what she does. While the story was written years ago, I think everyone can relate to some sense of isolation right now if they didn’t before.

Miranda’s shark-dog Noodles is her best friend, companion, and support system. For all the inconsistencies Miranda encounters in the multiverse, her and Noodles’ love for each other is a constant. He’ll do anything to protect her and she’ll do anything to stay with him. All pet owners can identify with that.

Me: Miranda in the Maelstrom explores a lot of different locations. Of the places Miranda goes in the first story arc, which one is your favorite and why?

Biehl: My favorite location is probably the post-apocalyptic world in issue #5. It’s ruled by inanimate objects that hate humans so I wouldn’t want to live there, but I had a lot of fun writing that world and the evil inanimates that live there. If I could, I would have spent more time there in the story but Miranda likes to keep moving. Maybe we’ll find our way back there someday. 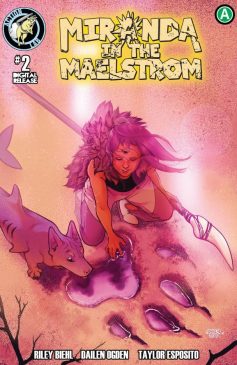 Me: You have multiple artists throughout the first story arc of Miranda in the Maelstrom. Why did you decide to take this approach? And what can you tell us about each artist and why their art style fits each particular part of the story you chose for them to draw?

Biehl: One of the earlier drafts I had for Issue #1 featured two stories in one before I eventually decided to break them up into #1 and #2. At that time, I thought it would be cool if the flashbacks Miranda was having had a dramatically different art style as a contrast between her past and present. It was a cool idea, but the script wasn’t working until I made some big changes and broke it into two issues. Issue #1 ends with the young Miranda stranded in a foreign dimension and so I decided that the art style could change at the end of each issue as she enters a new world.

I’m very lucky to be working with all the artists on Miranda in the Maelstrom. They each bring something unique that perfectly matches their respective issues. They’re all very different artists, but what they have in common is a talent for mixing action and emotion!

Issue #1 artist Koi Carreon and colorist Borg Sinaban created a colorful and energetic style that mimics Saturday morning cartoons with a pinch of anime. It’s very kinetic and like a good cartoon it’ll wake you up in the morning.

Dailen Ogden on issue #2 brings a more quiet beauty in her art. Dailen created a wasteland world that feels massive in scale and strangely isolating, but with colors and environments that keep the feeling optimistic. Miranda may be stranded in a harsh environment, but its beauty shows us that this is just the beginning of her adventures. 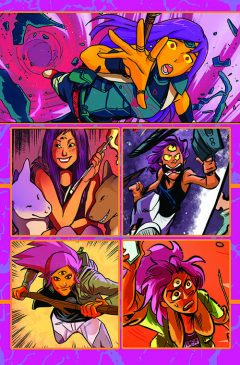 Jamie Jones on issue #3 offers a mix of classic comic strip style with bedtime storybook. His art is dreamy and that’s exactly what I needed for issue #3. The thick lines, cartoonish exaggerations, and beautiful colors created the dream dimension/storybook style I had in mind for “Sail the Spinning Bottle”.

Drew Moss on issues #4 and #6 is a true modern comic book artist. The kind of talent that mixes superheroes and sci-fi creatures with ease. He was the perfect artist to bring the IDEA organization, with its many species, to life while displaying the isolation and loneliness Miranda feels while she’s employed by IDEA.

Tintin Pantoja created a wonderful cartoon world in issue #5 with characters straight out of a Pixar film but set in a post-apocalyptic world where inanimate objects killed off humanity. Her art does a wonderful job portraying horror as cutesy humor.

Me: There are also a ton of fun supporting characters throughout the series. If you had to pick three to hang out with for a day, which three would you pick and why?

Biehl: I’d probably start the day with Smokey from issues #3-4 since he’s a kind and supportive friend. Then hit the town with the mysterious, and possibly insane, vigilante Web-Wing and maybe fight some crime. Then I’d end the evening with Captain Cloud from issue #3 as he’s a dream-being that can gift you with sweet and vivid dreams before bedtime.

Me: If you had to work for IDEA like Miranda does in the series, what would you do for them and what would a typical day look like for you? 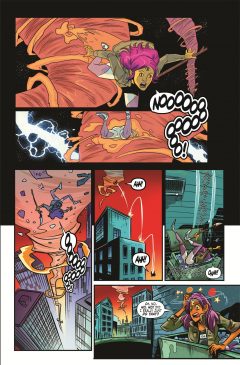 Biehl: I have worked for a couple of IDEA-like agencies in the past. If I did the same thing for IDEA I did for those companies, it would probably be a lot of data-entry that seems exciting at first but becomes very tedious. I get to catalog and describe all sorts of interdimensional aliens and creatures which is fascinating until all the people impacted by the maelstrom just become numbers in a system.

Biehl: There’s a lot of different ways to “break in” and get your story published, and it’s easy to get your heart set on one certain way. Maybe you dream of working with your favorite publisher on your first book. Things rarely work out as we dream, so part of your process needs to include preparation for failure so you can figure out where to go after. There are a dozen paths to publication and many of them overlap, so be prepared to get lost on the way! As long as you believe in your story and your characters, you’ll find a way to make it happen.

Me: Thanks for your time, Riley, and congrats on your first comic book series! Again, people can currently order the first issue with Diamond Item Code JUL200968. If you can’t wait, check out the six-issue story arc on comiXology here.