Cut-Man is described as “a love letter to noir and thriller cinema.” The six-issue mini-series is inspired by the works of Tom King (Mister Miracle, Vision), Scott Snyder (Batman), and Grant Morrison (Animal Man). It also takes inspiration from noir and thriller cinema, such as the works of David Fincher (Se7en and Gone Girl). We get a peek behind the introspective curtain of this digital-first title from creator/writer Alexander Banks-Jongman.

Hank Kelley cannot die—but his superpowers do not make him a superhero, for he is a broken man trying to find his way in the world and possibly cash in on his extraordinary abilities. On the opposite end from him is detective Rosalind Lovejoy, who discovers there may be a deadly secret behind Hank’s powers.

The series is the first comic book created/written by Alexander Banks-Jongman with artwork by Robert Ahmad (Headless, And It Snowed). The book is lettered by DC Hopkins (THE O.Z., And It Snowed) and edited by myself. It is being published digital-first on comiXology by Action Lab’s mature Danger Zone imprint. Three issues are available so far on comiXology.

Enjoy my in-depth talk with Alexander Banks-Jongman below.

Banks-Jongman: The elements of noir cinema are represented in the colour scheme of the book. The blue colour reflects this theme of sadness and a noir aesthetic.

Thematically, the comic deals with self-introspection, with noir fiction often focusing on the grizzled leads’ dark pasts and attempts to better themselves. In contrast, Cut-Man sees Hank Kelly become increasingly a worse person. The elements of the thriller genre are presented in the darker narrative and the mystery being investigated by Rosalind Lovejoy. The complexity of the characters is related to this noir style, with old noir stories focusing on character motivation and meaning. 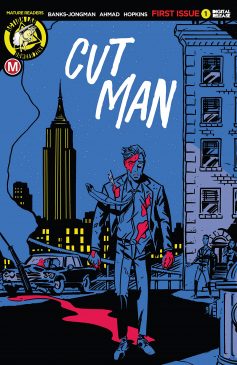 Me: Since Hank Kelly and detective Rosalind Lovejoy are our leading characters, and Cut-Man is an exploration of broken people, in what ways are Kelly and Lovejoy broken and how can readers relate to their struggles?

Banks-Jongman: Hank Kelly is the kind of character it is hard to root for, but should be easy to relate to. Initially—before diving off at the deep end—Hank is a failure, but one whose failures come from his mental illness, his depression. At first, the readers can understand what he’s going through and why he’s made the mistakes he’s made. However, eventually, he’ll lose any sympathy.

For Rosalind, she’s broken by the trauma experienced at the end of the first issue. This trauma turns her into a focused machine, hell-bent on bringing Kelly down. She’s broken, but not down for the count. I think this makes her the character you root for, as we see Hank do terrible things—Rosalind is our hopeful and noble hero. 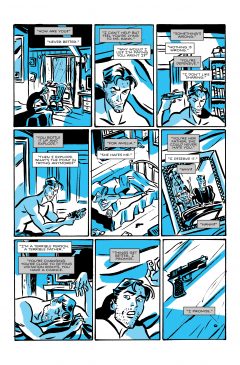 Me: When were you first inspired to create Cut-Man and can you take us through a bit of your process when developing this concept from just an idea to a fully-realized comic?

Banks-Jongman: Cut-Man first came into existence with a largely different cast of characters—but with the same central concept: a character whose immortality comes with the cost of someone dying in his place. Initially, the series followed a younger protagonist, but eventually, I came to prefer the idea of the lead having a main emotional focus, which I decided would be his daughter; however, the characters had to be aged up to accommodate this new emotional crux. I then imagined what it would be like if a person was really immortal and famous—how would the public feel? What would they do with the fame?

The first signs of the concept being lifted from just a script really were felt when I saw the first drafted pages by Robert Ahmad. 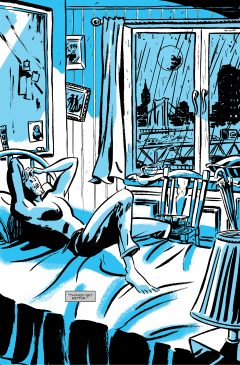 Me: How did you find your creative team for this project and determine they were the perfect people for Cut-Man?

Banks-Jongman: I trawled through forum after forum trying to find someone who had an art style that would fit the tone of the book. Robert Ahmad truly stood out from the rest, and it was Ahmad who led us to David Hopkins the letterer—I think they’ve worked together before. It felt like a dream team; each of them was really experienced and helped me learn the roots. Robert lifted the characters from the page, giving them designs I hadn’t thought of—and adding to the background world. David was also key, formatting the pieces to be ready to publish and giving the dialogue a dynamic punchiness in the lettering. 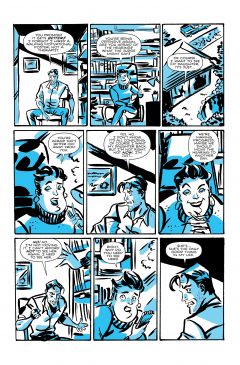 Me: You decided to go with a unique color palette for this book. How would you describe this style and why did you choose to go this route with the book rather than black-and-white or full-color?

Banks-Jongman: We had initially decided to go full colour—however, when we drafted the pages, the monochromatic scheme—with the blue—really popped. Thematically, it is linked with the overall motifs of darkness, sadness, and mental illness—with blue being this deep shade, representing inner pain. With the world around Hank representing his inner pain and depression, it really added to the message. 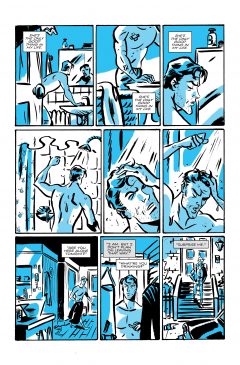 Me: Are there plans for the subsequent Cut-Man series after this six-issue story arc? If there are, what can you tease us with? If there aren’t, what other comic book projects will you be working on soon that readers can look forward to?

Banks-Jongman: Currently I have no plans to have a sequel to the book—though I definitely have some ideas of where I’d go next, perhaps asking the question: if a man cannot die – what happens after everything decays and passes away; what happens after the end of the universe?

I am working on another series, however, with a new team. The book is tentatively called Enter God, the main idea being: if god came to us and told us we had no purpose, what would we do? How would the world react to the truth that nothing matters? 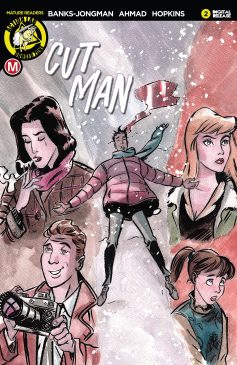 Me: Why did you decide Action Lab Entertainment was the right publisher for your series?

Banks-Jongman: Action Lab and the Danger Zone imprint really suited the book. From their past comics, like Zombie Tramp, I knew Action Lab was not afraid to push the envelope, to go far. You’ll see from issue four that Cut-Man goes to dark places. Action Lab was the perfect home for this book and I am grateful for them giving me the chance to show it off.

Banks-Jongman: The best advice to someone who wants to get something out and published is to just keep trying. Persevere. Don’t ever sit on your hands and wait for someone to headhunt you or scout you out—just try, get your work out there and see how people react. It is a great relief and incredible feeling to see your work published and to have people enjoying it. So yeah, I would say—just keep trying—step out your comfort zone and show the world what you’re working on. 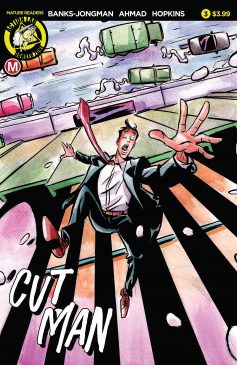 Me: Plug yourself! Where can people find you and your works?

Banks-Jongman: I would say to keep an eye on my comiXology page, for the final issues of Cut-Man and whatever else may appear. I have an Instagram, where I have been posting all my updates to Cut-Man, new art pages, and shoutouts to reviewers, @jongmanali. Keep a lookout on comics websites, in case my name appears on a new book.

Me: Thank you for this thrilling look at Cut-Man, Alexander! Readers interested in checking out the series can subscribe to it on comiXology.