A space western, The Ignis Quadrant comic book series began as a successfully Kickstarted tabletop RPG. The series takes inspiration for its world and characters from science-fiction works ranging from Star Wars to Firefly, spaghetti westerns, and pulp staples such as Back to the Future and Indiana Jones. I speak in-depth with creator/writer Evan Carothers about his long-spanning creation of this world.

Readers interested in taking a look at the space western can check out a free prequel issue of The Ignis Quadrant (chapter 0). The series features hard-drinking, foul-mouthed gunslinger Montana Bones and a spec-ops droid with a human host known as Mace. At the beginning of the Novus Landing story arc, which will span five full-length issues, the two are drinking at Crazy Rita’s when a local gangster and a brilliant scientist with a memory problem barge into their lives.

The Kickstarter campaign is seeking to raise $4,000 by December 9, 2020, at 1:33 PM EST. Rewards include digital ($4) and physical ($7) copies of The Ignis Quadrant’s first chapter, a special longer issue with the prequel story spanning 40 pages in total ($10), and lastly a limited double-page wraparound cover version of the physical issue ($20). Readers can check out the reward tiers on the official Kickstarter campaign page.

I spoke in-depth with creator/writer Evan Carothers about his sci-fi world spanning from a tabletop RPG to the comic book featured in the Kickstarter.

Me: You’ve previously developed the world of The Ignis Quadrant through a tabletop RPG, starship, and board game (currently under development). Can you tell us more about the journey this world has taken over the years through Kickstarters and beyond, including its initial inspiration?

Carothers: I’ve always been in love with sci-fi, particularly the classics like Firefly, Star Wars, etc. For the initial Ignis Quadrant project (3D printable tabletop gaming miniatures and terrain), I wanted to create a ton of interesting and unique characters and scenery to make a unique world that felt old and lived-in. As I would create new characters and scenes, the backstory would roll around in my head and the threads would come together for the world-building.

Then for the second project in the world—the Terra Conflict—I explored the starships, stations, and beasties that would exist out in the black. This allowed me to further flesh out the factions and groups of the world. The story idea for the comic was building organically throughout both those projects, and the board game—and future comic arcs—will all tie together. 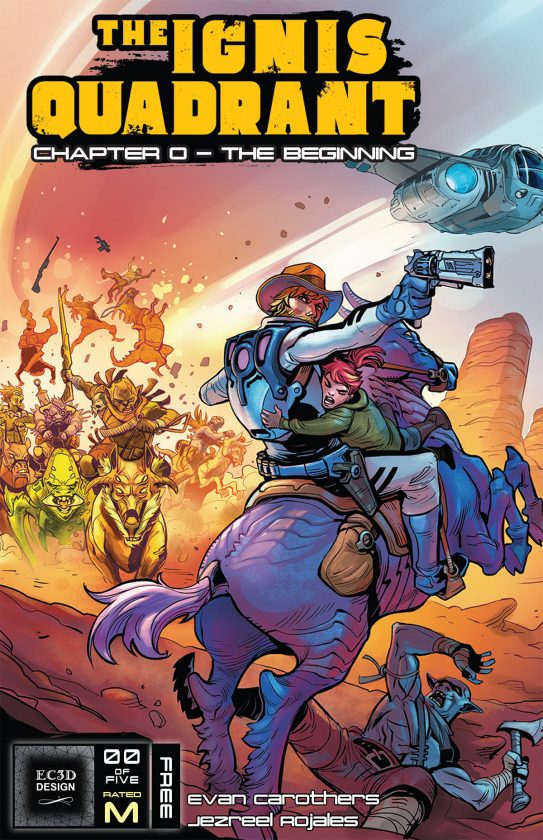 Me: What inspired you to marry the western and sci-fi genres together?

Carothers: My grandfather would always watch westerns when I was younger, and I always loved the idea of the morally good gunslinger—a man with (sometimes) heroic properties, but a ton of jagged edges and flaws. Space, like the wild west, is a rugged frontier after all. The tropes of a good western work perfect in space—lawlessness, gangs of bad guys, settlers, lawmen, vast landscapes, and more. Plus, my personal sense of humor works great for an asshole cowboy, so I figured it would make the writing a bit easier!

Me: You mention on the Kickstarter that The Ignis Quadrant will have tasteful adult humor and lewdness. How do you go about making the humor tasteful and what comedy influences would you say the series has?

Carothers: “Tasteful adult humor” is intended partially to be tongue-in-cheek, but does also describe what I strived for. The humor in the book is a reflection of my own sense of humor. The situations that happen in the story can be dire ones, but Montana, the central character uses humor as a shield and is an ingrained part of his personality. I wanted the humor to feel mature in nature—like sharing a joke over beer with buddies, while not being tacky. From a comedic tone and timing standpoint, it’s not far off from flicks like Indiana Jones, Guardians of the Galaxy, or Star Wars—those fall squarely in the action genre, but have tons of great laughable moments. 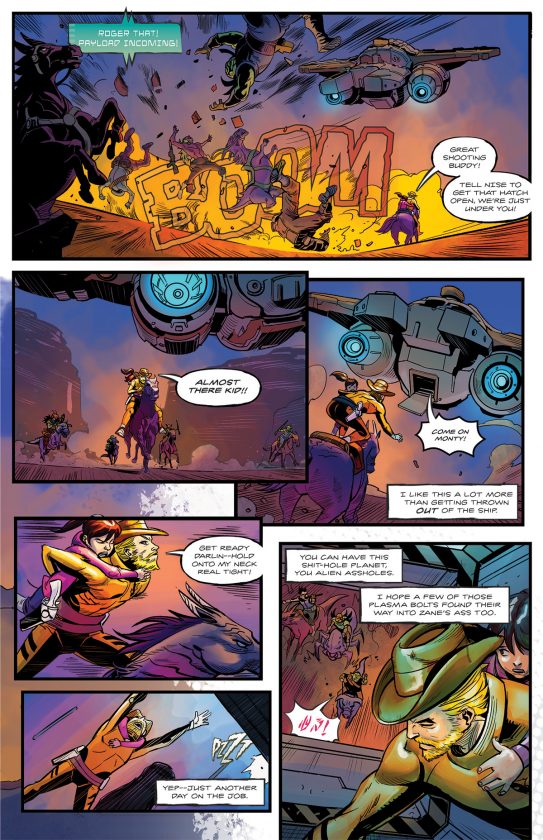 Me: After talking a bit about Montana Bones and Mace on the Kickstarter, what is their relationship like with each other?

Carothers: I don’t want to give away too many surprises about the backstory. Mace is a spec-ops droid with a “free will echo implant” —a process whereby, using a rare mineral, the spirit of a dying person can be implanted into a droid to give them real free will. Unfortunately, the “echo” has some side effects from the origin person, and the only one Montana was able to get his hands on was an elderly, alcoholic grandmother. This leads to some odd behaviors and outbursts at times from Mace—sometimes to Montana’s delight or chagrin.

Their fighting styles complement each other well, and they have a deep level of trust developed from past situations that the story will explore. Both are kind of dejected and down-and-out, from things in their past, and are kindred spirits who are kind of floating along in the world with no purpose.

Me: What other characters can we enjoy that will be making an appearance in the first issue of The Ignis Quadrant?

Carothers: The main antagonist of the first story arc is a powerful local crime gang, known as the Cinders. Their leader, his black-hearted girlfriend, and a few other members are central characters in the story, and they are as evil as they come. Jula, a genius ex-scientist with some memory loss issues is also one of the main characters. You also get introduced to some of the locals that work at Crazy Rita’s, a cantina that’s central to the story. A few characters are introduced in the free prequel issue who are core to the story as well, some of which make a repeat appearance in issue #1. 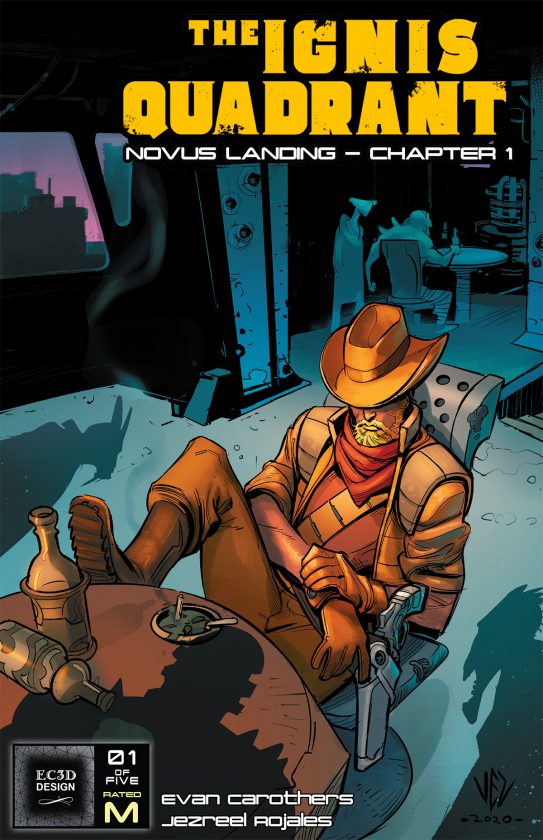 Me: As a black belt in Brazillian Jiu-jitsu, you’re putting your experience to good use by writing some awesome hand to hand fight sequences. Can you tell us a bit about this process and why you feel you’ll have an edge over other hand-to-hand fight sequences in comics?

Carothers: I have always loved martial arts in movies and comics, but after learning actual martial arts for over 10 years, I have come to realize that there’s tons of amazing things that are never properly represented but are really cool. I think this often just comes from writers’ martial arts knowledge being based on what they have seen in movies/etc, but a ton of it just would not actually work.

For the first issue, Mace has one small fight scene where I was able to draw upon actual moves from Judo, Jiu-jitsu, and Muay Thai (all of which I have trained) and create a scene that could actually be executed by a martial artist in real life but is still exciting and fun on the page. For future, more complex movements I plan to even record myself demonstrating moves to share with Jez, my artist, to translate into the sequential art. With Brazillian Jiu-jitsu as my primary martial discipline, I’m very interested in things like leverage, joint manipulation, throws, etc — all of which I hope to translate to the page. 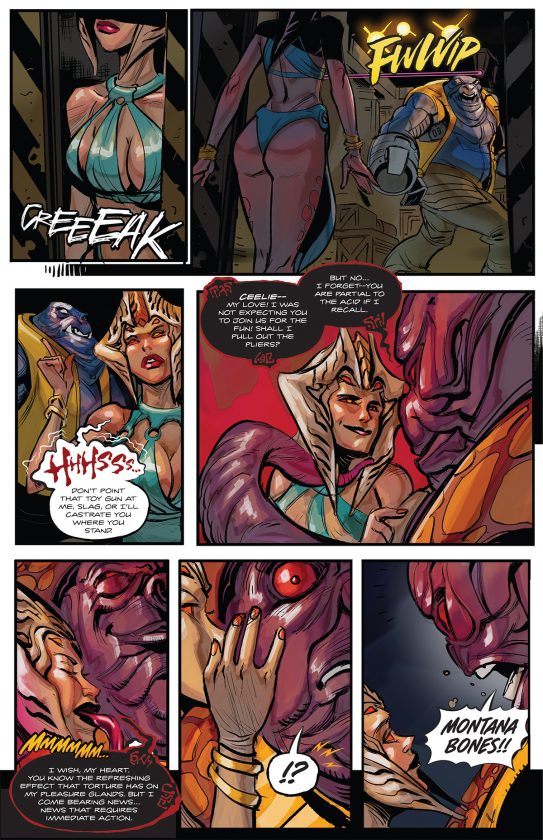 Me: Having done this Kickstarter during a pandemic, what are some things that came up during your campaign that were unexpected? Is there anything you think creators planning on doing a crowdfunding project should be aware of before launching due to the current climate?

Carothers: Kickstarter and other crowdfunding sites like to claim that funding hasn’t decreased recently, but as somebody who has done 8 Kickstarters I tend to disagree. At the beginning of the pandemic, folks were scared and not sure how long things would last, if their employment or savings would be effected, and more-—so we definitely saw much less discretionary spending.

But now that we have (almost… hopefully) turned a corner and can see some light with a possible vaccine, folks seem to be more optimistic and willing to spend some of their hard-earned money on things like comic books. I know that I personally spent a ton on them during the quarantine—reading comics when you’re stuck in your house is a perfect activity!

Timing always is a factor though, and with the holidays coming that always affects funding as well. From a success standpoint, I would have been better served to launch my project in Jan or Feb, but I just couldn’t wait to get it out to the world, and set my expectations accordingly. As a self-publishing, indie creator, things like social media, networking, and reviews/previews/etc. are very important to drive awareness (like this lovely piece in Comic Frontline, so thank you so much for that!) 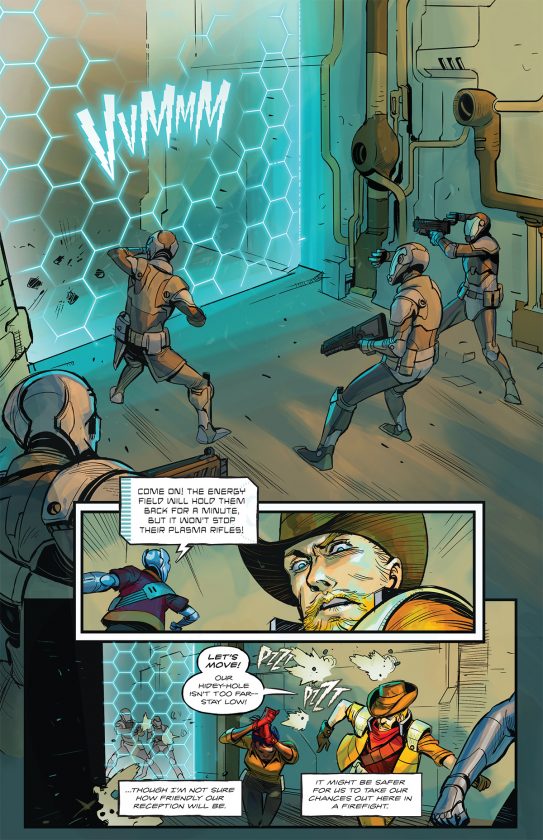 Carothers: I have asked many folks who read early versions of the comic what their opinion was, distilled into one word, and repeatedly I have heard the same answer: FUN! If you are the type of person who likes to read comics that leave you with the opinion that it was a fun read, then The Ignis Quadrant is for you!

Carothers: This is my first go at writing comics, and it has been so, so much fun! If you have an idea, get it on paper and refine it. Even writing one page of my comic before work with a cup of coffee each day was unbelievably rewarding, and watching it take shape was a very therapeutic outlet creatively. Even had I never published it, the act of creating it was rewarding as hell, and you should do it!  And one small piece of advice, absolutely get a good editor. That’s a game-changer.

Me: Thanks for sharing your sci-fi western world with us, Evan! If you’re reading this and interested in discovering more out-of-this-world adventures in The Ignis Quadrant, check out the Kickstarter here. 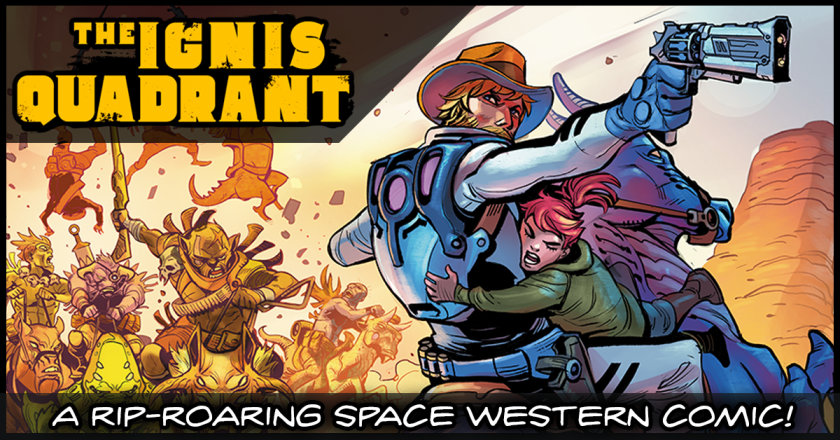 Do you have a crowdfunding project? Want to be interviewed about it and have the project featured on “Kickstart/IndieGogo/GoFundMe the Week?” Let me know in the comments below or message me on my website. Also check out the official Kickstart the Week: Interviews with Comic Book Kickstarter Creators Volume 1 on Kindle!

And It Snowed – an epic journey across a cold town