“Though he’s presumed dead at the end of Lovecraft’s original tale, nothing can keep the mad scientist Herbert West down. He’s back and with his reanimation serum stolen, he must travel to the infamous town of Innsmouth, home to degenerate townsfolk and dark gods alike. This story is full of monsters, scares, and surprises for both longtime Lovecraft disciples and new readers. It will kill off all expectations for what readers think they know about Herbert West, only to reanimate them with something new and terrifying.”

Luckily, Comic Frontline had the chance to chat with writer, Cullen Bunn, about the campaign. We discuss Bunn’s fascination with the Lovecraft narrative, what it was like to write a sequel for a story in the public domain, and if he’d do more crowdfunding campaigns for his creator owned work.

Comic Frontline: Cullen, why do you think this project was a good fit for Indiegogo?

Cullen Bunn: I’ve never done a project through Indiegogo before, but the folks at Dynamite have worked through that platform many times with great success. It was their call to use Indiegogo, and I’m interested to see how it shakes out.

CF: Why crowdfunding in particular? Will we see this book also available at a retailer level?

Bunn: In addition to individual creators using crowdfunding to bring their books to life, I’m seeing more publishers use the method. In a lot of ways, it’s like a pre-order system. Publishers who use the platform are more likely to take chances on off-the-wall projects because they’ll be able to see right up front if there is interest in the book.

I believe there will be a retailer version of the book. It will likely become available to shops after the crowdfunding supporters receive their books. I’m not sure, though,  what format that will take. 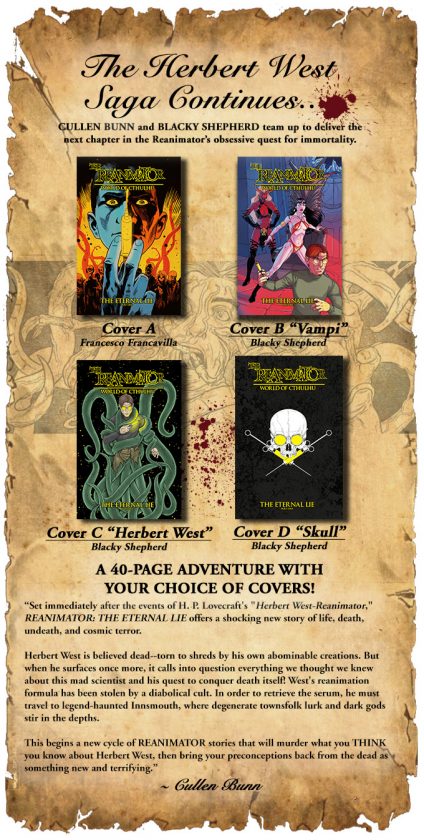 CF: Do you see yourself doing more crowdfunding in the future? Maybe for a creator owned book?

Bunn: Oh, yeah. I have a few Kickstarters planned for the coming year. A few months back, we wrapped up funding on Kickstarter for Democritus Brand and the Endless Machine. Digital versions of the book have been delivered and physical copies are in the fulfillment stage as we speak! We’re going to be doing Phase 2 of Democritus Brand this year. And I have two other creator-owned projects–two others AT LEAST–that I’ll be crowdfunding. Every time I do one of these books, I learn something new, and I am finding ways of making the campaigns more exciting for the backers!

CF: Were you nervous to do a sequel and living up to the original?

Bunn: Maybe a little. I mean, so many writers have taken the story of the Reanimator and done different things with the character, it’s hard to tell what you’re living up to. I mean, Blacky Shepherd and I even pitted the Reanimator against Vampirella in a comic series recently. What was a challenge was stripping all of the excess material away, removing all of the recent stories from the continuity of OUR Reanimator and figuring out what a new story might look like! That’s also where it got to be really, really fun.

CF: How did you want to modernize this story?

Bunn: While our approach to storytelling is more modern, we didn’t modernize the setting at all. That was something I definitely did not want to do with this. A modern approach to a horror comic set in the 20s. That felt right for this tale.

CF: As a franchise in the public domain, how did you want to make your take on Lovecraft different than other takes?

Bunn: Well, the original Reanimator story was something that Lovecraft himself disliked, and it was set apart from any of the stories of the Cthulhu mythos. Most of the interpretations of Herbert West have modernized the character, but they have maintained a healthy distance from the cosmic horror of it all. With this story, we’re taking it back to the 1920s! It takes place just a few years after the horrific events of the original short story. But… we’re also connecting it to the cosmic awfulness of the Cthulhu mythos in a big way. Arkham! Innsmouth! Dagon! Cthulhu! How are these places and deities wrapped up with West’s zombie-creating formula? That’s the story we’re telling here! 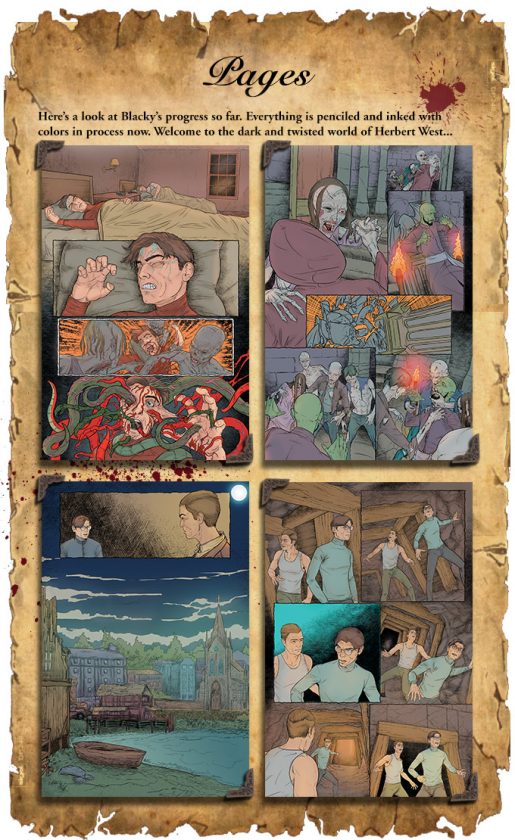 CF: As a horror writer and fan what drew you to Lovecraft?

Bunn: I discovered Lovecraft as a kid, and I was fascinated by this hopeless cosmic realm he created. These indifferent gods who would one day claim the world from insectile mankind. Now, as time went by, I became more and more aware of Lovecraft’s racism and bigotry, and I found it more and more difficult to celebrate the writer. But his contributions to the horror genre are obvious. His imagination influenced fiction, movies, TV, games, and comics in an undeniable way.  With so many fantastic and fascinating stories out there, with so many new interpretations taking shape, the worlds and characters he created remained of interest to me. And so many other writers have enhanced those concepts and told new stories and built upon the mythos. They’ve made it their own. Hell, when I think back, I was reading story after story by other writers who were inspired by the mythology of Cthulhu. I’m still drawn to those characters and to the cosmic hopelessness represented by the characters, deities, monsters, and concepts that were created by Lovecraft and by so many other talented creators since.

CF: Would you like to work on more Lovecraft stories in the future?

Bunn: I’m certainly going to work on stories of cosmic hopelessness and horror in the future. I imagine that most of those tales will follow characters and mythology cycles of my own creation. I would, though, love to continue the story of Herbert West’s exploration of the Cthulhu mythos. I think there is a lot to explore there. And, of course, if there is a story that presents itself featuring Cthulhu or his ilk, if I think I can add something new to the cycle, of course I’m going to give it a go! It all depends on if I think readers will get a kick out of it or not.