Inspired by the likes of Back to the Future and The Terminator, Flytrap is a time travel story about the destructive power of inspiration! I’m talking with creator/writer Caleb Thusat all about his science-fiction journey.

Flytrap is a 60-page standalone one-shot about the creator of time travel, Albert. His invention was inspired by the remake of The Fly (1986), and his future self shows up to help him save the world… by destroying his inspiration!

The creator/writer of the series, Caleb Thusat, is a regular character on Kickstart the Week. We’ve previously showcased his mind-bending Alter-Life sci-fi series, a zombie superhero comic called ZED, and the WWII ghost story Nook. The artist and letterer for Flytrap is Marcelo Biott, the writer and editor of InfraCity. Lastly, the book’s colorist is Robert Nugent, who has worked with numerous publishers including Boom!, Dynamite Entertainment, and IDW Publishing.

Now, let’s leap into the future in an interview with Flytrap’s creator Caleb Thusat.

Me: On the Kickstarter page, you call Flytrap “Back to the Future meets the Terminator trapped in the Twilight Zone.” What is it about these three works that are reflected in your graphic novel?

Thusat: I grew up watching time travel stories like these over and over again. Picking them apart and loving every flaw and every moment. Twilight Zone itself is a huge inspiration in all of my writing. I love sci-fi steeped in mystery, and I tend to think of my stories as perfect for a modern Twilight Zone series. There are many many different takes on time travel, and I love most of them, but I have a special place in my heart for the nostalgic stories that take place in what seems to be one consistent timeline that is effected by anything that is changed in the past. This is what makes Flytrap similar to BTTF and Terminator. It’s a story about a man who knows he must go back and change the past to save the future, and he must do everything in his power to do it, even if it means erasing himself from existence.

Me: What is Albert like and how would you describe the dynamic between him and his future self?

Thusat: Albert is a child prodigy. A genius who is recruited by the government at an early age to develop technology that will change the world. As an adult, he is kind of fed up with the position he has been put in. After so many years of being careful and mindful of what his inventions might do to the world, he lets his guard down and decides to create something for himself. Something he was inspired to create when he was a kid after he saw the movie The Fly. His future self has lived through the chaos his creation brought to the world. He is broken and has spent many years searching for a way to stop the catastrophe he caused. 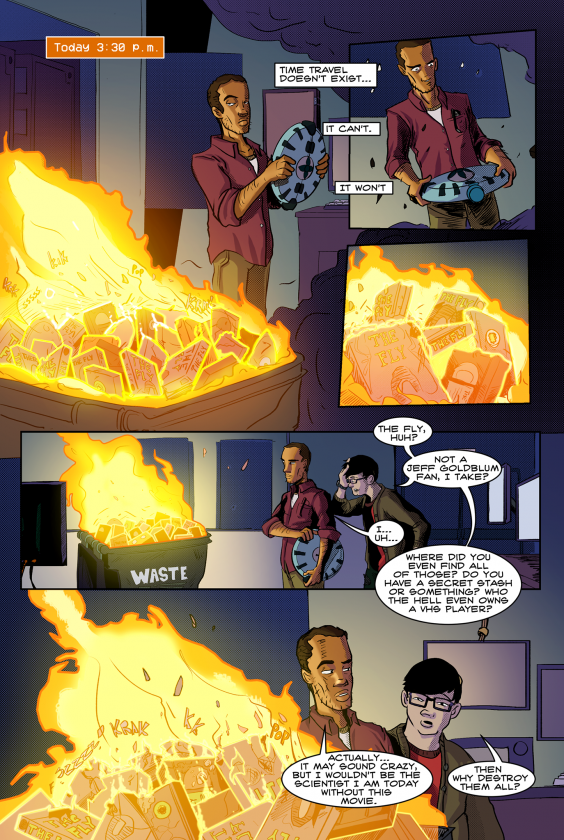 Me: If you could time travel to any point in time (without things going horribly wrong), when and where would you go? Why?

Thusat: I think I would probably go like 1000 years into the future just to see if the world is still there and what it’s like. If I knew the moment of my death though, I would probably jump to my funeral just to scare the hell out of everyone there.

Me: Since Albert is inspired by The Fly, what about that movie inspires you and made you want to include it in your comic as the catalyst for these events?

Thusat: There are a couple of reasons I chose that movie in particular. It’s a story of metamorphosis and carries many themes similar to Frankenstein. The choice mainly came from the idea that something as small as a fly could cause such agony and that a simple mistake could create such chaos. Albert is changed when he sees The Fly as a kid. He sees it as an inspiration and a warning. It shapes his view of science and technology. 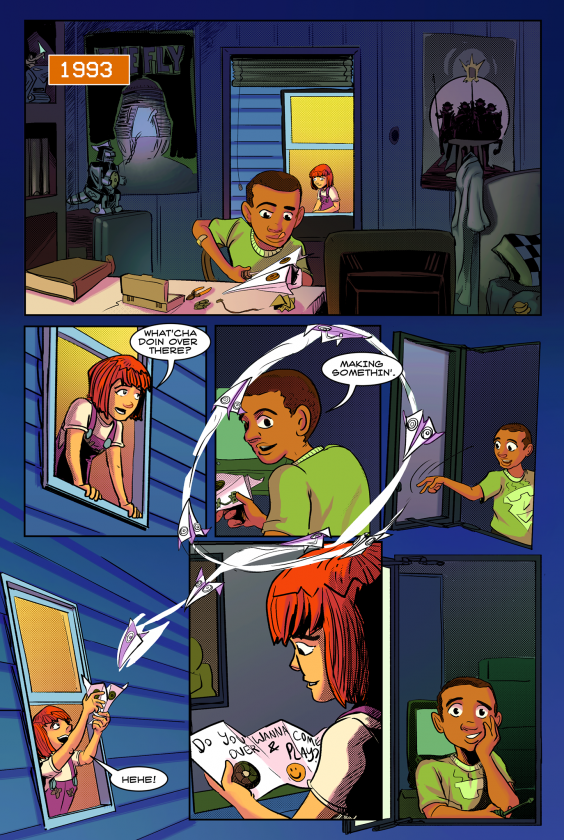 Me: This is part of a trilogy of standalone but connected time travel books. What can you tell us about the other two projects?

Thusat: These stories are all about perspective. I don’t really want to give too much away about the stories, but I can tell you the ideas are very much inspired by the Back to the Future series and how the second movie in particular goes back into the first one to show another perspective. While book one is mainly from the perspective of the middle-aged Albert. Book two will be the story of an older Albert experiencing the destruction of the world around him.

Me: You have a large amount of creator-owned books under your belt, including Alter-Life, ZED, Supercats, and Nook. For fans of your past work on these books, what about Flytrap will remind them of your previous titles and get them excited about it?

Thusat: Flytrap is a return to science-fiction. Alter-Life was my first creation and I wanted to come back to a genre I love with more experience, better artwork, and stronger writing. But while Alter-Life was mostly very serious, Flytrap takes cues from ZED and Supercats and brings a bit more levity to a dark story. It’s really a great mix of everything I have writing so far. 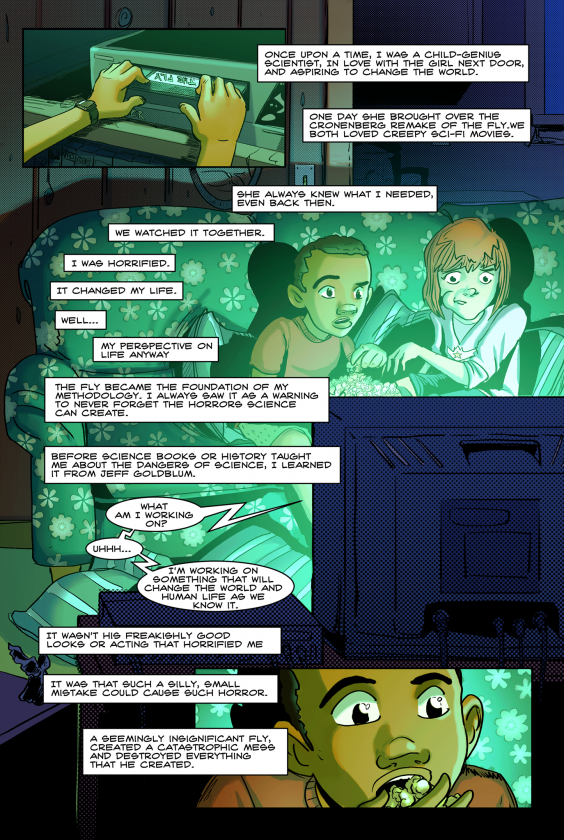 Thusat: This is quite simply the best book I have written so far woven into 60 pages of beautiful artwork for just $15.

Thusat: This might sound cliché, but my best piece of advice is the same advice that has been given to me over and over again. Don’t give up. The more you create, the better you’ll get, and the longer you create, the more opportunities will present themselves to you. I got into this business hoping to sign a deal with my first book like everyone else. Five years later, I finally did with Supercats.

Me: Promote yourself! Let us know what else you’re working on and how we can support you.

Thusat: Flytrap is currently on Kickstarter until 28th at www.flytrapcomic.com, and I have no intention of slowing down on new content as well. Supercats was just picked up by Scout Comics for their new kids’ imprint, Scoot. There will be a lot of new content coming from that deal very soon. There is another kids series in the works AND a modern take on Peter Pan will be coming to Kickstarter some time later this year.

Me: Thank you for taking the time to bring us back to sci-fi! Readers can check out the Flytrap Kickstarter here. 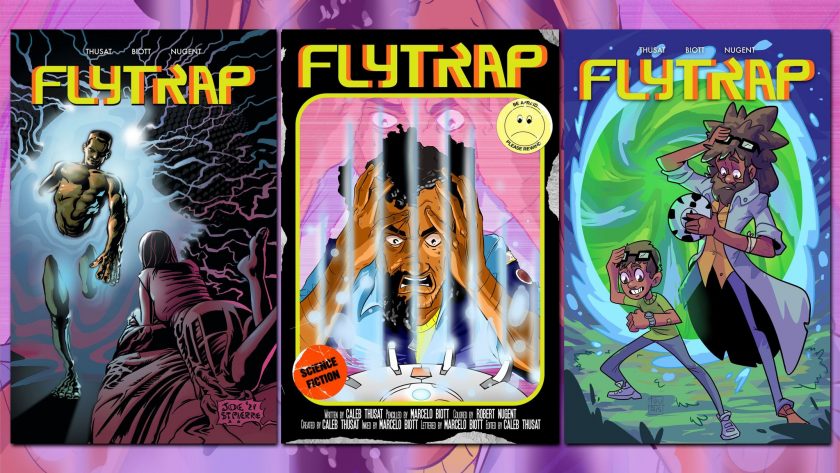 Listen to the brand-new “Kickstart the Week” podcast on Youtube!