A sequel to our previously featured Spores: Prom of the Dead, the zombie apocalypse mixed with Mean Girls is back. It starts out as a zombie story but becomes so much more. I’m talking with creator and writer Dave Dwonch once again about the next part of his coming-of-age horror series.

Spores: The Broken Circle follows the students who survived Pineview Academy’s prom night. People were infected by spores and turned into zombies, making it the worst night of Erika, Travon, and Shauna’s lives. The day after, the three are looking for safety in their nightmarish world. However, the friends they left behind haven’t forgotten them, and they’re coming for them.

The 80+ page full-color graphic novel is the creation of Dave Dwonch, the co-creator of Dark Horse’s Jenny Zero. He is joined by fellow Mind Palace co-creator Santi Guillen, who returns as the artist for the series.

The campaign is aiming to raise $10,000 by March 7, 2021, at 9:34 AM EST. The reward tiers of the Kickstarter allow backers to get a taste of the book by reading the first chapter of Spores: The Broken Circle, which is 24 pages in black-and-white, for only $5. A digital or physical copy of the previous book, Spores: Prom of the Dead is available for $15. Digital or physical copies of the latest book are available for $20. To check out the variety of variant covers and other goodies, check out the Kickstarter here.

Enjoy an interview with the creator himself, Dave Dwonch.

Me: Since this is a follow-up to Spores: Prom of the Dead, what do new readers need to know about that book going into The Broken Circle?

Dwonch: The story centers on the remaining teenagers of the Pineview Academy, who survived the worst night of their lives: Prom Night. In Prom of the Dead, we saw alliances form, friendships betrayed, and the most unlikely relationship form. We fully intend to build upon what we did with Prom and are really upping the drama and horror with The Broken Circle, the second part of an intended three-volume series. Good news if you haven’t read Prom of the Dead—it’s available as a tier and add-on in The Broken Circle Kickstarter.

Me: You’re working with Santi Guillen as your artist again in this issue, who also worked with you on Mind Palace. How would you say your process working together differs between each project?

Dwonch: Well, we’ve definitely found our rhythm as a creative team, but we found that a while ago—we worked with each other weekly on Mind Palace, and it really feels like Santi just “gets it.” There’s a high level of trust that we have for each other, and a fair amount of collaborative give and take. I think the main difference here is the format. Mind Palace needed to be laid out in a specific way to accommodate the online format, so we didn’t get a chance to develop huge moments from page to page. With Prom and Broken Circle it’s the exact opposite. There’s a level of epicness that we’re going for with this series that we just couldn’t quite achieve with Mind Palace.

Me: In my previous interview with you about Spores: Prom of the Dead, you mentioned the personalities of your main duo, Erika and Christina. This OGN features Erika along with Travon and Shauna. What can you tell us about Travon and Shauna?

Dwonch: In Prom it was all about establishing our characters as familiar archetypes and then smashing all of those preconceived notions as we tore the world down. In The Broken Circle, we’re able to sit with these characters, especially Travon and Shauna, to find out what really makes them tick. Shauna and Travon were a part of the “popular kids” clique, but it’s a whole new world. Where they were slightly villainized in part one, here in part two we’ll see how this “new normal” affects them. We’ve all seen over the past year how adaptable kids can be in a pandemic, and The Broken Circle will shine a light on that adaptability—some for good, others for worse. 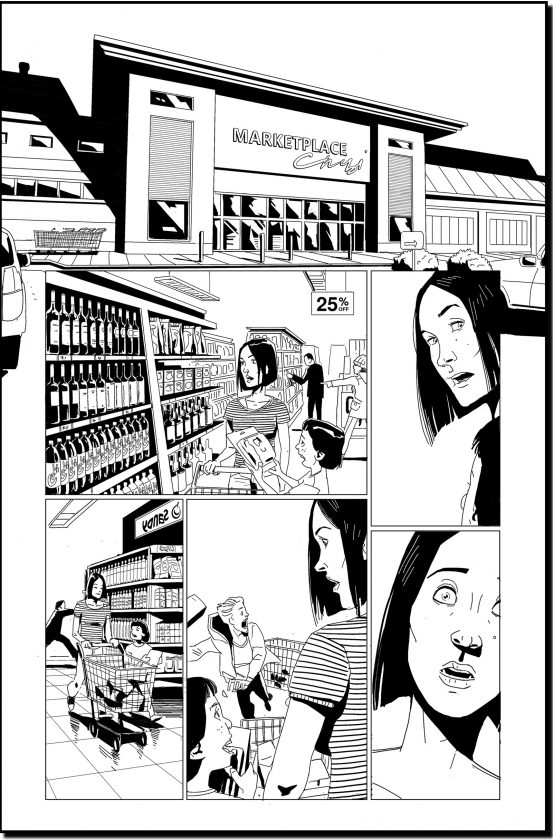 Me: If you had to spend the day with one of your main trio, Erika, Travon, or Shauna, to stay alive during this zombie outbreak, who would you choose to team-up with and why?

Dwonch: That’s a loaded question! Of the three I’d have to go with Shauna. She was a bit of a pain in the butt in Prom, but that night really changed her for the better. Of the three she’s the most capable. There’s a new character in The Broken Circle named Joseph that, without giving anything away, reminds me a lot of C. Thomas Howell’s character Robert in the original Red Dawn. And I have to say—he’s my go-to team-up in the apocalypse. 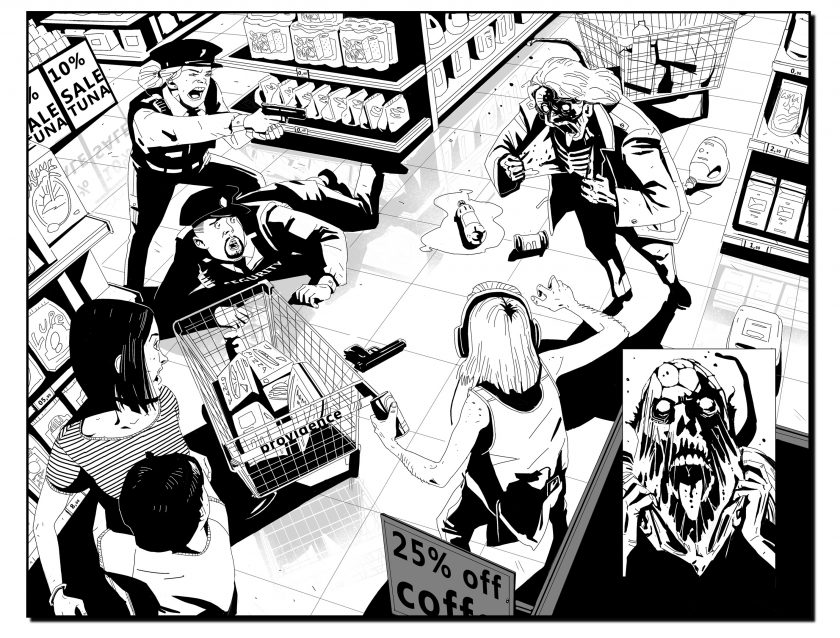 Me: This Kickstarter features three covers as well as nude variants. What can you tell us about how each cover reflects the story of The Broken Circle and the cover artist behind each one?

Dwonch: Heh, to be clear the “nude variants” are totally PG-rated; they are versions of our exclusive Kickstarter covers that just feature line art without logos or trade dress. Santi Guillen created the first two. We were going for two takes on the survival theme: one is a bit grim while the other is guns-a-blazing. For the third, I commissioned Dan Mendoza to make something that HE wanted to do. Dan is a good friend of mine, and we talked a bit about the story and how this was the day after prom, and he just let loose!

Dwonch: Both Prom of the Dead and The Broken Circle are my attempts to take the (at this point) very familiar zombie survival horror genre and do something new with it. It hits a lot of those familiar tropes you’d find in Romero and Kirkman’s work, celebrating them while challenging expectations as well. To be clear, this ISN’T a zombie story. It starts there, sure, but we’re headed to uncharted territory with The Broken Circle. It’s fun, funny, and heartbreaking; a coming-of-age story set in the last days of humanity that blends teen dramedy, horror, and sci-fi. I guess what I’m trying to say is it’s DIFFERENT, and that’s the reason you should try it. 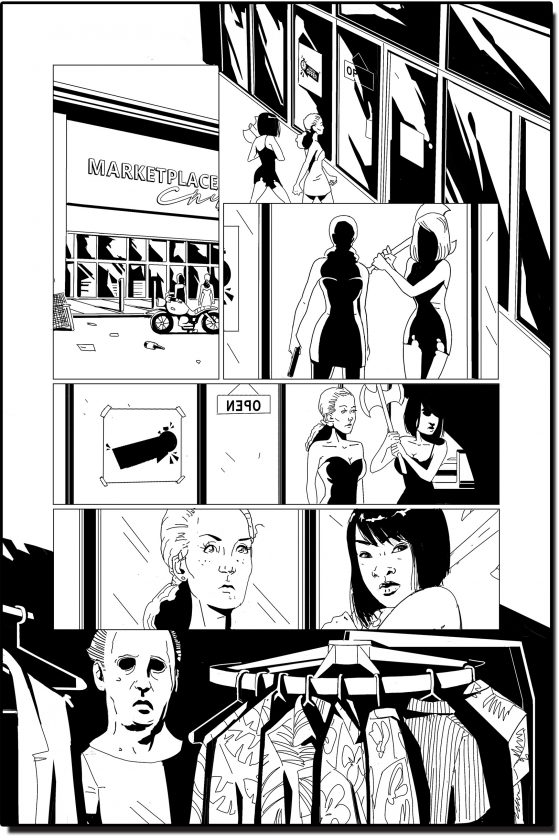 Dwonch: There are really only five stages of “success” in comics: writing a story, producing the story, having people read it, getting feedback (or having your work reflected back towards you), and ultimately making a living doing what you love. I’ve experienced all, well, MOST of those stages, but I think most people get caught up in the last stage. I would have quit a long time ago if I got caught up on that last stage. Ultimately, the first stage is the most important. You’ll never get to the other stages if you get caught up in “what might be.” Create something from the heart first, and the rest will follow.

Me: Promote yourself! Let us know what else you’re working on and how we can support you.

Dwonch: Oh, man! There’s a lot going on! On top of The Broken Circle, you can pre-order my next project (with co-writer Brockton McKinney, artist Magenta King, and colorists Megan Huang and DAM), Jenny Zero, from Dark Horse Comics this month! We also just wrapped Mind Palace earlier this month and have built a collected edition into the Broken Circle Kickstarter as a stretch goal. Hopefully, we’ll get funded so that we can send every print tier backer Mind Palace for free! I’m writing a ton of other projects that I can’t reveal just quite yet, but if you follow me @DaveDwonch on all the socials I’ll have announcements soon!

Me: Thanks for letting us experience part of your horror trilogy, Dave! Readers can explore the horror of Spores: The Broken Circle on the official Kickstarter page.

Listen to the brand-new “Kickstart the Week” podcast on Youtube!