Dynamite Comics has been on a roll with their crowdfunding campaigns, and their latest project, Bettie Page Uncovers the Mystery of Apocatequils Ring, has just hit Kickstarter with a new creative team taking over the franchise – writer Stephen Mooney and penciller Giorgia Sposito.

“Bettie has been many things – a model, a spy, a modern day lady of action. And in this new tale – Bettie Page In Apocatequil’s Ring – she joins a fellow archeologist to discover an ancient secret that could spell doom for the world! It’s one part Indiana Jones, one part Emma Peel, and 100 percent Bettie!  This original 40 page comic book adventure is a wonderful way to celebrate all things Bettie Page!”

Luckily, Comic Frontline had the chance to chat with writer, Stephen Mooney, about his upcoming project. We discuss why he wanted to explore Bettie Page’s character, his experience with crowdfunding campaigns, and if we can expect more Bettie Page content from him in the future.

Be sure to back up Bettie Page now: https://www.kickstarter.com/projects/dynamiteent/bettie-page-uncovers-the-mystery-of-apocatequils-ring

Stephen Mooney: It’s a bruiser! A two-fisted action-adventure yarn in the pulpy style of Indiana Jones and The Mummy (1999). Bettie is growing into her role as the CIA’s ‘obtainer of rare antiquities’ and enlists the aid of an unorthodox young archaeologist named Dakota Smith. Together the two must puzzle (and flirt!) their way through an ancient Incan temple to find the legendary treasure of the ancient King Apocatequil. 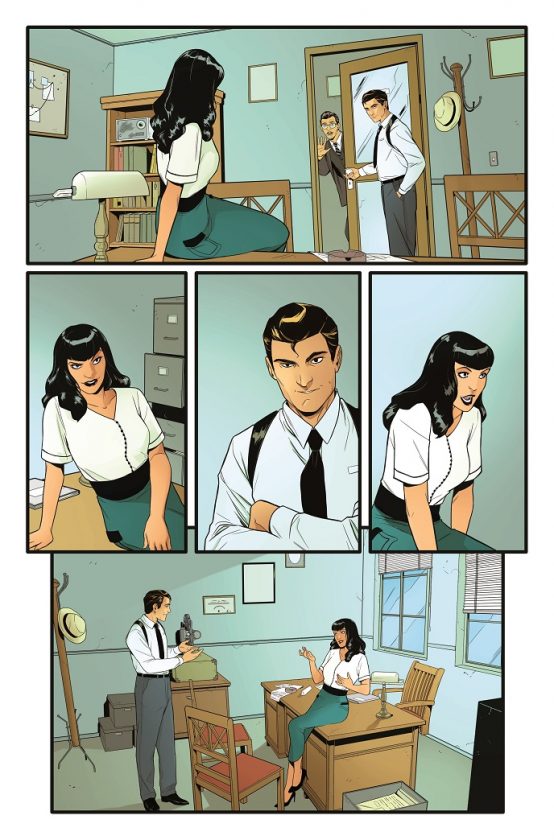 CF: You’ve done a Kickstarter before with Half Past Danger, what do you enjoy about the platform?

Mooney: I appreciate the direct conduit it offers to readers; the easy back and forth between creator and consumer. It offers a new kind of avenue, where more niche material can find a specific and hungry audience. It’s more personal.

CF: Why did you and Dynamite want to turn to Kickstarter for this Bettie Page project?

Mooney: I’ll have to leave that question to the Dynamite bigwigs – I’m just a gun for hire on this one!

CF: Did you read the past Bettie Page volumes before writing your own?

Mooney: Yep; read all of the previously published material and was a fan of what David Avallone did with the character previously. Especially when the wonderful Julius Ohta was on art duties. I was keen to inform myself on all that had come before in this version of Bettie’s life, but not to the point where it dictated where I myself had to go with her.

CF:  Were there any elements from those volumes you wanted to include?

Mooney: Absolutely! I adore the ‘Bettie as a freelance government agent, learning as she goes by the seat of her pants’ angle. Her natural aptitude and nous carrying her through some incredibly outlandish scenarios. Love Lyssa as her ace partner. The horror/spooky elements. These were all facets that were far too valuable to jettison, for my money.

CF: And how did you want to bring your own voice to the property?

Mooney: I just tried to play my natural game, as always. I find if I get too far into my own head, that I start to second-guess my writing and ideas. So, much like Bettie in some ways, I go with my gut and wing it in places initially. Once I get to the end of a draft where I’ve just trusted my instincts and, for lack of a better term, barreled through, I’ll go back and do another draft or two where I make sure everything is coherent and working logically. Tighten that puppy up. 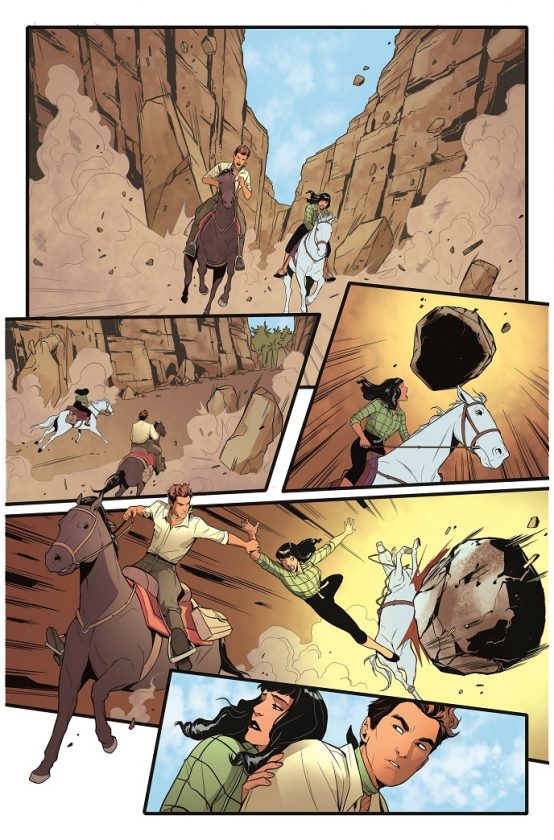 CF: What was your collaboration like with Giorgia and Pippa?

Mooney: It really was a genuine pleasure. Giorgia’s work is so playful and fun while being firmly mired in the fundamentals. Note-perfect storytelling and acting beats, all complimented by an effortless sense of style. It was always a thrill when her new pages would arrive every few days. Pippa then came in and applied her wonderful palette and technique to the whole thing; really enhancing what Giorgia had drawn while adding some new flavours all her own. I especially adore the sequence inside the incan temple, full of lovely, dangerous reds and oranges. Great stuff!

CF: What do you enjoy most about working on Bettie Page?

Mooney: I just love her as a character. Her motivations, her methods and her results. The snappy dialogue patterns are great fun to engage in. The time period is so wonderfully romantic and almost mythical in the way that you can manipulate it to play on those special nostalgic emotional beats. Bettie’s fashion sense and the general industrial design of the era. The way she lends herself so well to so many disparate and unique genres and storytelling styles. So much good stuff!

CF: Why do you think it was important to make this a one-shot instead of a mini or ongoing?

Mooney: For my part, I love a good one-and-done single issue tale. A good, satisfying chunk of story that doesn’t require much or any previous knowledge of the character or their world.

CF: Do you have plans on doing more?

Mooney: Oh, I have grand plans… as to what I’m allowed to divulge though, I don’t know! I can say that I’d love to write more stories with Bettie.

We are over 500 Backers, and around $250 away from reaching 10K! Thank you all for the wonderful last day for this campaign: https://www.kickstarter.com/projects/comicuno/the-dancer-1-a-psychological-martial-arts-thriller?ref=creator_nav