Comic Frontline: JG, what made you want to team up with Dynamite Comics in particular to fund such a personal project?

JG Jones: It sort of worked out organically. I had been looking at a lot of Sanjulien’s work, especially his Vampirella covers, and it inspired a little Vampi sketch in my sketchbook. Nick at Dynamite saw it, and asked if I’d be interested in painting it as a cover.

CF: What do you enjoy about drawing Vampirella? 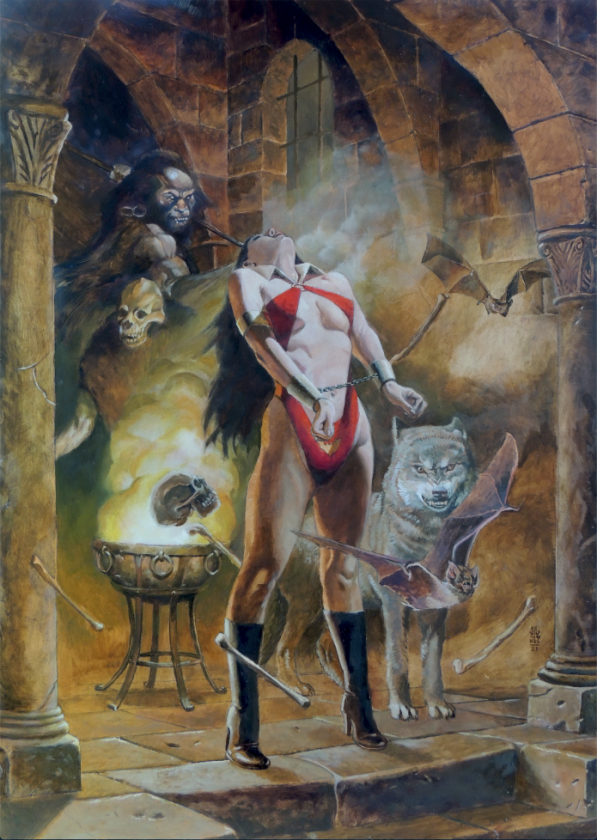 Jones: I have always love the beautiful artwork in the old Warren Publishing books, Eerie, Creepy, and Vampirella. Artist like José González, Rudy Nebres, José Ortiz, and a number of other fantastic artists worked on that book, and their work influenced my own. As for Vampirella herself, she is so much fun to draw or paint. She’s strong, sexy, and has a fierce character that makes her appealing to illustrate.

CF: Why do you think IndieGoGo was the perfect place for this project?

Jones: IndieGoGo seems to draw the interest of like minded people. People who love comics and comic art, fantasy, science fiction, horror, whatever the genre, there’s something for everybody on IndieGoGo.

CF: Would you like to use crowdfunding again for any future projects?

Jones: Well, let’s see how this campaign goes, then I’ll have a better answer for you. Hahaha!

CF: Would you like to work on more Vampirella?

Jones: I wouldn’t mind at all, but with the passing of the great Frank Thorne, I may want to do Red Sonja next.

CF: What other Dynamite comic characters would you like to work on?

CF: Are there plans to work on more projects connected to charity and polycythemia vera in particular? How do you think comic books can give awareness?

Jones: I have been working for the past year on a campaign called Voices Of MPN’s to shed more light on the suite of rare diseases called Myoproliferative Neoplasms. I have been fortunate to be able to speak with a number of other people with a number of these rare diseases and to present the interviews along with their painted portraits. I also support the work of Be The Match, with helps register and match potential donors with patients in need of a stem cell transplant.

CF: For fans of your previous work, what do you think they’ll enjoy about this comic?

Jones: I hope that they will not only enjoy my first oil painting in a while, but realize that I am back working full time and creating lots of new comics content. I’ve always been someone who likes to let the work do the talking, so it’s good to be back and having a conversation with readers and fans.

Go Back up Dynamite Comics and JG Jones’ IndieGoGo: https://www.indiegogo.com/projects/jg-jones-presents-vampirella#/