The anthology Classic Monsters Unleashed contains at least 25 scary stories from some of horror’s biggest names, including Joe Lansdale, Jonathan Maberry, Ramsey Campbell, and Lisa Morton. These stories feature classic icons such as Dracula, Frankenstein, and the Mummy in brand-new stories.

The book was put together and edited by James Aquilone, the writer of the Dead Jack novels, and published by Black Spot Books and Crystal Lake Publishing. The Kickstarter page boasts that the volume will have 80,000 words of fiction and over 300+ pages of stories and art from Frank Frazetta, Mister Sam Shearon, and cover artist Colton Worley with cover text designed by Shawn T. King.

The book blew past its $4,250 goal on Kickstarter and has already raised over $35,000. Backers can still get their pledges in before the campaign ends on April 7, 2021, at 8:05 PM EDT to unlock more stretch goals. Rewards include a digital ($10) copy of the book as well as a paperback ($30) and limited edition hardcover that will never be available again ($42). The rest of the rewards are available for ogling on the Kickstarter page here.

Me: You’ve mentioned in previous interviews that Classic Monsters Unleashed is a tribute as well as an update to old monster movies and books. How would you describe this as an update to the classics while still keeping in the spirit of the originals?

Aquilone: The Classic Monsters endure. They’re iconic and have stood the test of time. We can update them, bring them into the modern age, change their gender, or race, or whatever, but the heart and soul of the monster should still be there, what makes them classic shouldn’t change. Classic Monsters Unleashed is written and edited by people who love monsters and you’ll see that in this anthology.

Me: How did you go about assembling some of the best writers in the horror genre?

Aquilone: It was a pretty simple process. I made a list of my favorite authors and began emailing them. Almost all of them said yes. Just to name a few, we have Joe Lansdale, F. Paul Wilson, Jonathan Maberry, Ramsey Campbell, Seanan McGuire, Lisa Morton, and Tim Waggoner. I’ve also worked with many of the writers before as managing editor of Weird Tales magazine or I interviewed them for a media outlet.

Me: What can you tell us about the arrangement you made with the Frazetta Estate to use some of Frank Frazetta’s amazing monster art pieces in your anthology and which one is your favorite?

Aquilone: I had originally asked to license three images for the interior. But after Alessandro Manzetti, who’s an award-winning author and poet, joined the lineup, I had an idea to use Frazetta’s “Creatures of the Night” as a limited-edition print featuring a specially commissioned poem by Alessandro. The Frazetta Estate loved the idea and we’re now offering the exclusive piece through the Kickstarter campaign. Almost half of them are already gone, so it’s been very successful and I can’t wait to hang it up in my house.

And, of course, “Creatures of the Night,” which depicts Dracula and Frankenstein, is my favorite Frazetta work. I already own the T-shirt!

Me: There will be several other artists involved with the project as well – can you tell us a bit more about them and what we can expect from their haunting artwork?

Aquilone: Colton Worley, who’s done a bunch of comic book work for Dynamite Entertainment – including The Shadow and Green Hornet – illustrated our amazing cover and is doing several pieces for the interior. I’ve worked with Colton a few times on my Dead Jack series and he always kills it.

Sam Shearon has also done comic book work, most notably for IDW, as well as covers and merchandise for Slayer, Iron Maiden, KISS, and Rob Zombie. Sam is doing a few interiors, too, and has offered a really cool reward – portraits of Edgar Allan Poe, H.P. Lovecraft, and Aleister Crowley with special backs.

Shawn T. King, who has also worked on my Dead Jack series, did the text design on the cover and will be doing the interior design on the book itself – and we plan to pack the book with amazing art and incredible design work. It’s going to be a really gorgeous book.

Jeremiah Lambert, who also has a background in comics, has done a bunch of work for the Kickstarter campaign, including the T-shirt designs and creating the amazing video. He’ll also be doing commissions, drawing backers as their favorite monster.

And of course Frank Frazetta. We’ll have three of his pieces inside the book – Creatures of the Night, The Wolfman, and The Headless Horseman.

Me: Exclusive postcard prints will also be available of Edgar Allan Poe, H.P. Lovecraft, and Aleister Crowley. Out of the three, which one would you most want to spend the afternoon with and why?

Aquilone: Easy. Poe. I’ve been a huge Poe fan ever since I read the “Tell-Tale Heart” as a kid. I imagine we’d stroll around the city and talk about the macabre. Or go drinking in a cemetery or something.

Me: Out of all the classic monsters in your anthology, which one is your favorite and why?

Aquilone: I love them all, but I have a soft spot for Frankenstein. Maybe because my first exposure to the classic monsters was through Young Frankenstein, which is still one of my favorite movies, and I quote it probably every other day.

Me: What have been some of the most influential horror works in your writing and editing processes?

Aquilone: The Shining, which scarred me as a kid when I saw the movie and scared the crap out of me as an adult when I read the novel. Also zombie movies. Nothing terrified me more than zombies when I was younger, but gradually I came to appreciate them, and I now write a series of novels and short stories about a zombie detective named Dead Jack. So I turned my fears into my art.

Me: What advice would you give to people interested in creating an anthology?

Aquilone: It’s a lot more work than you think. It’s more than editing. You’ll be dealing with writers and artists and contracts and publishers and probably a ton of problems. But at the end of the day, it’s also a lot of fun and a great experience.

Me: You’ve blasted past your goal on Kickstarter. What would you say are the top three things that helped your campaign get so much traction?

Aquilone: I did a ton of pre-launch promotion. I carefully planned out a six-week marketing campaign leading up to the launch, with the intent to get as many people as possible to sign up for the email alert on the Kickstarter preview page. I got almost 500 and it paid off on opening day. The campaign raised more than $14,000 in its first 24 hours. It’s key to have a big opening. Otherwise, you’re going to struggle. It surpassed $30,000 in the first two weeks and is still going strong.

Plus, having nearly 20 amazing, award-winning writers in your Table of Contents doesn’t hurt. Oh, and Frank Frazetta. And also Dracula, Frankenstein’s Monster, The Invisible Man, and The Headless Horseman. How could we miss?

Me: Promote yourself! Let us know what else you’re working on and what else we can expect from you in the future.

Aquilone: The third book in my fantasy-horror series, Dead Jack and the Old Gods, comes out in July. I also may be putting out two graphic novels in the coming months. And I’m sure there will be plenty more anthologies in the future. Now I’ll return to my crypt where I’ll be refreshing my Kickstarter campaign page in the hopes of ensnaring more innocent backers. Hehehe…

Me: While James cackles away, check out his Kickstarter campaign here for more spooktacular information! 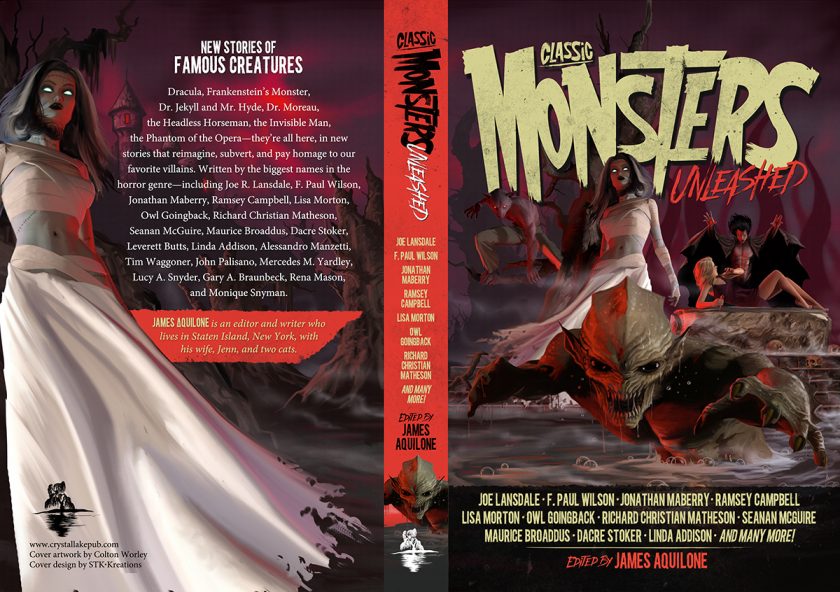