The adult horror graphic novel LET ME OUT features a cast of LGBT+ characters created by a marginalized creative team who want to pay tribute to queer cinema and vintage revenge fantasy flicks. Learn more about the project from the creator and writer of LET ME OUT, Emmett Nahil.

LET ME OUT is a 185+ page fully colored graphic novel that plays with horror tropes, subverting readers’ expectations. The story takes place in Columbiana, NJ, during the 1979 “Satanic Pani.” A pastor’s wife winds up dead and the convenient scapegoats are four friends, our protagonists Mitch, Terri, Jackson, and Lupe. Using the supernatural, the group finds themselves up against a satanic conspiracy that involves the government and blood rituals. As a friendly content warning for readers, this story does have blood, gore, violence, torture, and mentions of the period-typical transphobia and misgendering, so please keep that in mind before reading! Readers can also check out the first ten pages of the comic. 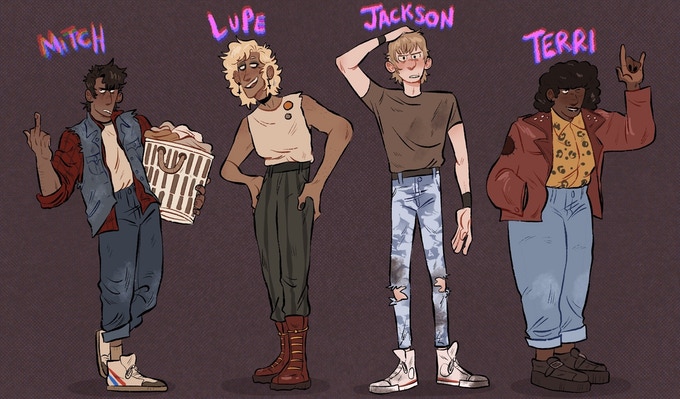 The story is written by Emmett Nahil, who is also the Narrative Director and co-founder of the game studio Perfect Garbage. According to his bio on Kickstarter: “As a mixed Arab-American of trans experience, he wants to bring fun, flawed, and interesting characters of all kinds to genre works.” The artist for the story is George Williams, a transman whose work includes the upcoming comic Croc and Roll. His preferred focus in a lot of his work is queerness and found families.

I spoke in-depth with Emmett Nahil about the project below:

Me: Your Kickstarter mentions that LET ME OUT is a “tribute to queer cinema and vintage revenge fantasy flicks”. What are a few of these films that were most inspirational to your graphic novel and why?

Nahil: I was inspired in different ways by Last House on the Left, Mandy, Ginger Snaps, Lost Boys, and Ready or Not. I think my personal inclinations are towards horror that focuses on underdogs going up against seemingly unstoppable evil. Although, in this comic, I found it more interesting to ask: What if the actual demonic monster in the story wasn’t even the big unstoppable evil that our underdog protagonists had to go up against? To me, law enforcement and government power running unimpeded are a lot scarier than fantasy monsters.

Me: How would you describe the relationship between the LGBT+ community and the horror genre?

Nahil: I would say that the relationship is an interesting one! LGBTIA folks are obviously not really thought of very often when folks imagine what the typical horror fan looks like, but I can say for certain that there’s a vast and thriving audience of scholarly and casual fans of horror who also happen to be non-cis and/or non-heterosexual.

On the other hand, I do think there’s a natural through-line there between how queer coded characters (and even textually queer people in horror) have been traditionally depicted as monstrous and what queer creators have decided to explore with their own work in horror. We’re both reacting to the movies, books, and comics we love while also changing and reshaping them in ways that are more interesting and relevant to us. Queers love monsters; it’s just a fact. 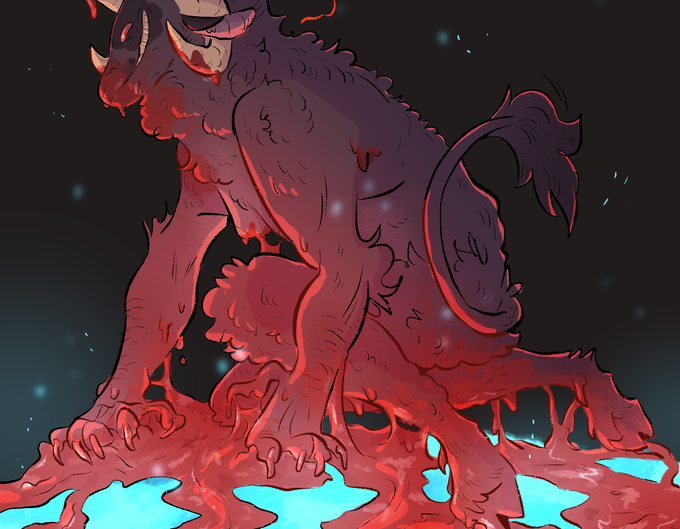 Me: Can you talk about the significance of setting your graphic novel in 1979 during the “Satanic Panic”?

Nahil: As a lot of folks have been pointing out, we are going through a time period very similar to the early 80s right now—there’s a heavy swing towards conservatism, a pandemic running rampant, and there’s a lot of moral panic going on that is being perpetuated by everyday people and exacerbated by people in power. I felt that the story of queers bashing back could be told through the lens of that time period as a way of underscoring those similarities. It underscores how history is built in cycles, and we’re still fighting a lot of the same regressive mentality we were fighting in that time period.

Me: If you only had one sentence to use for each of them, how would you describe your main characters Mitch, Terri, Jackson, and Lupe?

Nahil: Ooh, that’s a good one! Mitch is fighty, felonious, and fun-loving. Terri’s a rock-star-in-waiting who’s ready to get to the big gig. Jackson is a knucklehead weenie with a heart of gold. Lupe is a gentle soul who’s done putting up with bullshit.

Me: Who is part of your creative team, how did you go about finding them, and why were they perfect to be part of the LET ME OUT crew?

Nahil: LET ME OUT is drawn by George Williams, who is the artist, designer, and all-around talent in the team, and I found him through an open call on Twitter after posting a short pitch. His style was perfect for it, and he really got the ethos of what the comic could and should be. It’s been a dream working with him! If we are funded, I really hope to be able to hire an editor and some sensitivity readers to help refine the script, too.

Me: When talking about why you chose Kickstarter for LET ME OUT, you mentioned that there was pushback from publishers regarding “horror by and about trans and queer folks”. Where do you think that pushback comes from and do you foresee a future where publishers will become more open to publishing these ideas?

Nahil: I think it’s a couple of things! Partially it’s the idea that LGBTQIA genre stories are niche or difficult to sell to a general audience, or that horror fans are inherently cagey about representation. I also just think it comes from a lack of imagination—it’s the thought that having a diverse cast in a genre like horror “ruins the illusion” somehow or takes away the fun from writing a really off-the-wall adult horror story, which is obviously not true. I do see a future when that kind of gatekeeping will become less prevalent, I just am not sure when it will happen! Hopefully soon.

Me: What is the number one reason why people should pledge money to your campaign?

Nahil: Because we’re two trans dudes making horror, and that is an extremely rare thing, even in the indie space! We both have been preparing and working on this project for two years now, and we’ve poured our hearts and souls into it. Also, because LET ME OUT is a really wild story, and we can promise some blood, guts, and action for readers.

Nahil: Be a good collaborator before you are anything else. Writing for comics is a collective effort between many different people, and if you can work well with artists and editors, you will get way farther in your career by having both a hard-working attitude AND a willingness to be flexible with your writing. Those collaborations will be endlessly rewarding for you creatively, too!

Me: Promote yourself! Let us know what else you’re working on and what else we can expect from you in the future.

Nahil: Well, I’m a horror, sci-fi, and fantasy writer, and a full-time narrative director with Perfect Garbage, an indie game studio. We have a game coming out this fall called Love Shore, which you can wishlist on Steam! I’m most active on Twitter, and you can find me @_emnays.

Me: Thanks for taking the time to let me into your world of LET ME OUT! If you’re reading this and interested in learning more about the graphic novel, check out the official Kickstarter page.