Who’s Not Hare is a graphic novel that introduces kids to friendly cryptids. Jonathan Rosenbaum is the creator who worked on every aspect of the book, from writing to artwork to colors and letters. He spoke in-depth about the inspirations behind his unique project and what cryptid he’d want to spend the day with and why!

A complete graphic novel just under 70 pages, Who’s Not Hare introduces the lonely cryptid of Knot Hare. He just wants to be discovered, and with the help of famous cryptids like Bigfoot, Mothman, and the Loch Ness monster, he may finally get the recognition he’s been looking for!

Jonathan took us on his journey with Knot Hare in-depth below!

Me: What inspired you to have a children’s graphic novel featuring Cryptids?

Rosenbaum: I had been attending a lot of horror conventions because I had some creepy cute art and I have two other children’s books in the genre: The ZomB and the VampR, which is the same premise as The Tortoise and The Hare except with a zombie and a vampire; and The Adorable Beastling, which is like The Ugly Duckling except in reverse. While at the shows I loved seeing artwork of cryptids of different sorts. I wanted to come up with my own cryptid. I loved making something that is scary and taking it from their perspective. I don’t know how, but I came up with the Knot Hare. I love plays on words and Knot Hare (not here) was the perfect fit.

Me: Which cryptids are featured in Who’s Knot Hare and why did you pick those particular creatures?

Rosenbaum: I wanted three to five cryptids in this journey story. Since it was going to be a graphic novel, I figured five would be best. I ended up with Bigfoot, Chupacabra, Mothgirl, the Jersey Devil, and the Loch Ness Monster.

I had to start with a classic like Bigfoot. Almost everyone knows him. Chupacabra is relatively new and a bit obscure, but kids love finding nuggets of things they didn’t know about. The Mothman is a bit of a classic and I wanted to add him. I wanted to include a female character, and I thought this was a perfect one to switch, especially since man was in the title.

The Jersey Devil is another that is a bit on the folklore side. Along with my theme of looking from the monster’s point of view, he’s not a devil, it’s what people call him. He’s just a Jersey guy. I had to end the last one on a classic, the Loch Ness Monster. The other twist is that the other cryptids are within the United States and I wanted the last to be a surprise. 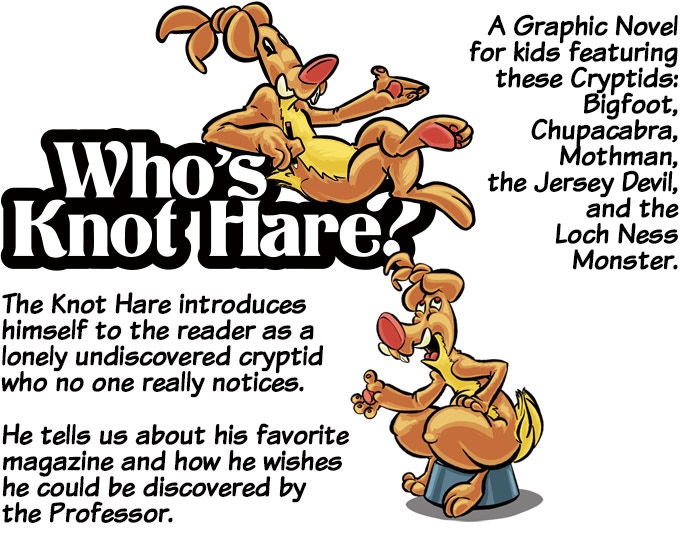 Me: If you had to pick one cryptid to hang out with for a day, who would you pick and why?

Rosenbaum: Honestly, it would be Bigfoot. In my mind, I think they could be around. Maybe they are a hominid, you know, a cousin to the homosapiens. That stuff fascinates me and I could imagine a group of creatures like this that have learned to hide from us, so maybe they are out there.

Me: The graphic novel will emulate a magazine format. Can you tell us more about the significance of this chosen style?

Rosenbaum: As the Knot Hare is introduced, he mentions his favorite magazine and he breaks the fourth wall talking to the audience. He interacts with the magazine, so I figured I would make the format a little larger than a traditional graphic novel. Plus it’s not too long, so it would feel more magazine-like as the reader holds it.

Me: You have several other children’s graphic novels of yours available through your campaign as well. Can you give us a brief rundown of what each of these books is about? 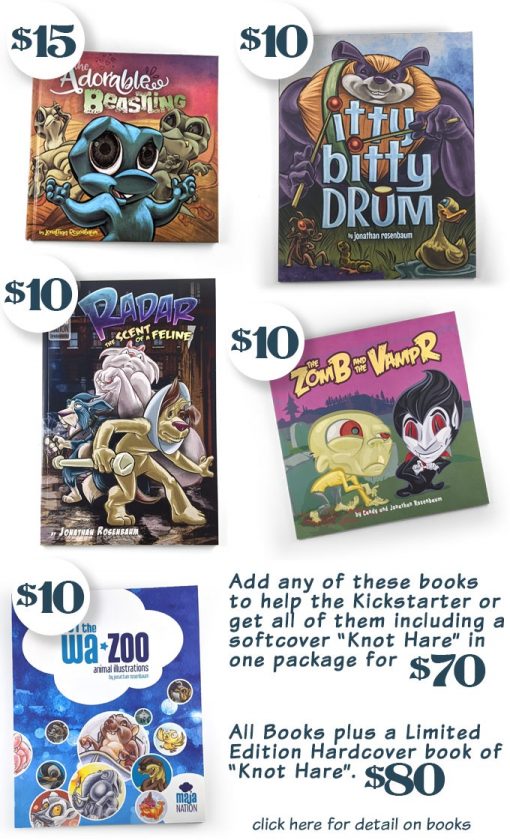 Rosenbaum: Radar, the Scent of a Feline: My first book and graphic novel is about a dog detective that has a cone around him. He wears it because he is obsessed with his tail and out of sight means out of mind. All of the cats in Kenneltown have gone missing, and he’s on the case.

The ZomB and the VampR: This children’s book was written with my wife as we discussed how Zombies are slow and Vampires are fast. My wife started writing and I worked it a bit as well basing it off the fable, The Tortoise and the Hare. I ended up writing the title like that because social media is the Vampire’s undoing.

The Adorable Beastling: I wanted to do a follow-up as a nocturnal fable for a children’s book. I ended up twisting the ugly duckling by taking creatures who are mean and scare for food and one oddball that just can’t and is too cute. But just like the ugly duckling, this oddball isn’t one of them, and we find out that she can be who she is and fearsome in her own way.

Itty Bitty Drum: This is the first children’s book I’ve written, but one of my more recent books. It’s a rhythm and rhyming book that takes the character on a journey and back. It is meant for younger readers. 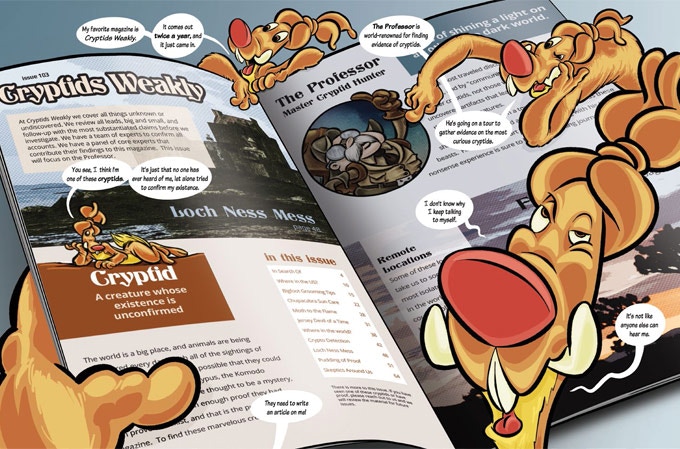 Me: What are some of the main lessons you’d like children to take away from Who’s Knot Hare?

Rosenbaum: It’s a story about fame or what really matters when it comes to who knows you. This story is for kids from 7-12 who are starting to relate to popularity and being seen. Kids often feel invisible and it’s not about everyone knowing you, it’s about the genuine people that can really see you.

Me: What is the number one reason why someone should pledge money to your campaign?

Rosenbaum: They will be helping me to bring this story to life, and they’ll be the first to have the book. Kickstarter will enable me to add premium features to this book that may not be in future editions if it ever gets a wider release. 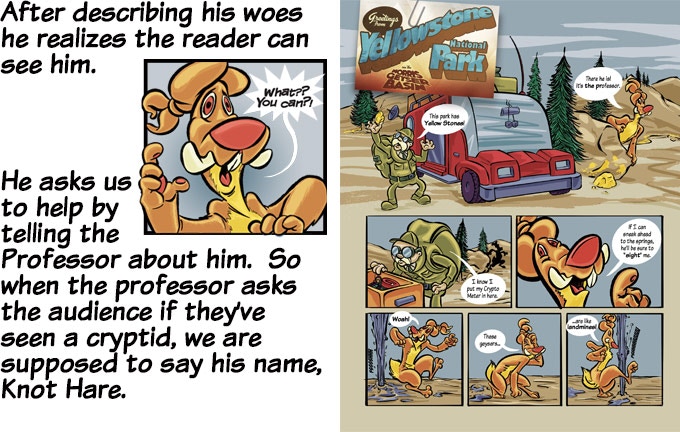 Me: What inspirational words do you have for aspiring children’s book writers and artists?

Rosenbaum: Don’t talk down to the reader. Kids are smarter than we give them credit for. But also work on being concise, think in terms of action and emotion, and let the art show the story. Also, when it comes to the subject matter, use your imagination. They sure do.

Me: Thank you for taking the time to turn the typically scary monsters into fun children’s material, Jonathan, and giving us a peek into your world. Readers can check out the official Kickstarter for Who’s Knot Hare. 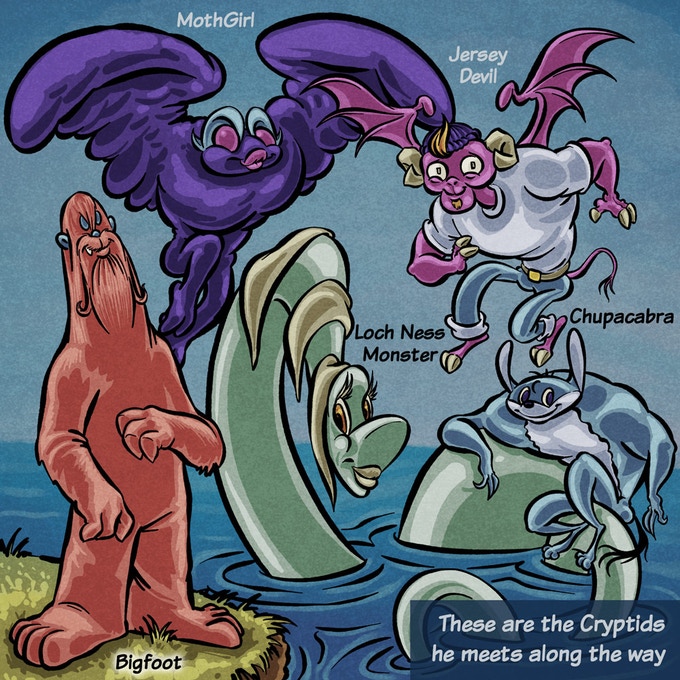 LET ME OUT – A Queer Horror Graphic Novel