Dynamite Comics launches a new Kickstarter starring Elvira and this time she hits Comic Con with Elvira: The Wrath of Con. David Avallone and Dave Acosta return to the series to deliver the special one-shot.

Luckily, Comic Frontline had the chance to chat with writer, David Avallone, about the book. We discuss why he wanted to return to Elvira, his own comic con experiences, and he even teases future Kickstarters with Elvira and a brand new project with frequent collaborator and creator of TMNT, Kevin Eastman. 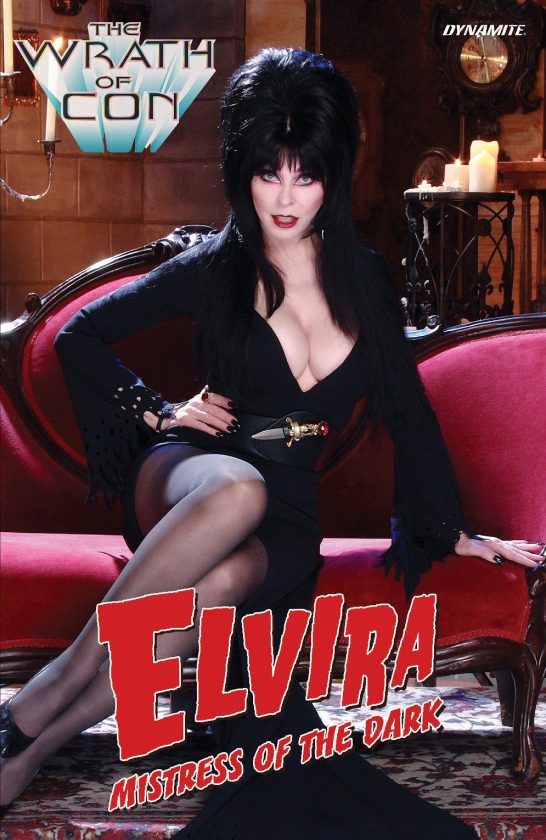 Comic Frontline: David, what made you want to return to Elvira?

David Avallone: That’s an easy one: I love writing her, I love working with Cassandra Peterson (Elvira Herself), and Dynamite has always given me so much creative freedom, even on licensed projects like this. Cherry on the top: Dave Acosta was available, as were Taylor Esposito and Walter Pereyra, so we got the whole gang back together for this one. They’re a great bunch, and we’re a well-oiled machine at this point.

Frontline: How did the idea for a comic con focused issue come about?

Avallone: My memory is on this is unclear, but I’m pretty sure it didn’t come from me. It was either Nicky at Dynamite or it was Cassandra or some combo of the two. Particularly when we realized there would be no SDCC two summers in a row, it seemed like a really great idea to start to fill that gap with our humble comic book.

Avallone: It’s been the biggest and the most spectacular con for years. I don’t even want to say how long ago my first SDCC was… but even then, before it became the pop culture phenomenon it is today… you could tell it was still something special. I had been to sci-fi/Star Trek cons when I lived back east, but when I moved to Los Angeles, and SDCC was suddenly just down the road a piece, I decided to check it out. I’ve been going back almost every year since.

Frontline: What’s been your favorite experience from Comic Con?

Avallone: There have been so many. Here’s a few. I apologize if they get a little name-droppy.

For something like a dozen years my wife produced a sci-fi burlesque show during the con, called Supernova A-Go-Go and those were amazing times… though I do remember one year I realized that if the show was unsuccessful we couldn’t pay our hotel bill. Some new grey hairs that year.

I remember James Urbaniak and I driving my wife crazy with our dueling Patrick Warburton impressions for a whole day… and then later at dinner, a man on the other side of the room was chucking lemon wedges at me and James. We went over to confront the guy and it was… Warburton. He was wearing glasses and I hadn’t recognized him, thus proving the Clark Kent thing totally works.

In 2017, I had my first panel at SDCC as a co-creator of an original series, with Kevin Eastman. Heading to that panel I just remember feeling that I’d passed through a gate into a new part of my life. I wasn’t wrong about that.

I used to do BTS for the first season of WYNONNA EARP, as camera and editor, and got to know some of the cast. All lovely people. I was clean-shaven at the time. In 2018, with my new mustache, I was at SDCC thumbing through some back issues when a voice behind me drawled “You call that a mustache?” I turned around to see Tim Rozon, owner and operator of the fantastic Doc Holliday mustache, grinning at me. 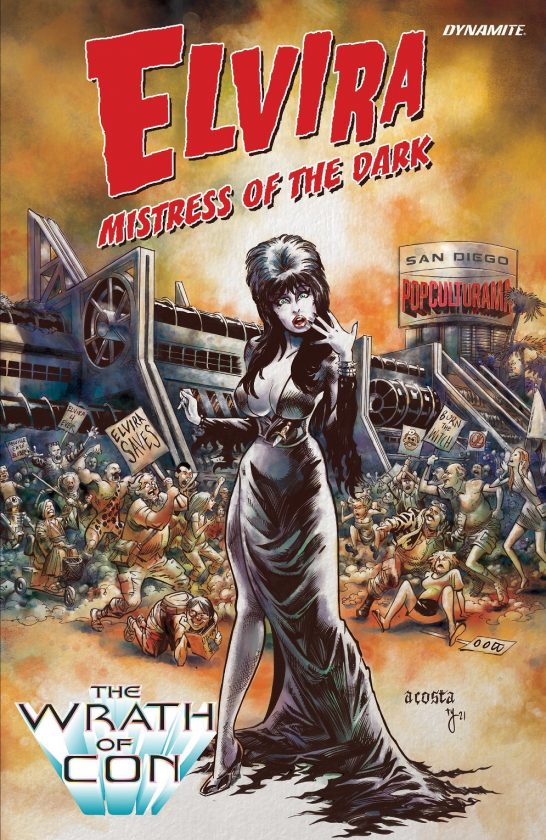 Frontline: Did you take any those experience to influence the stories in this book?

Avallone: Not those specific stories, but the overall book is totally informed by every experience I’ve had there, going back almost (gulp) three decades. At this point, I’ve seen it all, as far as cons are concerned…

Frontline: What can you tease about Elvira’s adventure at the event?

Avallone: All the people in this business I look up to have a genuine love of the fans. They know (as I do) that without the readers, the viewers, the enthusiasts… we’re nowhere. This comic celebrates those fans… while also acknowledging there’s a thin line between love and hate. The difference between a fan club and a cult is in the hands of its leader. Is that cryptic enough?

Frontline: Do you have plans for more Elvira one-shots?

Avallone: Yes! There’s one more we haven’t announced yet that I’m writing, and that we have a fantastic artist on board for. It’ll probably go live sometime in the fall, but I have no control over that. And beyond the next one… who knows?

Frontline: Do you have plans for more Kickstarter projects with Dynamite or creator owned work?

Avallone: The one shot I mentioned above will likely be a Kickstarter. Beyond that… Kevin Eastman and I are cooking up something brand new that may begin with a Kickstarter, but that’s still a ways off yet. We have to wrap up DRAWING BLOOD volume two and the not-yet-begun volume three first…

Frontline: What are you most looking forward to when returning to cons as a fan and a creator?

Avallone: Seeing friends and fans and colleagues. It’s the human element that you miss the most. Some of my comics friends are people I met at cons, and some I only ever get to see or spend time with at cons, and that time is absolutely golden. I can’t wait to get back. Con organizers, this is your cue to invite me!