The 19th-century spin-off prequel series Snow Paw is now on Kickstarter as part of the Lone Wolf Comics universe. I’m chatting with creator/writer Robert A. Multari about this fantastical, supernatural universe he’s created, which is populated by a variety of fantasy creatures like werebeasts and brownies. The series is promoted as being perfect for fans of Disney’s Brave and Penny Dreadful with an empowering female protagonist.

Cirilla (Cirray) MacKinlay is Snow Paw, a farmgirl who discovers she has a Pureblood Monoki werewolf lineage. Now aware that she’s living in a world brimming with supernatural creatures, she sets off with fellow Pureblood Monoki Silver Mane to figure out where she belongs in the world. One thing’s certain: she must learn to control her lycanthropy in the battle against the Dark Covenant of the European region.

The creator and writer, Robert A. Multari, sets Snow Paw in the same universe he established in his Night Wolf series, of which he self-published five issues (so far). He’s joined by Mog Park as the illustrator, who has previously worked on history and lore illustrations for Game of Thrones. Her work in comics includes cover art for Penny for Your Soul and Samurai Oz. The colorist on the team, Bruna Costa, works on horror and fantasy series, and the letterer is Dave Lentz (Cult of Dracula, Unicorn Vampire Hunter).

The Kickstarter has already hit its $10,000 and will continue to run until November 3, 2021, ending at 11:59 PM EDT. Rewards start with digital ($5) and print ($15) copies of Snow Paw #1. There are also a variety of variant covers available from artists Katherine Lobo ($20), Kyle Roberts ($25), Carlos Herrera ($30), Chris Williams ($35), and Ludovic Salle ($40). All the covers are available in metal as well at higher reward tier levels! And if you’re looking to catch up on the Lone Wolf Comics universe, the $21 tier also includes digital copies of Night Wolf Volume 1 and Night Wolf #5. The complete list of rewards offered is available on the official Kickstarter campaign page.

To become part of the wolf pack, I interview creator and writer Robert A. Multari to talk about Snow Paw’s impact on the Lone Wolf Comics universe as well as how his supernatural world is unique.

Me: Serving as a spinoff story from your Night Wolf series, how does Snow Paw differ from that comic?

Robert A. Multari: Night Wolf is more of a supernatural/horror/action series that takes place in the modern-day present and focuses on a teenage boy in high school whose life gets thrown into a blender upon discovering his werewolf lineage. Snow Paw takes Night Wolf under her wing, or paw rather, as a mentor and trains him how to be a werewolf and fight against a malevolent group of supernatural creatures led by a master vampire.

Snow Paw is more of a fantasy/supernatural/action series where we are taken back to the 19th-century Scottish Highlands focusing on a fierce heroine with an adventurous spirit who often ignores the social expectations of her time. There is also an interactive element to this series. Throughout the story, there are hidden creatures in the scenes as easter eggs representing fantasy or supernatural creatures from the local lore. This also establishes that these beings live among mankind who are oblivious to their existence. 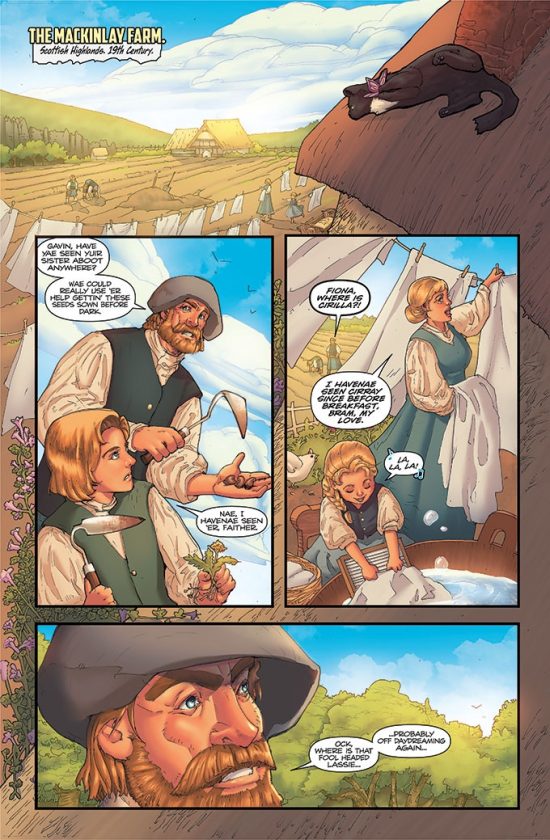 Me: How much do people need to know about Night Wolf to dive into the story of Snow Paw?

Multari: Nothing, they can pick up Snow Paw without reading Night Wolf and can enjoy it just fine. Snow Paw is a completely standalone series where we watch as she develops over a 200-year span into who she is in Night Wolf. The only common thing between the two series is the mythology that I have created for my world which is being explored and expanded upon in Snow Paw.

Me: What is it about werewolves that make you want to devote multiple stories to them?

Multari: Growing up I’ve always been a fan of werewolf stories. Plus, wolves are my favorite animals, so my attention would gravitate towards wolves and werewolves whenever they were present in a story. However, I always felt that comics, movies, and TV shows always got them wrong aesthetically. I also like the idea of werewolves being a more natural creature born with the ability to change at will and keep their mental faculties. As an avid comic collector, I wanted to see a comic with that type of character but never could find one that fit the bill, so I decided to do one myself. 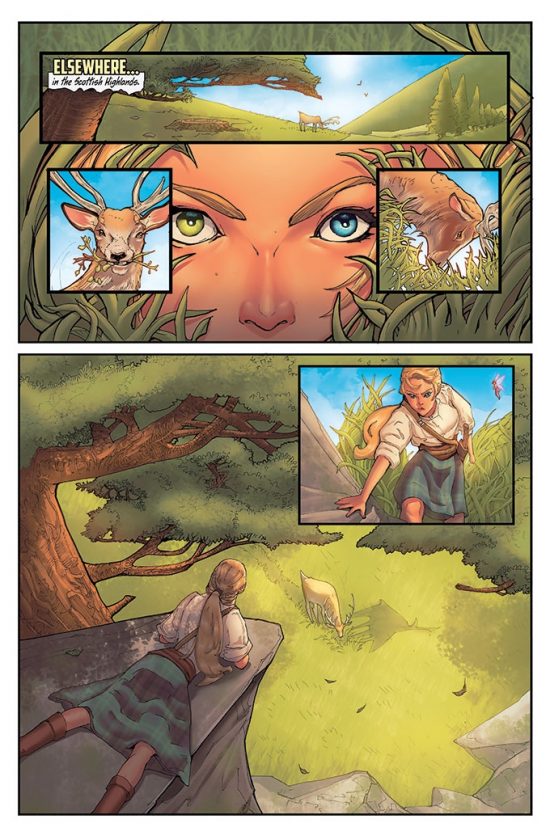 Me: How would you say your take on lycanthropy differs from other werewolf stories?

Multari: In my series, werebeasts are creatures that can take the form of an animal or take the form of a human. There are many different species of werebeasts. The most common are the lycanthropes, better known as werewolves. These races of magical creatures have been around since before written history. They produce offspring like most mortal creatures, but they have a long life span. They live hidden all over the world, each with a unique culture, most worshipping nature and their pagan gods known as the Mythic Celestials.

Me: What are some of the other types of fantasy creatures we can expect to see in Snow Paw?

Multari: In the first issue of Snow Paw there are Fairies, Brownies, a Cait Sith, a Cu Sith, and a Boobrie hidden in different scenes. In the next issue, we will meet Elves, Dwarves, a demon known as a Nuckelavee, and more. 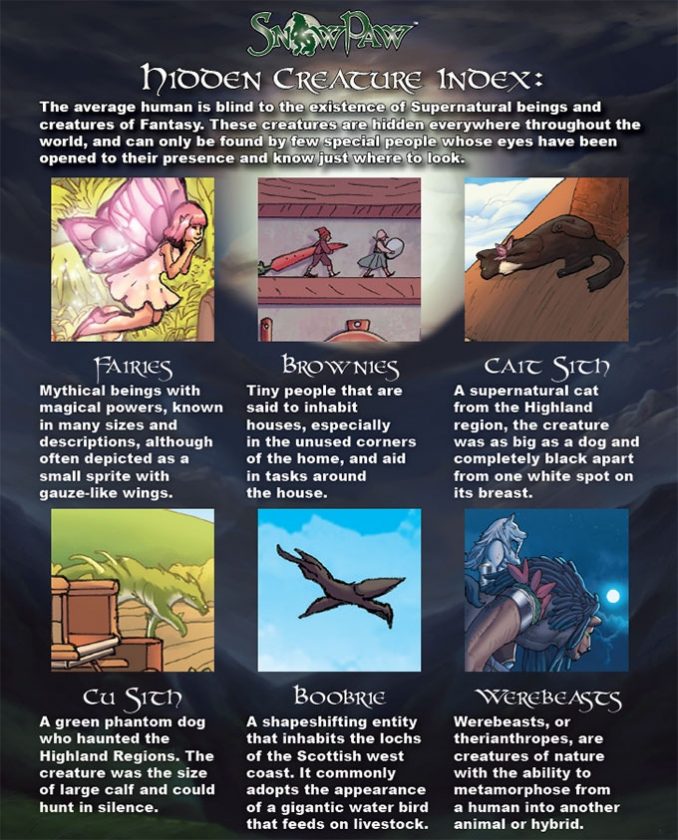 Me: You mention in your campaign that Snow Paw is your personal favorite character. Why her?

Multari: I’m a big fan of Irish and Scottish accents, even in a written form, which is heavily influenced by Chris Claremont’s run on the X-titles through Marvel Comics. Wolfsbane was one of my favorite X-Men characters, but I thought she needed to be less timid and could really become a badass chick. When I was developing Snow Paw as a character, I took what I liked about Wolfsbane and made her everything I wanted her to be, as a strong leading lady like Wonder Woman or Selene from Underworld. Even though she started as a supporting character in Night Wolf, as the series goes on, she really starts to overshadow Night Wolf because she is so dynamic and interesting and I may have done that unintentionally as I was writing the script. 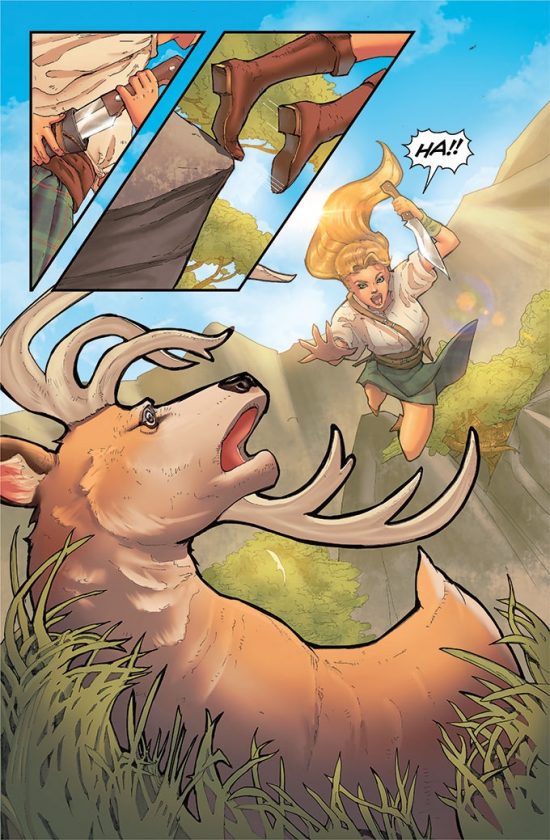 Me: What inspired you to use the setting of the Scottish Highlands during the 19th century for this fantasy story and how will it play a role in the story?

Multari: It really all stemmed from the backstory that I gave her in Night Wolf, so I had to expand on that and make it real. It’s like how Rogue One was spawned from a single sentence during the mission briefing in Star Wars: Episode IV and then became its own movie. There are a few conversations between Night Wolf and Snow Paw about who she is, where she came from, and how she got her tribal name. For this series, I did a lot of research about the Scottish Highlands during the 19th century to make the story fit within the time period. Another thing that drew me into using Erchless castle near Inverness was my Scottish heritage. I’m a wee bit Scottish on my mother’s side and our ancestors, the Chisholm clan, were the lords of the castle at the time. It was fun to learn a bit of Scottish history and about my heritage. 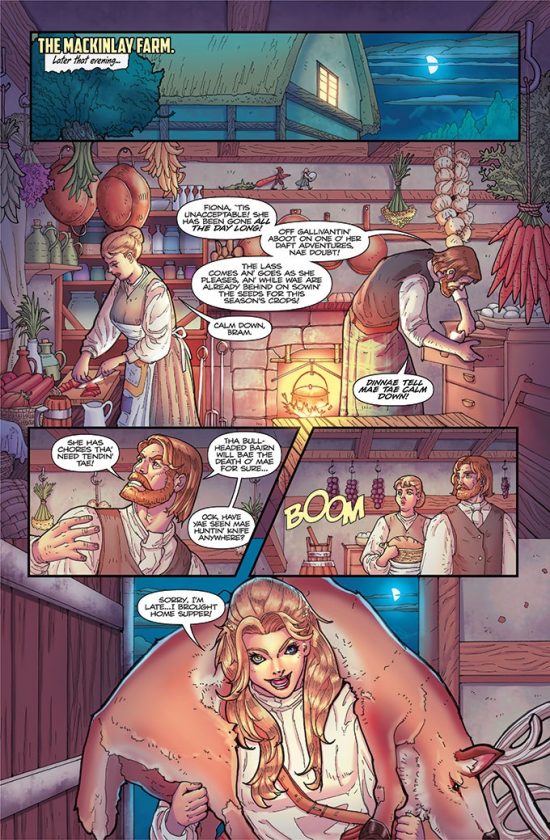 Me: What inspirational words would you have for aspiring comic book writers?

Multari: Write what you want and not what is hot now. Don’t skimp on the art. Find talented artists who fit your vision of the story. If you enjoy your own books as a fan and are passionate about them, then that will resonate with your audience. 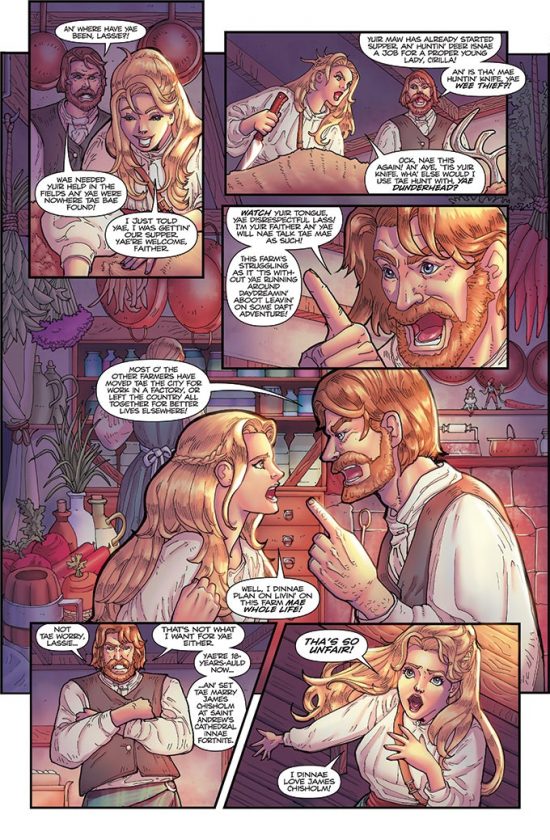 Me: Promote yourself! What projects do you have coming out soon that we can also look forward to?

Multari: After the Snow Paw campaign is fulfilled, I will be launching another Kickstarter for Night Wolf #6 in the spring. Then I plan to continue rotating launches because of the two series until I can make this comic book thing a full-time gig to start working on other titles that I have in the works.

Me: Thank you for lending a paw and telling us more about Snow Paw! Readers can check out the first issue on Kickstarter and join the wolf pack now! 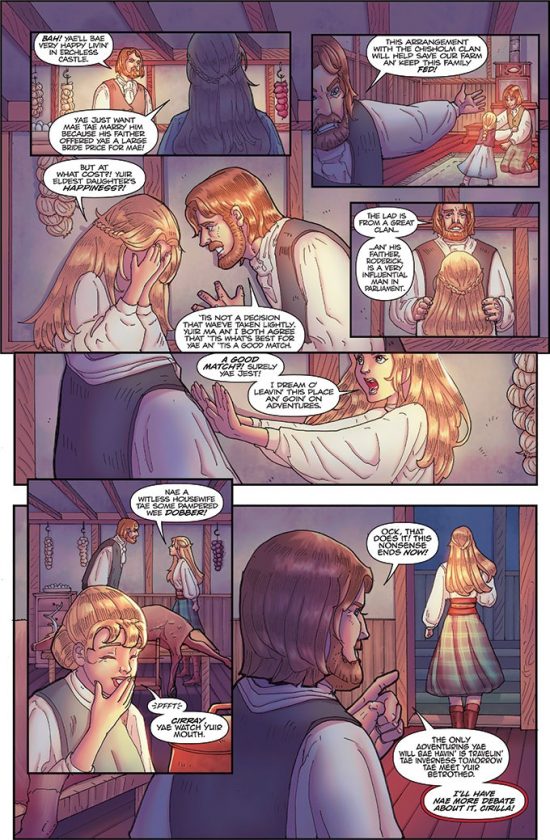