Exploring life after a monster apocalypse with the beginning of Anthony Ruttgaizer’s ongoing series, Chance For Survival. The first issue is now available on Kickstarter and I spoke with Anthony about his inspiration behind the series.

In the aftermath of a monster apocalypse, readers meet Chance Beckett, a small-town sheriff that’s trying to build itself back up. Monsters still exist outside their walls, and within them, survivors are fighting amongst themselves. The first issue includes a 26-page story filled with drama, sex, greed, murder, and more.

Anthony Ruttgaizer, the creator and writer of Chance For Survival, was nominated for a Glyph and Shuster Award for his graphic novel Heroes of Homeroom C. The penciler and inker for the series is newcomer Erik Tamayo with his artwork complimented Fred C. Stresing’s (Rick & Morty, Invader Zim) colors and letters.

I spoke in-depth with Anthony Ruttgaizer about his Chance For Survival project.

Me: Who is Chance Beckett and why is she a protagonist readers will root for?

Anthony Ruttgaizer: Chance Beckett is the female sheriff protecting a small settlement of survivors after a worldwide monster apocalypse. I think she’s tough, smart, sexy, and still just flawed enough to be human. She’s dealing with her trauma as well or as poorly as anyone else… with booze and sex. But her cause is just: protect her little pocket of humanity and help them create a new life out of the ashes of the old.

Me: You mention Chance For Survival is inspired by movies like The Quick and the Dead, The Postman, and Tremors. What is it about each of these movies that you drew inspiration from for this series?

Ruttgaizer: I want Chance For Survival to be unique in how it arranges its players and set pieces but there are definitely shades of other stories, other archetypes present. The influences go beyond that handful of movies. Chance is heavily influenced by Rio Bravo’s Sheriff John T Chance (played by John Wayne). The tough, no-nonsense sheriff with a steady hand who fights to the last to protect his town and wants his love life kept out of the public eye. That’s influenced by Sharon Stone’s Ellen in The Quick and the Dead, driven by her past and hell-bent for leather.

The Postman is about people rebuilding a society post-apocalypse and what of that former life represents a positive in the new world. And Tremors is about a modern frontier town fighting against monsters. The book is also influenced in small ways by comics like American Flagg! and The Walking Dead. I don’t want Chance For Survival to actually BE any of those other properties, but I like that little aspects of all of them have influenced what we’re creating here.

Me: What can you tell us about the monsters that inhabit this world and the best way to handle them?

Ruttgaizer: I’ve been describing the monsters to people as “school bus-sized kaiju,” which would probably be the size of the largest ones. And the best way to handle them is to shoot first and pray your aim is true.

Me: Your creative team includes newcomer Erik Tamayo and colorist Fred C Stresing (Rick & Morty, Invader Zim). How did you decide they were the perfect art team to bring to life Chance For Survival?

Ruttgaizer: Erik came to me via Carlos Granda, my artist on Heroes of Homeroom C. Erik is a member of Carlos’ artist collective in Medellin, Colombia. Carlos showed me Erik’s portfolio and I fell in love with his art right away. Carlos helped put us in contact and Erik was excited about the story so I gave him all the existing material and he got to work.

Fred has been the colourist and letterer on all of my comic book work and I was overjoyed that he was available to work on this book. Fred has been getting more work as a penciller lately so I was lucky to catch him with a little lull in his schedule. He dug the story and we’ve always worked together very well so he came onboard. Fred is very adaptable as a colourist, so I always know I can trust him to hit the right notes when it comes to finishing a book.

Me: There are also variant covers by Bill McKay (Zombie Tramp) and Andy Belanger (Southern Cross, Mother Trucker). How does each of their variants present the world of Chance For Survival differently?

Ruttgaizer: Bill is known for drawing sexy women and his rendition of Chance certainly fits the bill. The book isn’t meant to be salacious but love, lust, and sex are going to be part of the story. I think Bill’s cover pairs very well with the cosplay cover we shot with model Bee Dawley (aka former Naked News anchor Kat Curtis). 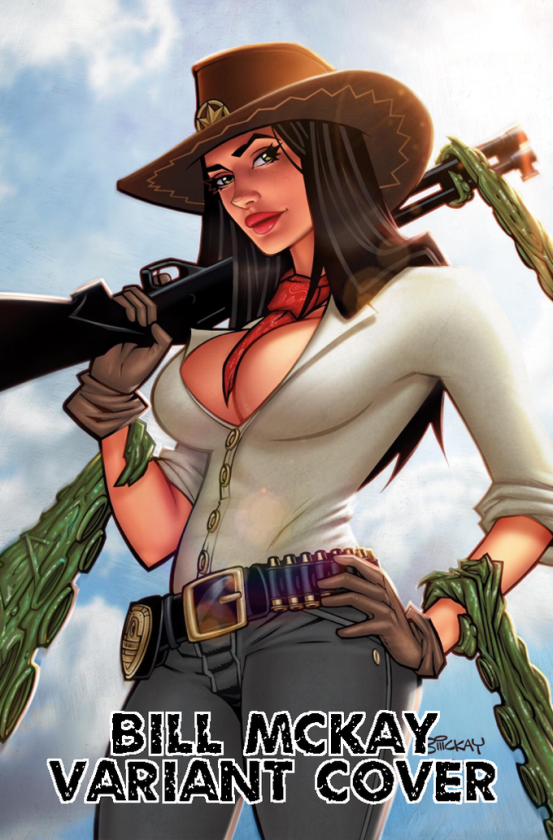 Andy’s cover features a sexy version of Chance but surrounded on all sides by monsters, fighting for her life. This is a dangerous world, and Andy’s cover presents that very well. In that way, it pairs very well with Erik’s cover of Chance on horseback, shooting a horde of creatures. 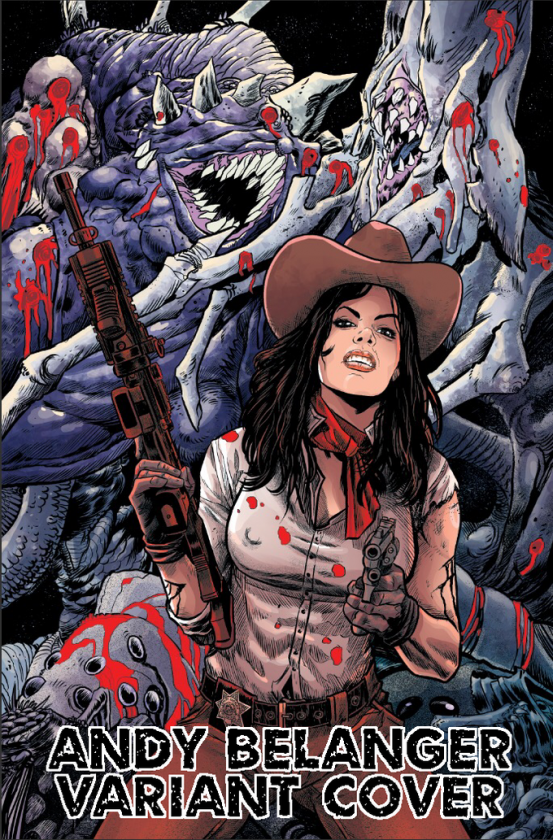 Me: What’s the number one reason why people should pledge money to your project?

Ruttgaizer: People should pledge money to Chance For Survival because we are making a really damn good book here and bringing it to them without all the bullshit of dealing with bad publishers and greedy middlemen. In my short time in comics, I’ve seen some terrible deals and I’ve dealt with some awful publishers. By self-publishing with the support of backers on Kickstarter, we avoid the hindrance of loophole-filled contracts and empty promises from predatory publishers.

My artists are getting paid fair rates for their work and our supporters will get the first issue of a terrific new comic book series in exchange for their faith in us and their hard-earned money.

Ruttgaizer: Breaking in as a writer is tough but, with webcomics, on-demand printing, and crowdfunding, there are fewer barriers than ever to publishing your work. Find an artist or draw it yourself but, either way, start creating.

I was once told that “self-publishing ain’t publishing at all.” That’s bullshit. What you create is valid. But be realistic about the quality of what you’re creating, work to improve it, and be prepared to work even harder to get it into people’s hands.

Me: Promote yourself! What other projects do you have in the works right now that people can look forward to in the near future?

Ruttgaizer: Well, I’ll be working on Chance For Survival intermittently for the next year or so. I also have a graphic novel script I need to work on and I finally have a story I like for a second volume of Heroes of Homeroom C, so that’s probably happening in 2022 as well.

You can find me on all social media (Twitter, Twitch, Instagram, YouTube, and Patreon) at @MyNameIsKingdom and find the Kickstarter for Chance For Survival at www.Kickstartthiscomic.com. The book is funding until 11pm EST on Wednesday, November 24th, and we hope you’ll join us to make the book happen!

Me: Thanks for taking the time to answer a few interviews questions! Readers interested in Chance For Survival can back the Kickstarter here.

Name your favorite three members of the extended Batman family and support team.