The pop culture website Soda and Telepath’s Anthony Pollock and crew are helming an anthology featuring post-apocalyptic stories. I speak in-depth with Anthony about the importance of telling these stories in this current climate as well as get a ton of advice about anthologies, project management, and more.

The anthology Producing the End of the World is 160 pages with 18 stories each exploring a different post-apocalyptic scenario. From concepts such as a baby’s swaddling cloth color determining their life and death to characters’ goals including getting a blue raspberry syrup bottle, this anthology runs the gamut of end of the world stories. A complete list of the up-and-coming creative team is available on the Kickstarter page.

Update (6/6/2022): The original Kickstarter was unfortunately unsuccessfully, but the project has since been revamped and relaunched. You can check out the new campaign for Producing the End of the World Issue 1 (72 Epic Pages) here.

Anthology editor Anthony Pollock spoke to me in detail about his post-apocalyptic project:

Me: For people who may be a bit hesitant to read post-apocalyptic stories because of the current climate we’re living in, why did you feel it was important to create an anthology revolving around them?

Pollock: The way that the future has been conceived and depicted across the last hundred years has always intrigued me. With that comes my love for the sub-genre of post-apocalyptic (and, in part, dystopian) stories. To me, the best thing about science fiction has always been the narrative and commentary it provides on the human condition. So, while you might assume that Producing the End of the World is a gruesome anthology about death and decay, the reality is this anthology is about the humanistic component of end of the world scenarios. How specific characters would react to a variety of situations they are placed in, courtesy of the writers and artists.

Me: If you had to pick one of the post-apocalyptic scenarios depicted in this anthology to survive in, which one would you choose and why?

Pollock: “The Opal Idol,” by Gary Proudley and Rob Gaughran, depicts an apocalyptic event that effects an ancient civilisation. I’d like to think that my knowledge of the modern world would help me navigate an ancient world to my benefit. Otherwise, I just haven’t been paying attention.

Me: What about the post-apocalyptic scenario in this anthology that you would want to avoid the most (and why)?

Pollock: Alex Dandino and Chris Maiurro have created an outstanding short story called “The Last Song Will Not Be Freebird.” While it’s a fun story with the last gig on earth as the backdrop, it does involve an apocalypse via meteor, and that’s the number one apocalypse scenario that everyone wants to avoid, isn’t it? 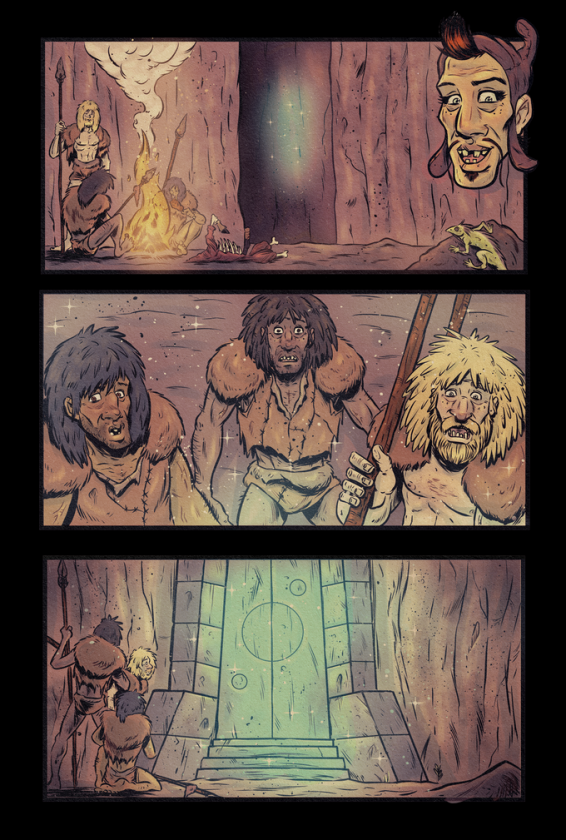 Me: You’ll also be including a couple of your own stories in the anthology if you hit some stretch goals. Can you give us a bit of an inkling regarding what these stories are about?

Pollock: One is a time travel-related story that involves a Hitler-esque figure who doesn’t know she’s foretold to become the next Hitler. The other is about the adventures of a super-strong mutant girl and her pet speeder which looks like a shark.

Me: You’ve done a lot of amazing work through the pop culture website Soda and Telepaths, which is the force behind this Kickstarter. What part has the website played in the creation of this project and in your journey as a comic book creator?

Pollock: Thank you. The part of reporting on comic books that’s played a part in the creation of this project is knowing and understanding the various moving parts in the creation of a comic book. From pitching your idea to bringing the creative team on board to launching a Kickstarter. There are so many moving parts when it comes to comics so I would highly recommend anyone interested in comics creation or publishing to start with reviews. Writing about any subject matter can greatly enhance your understanding of it. If you go straight into a Kickstarter without understanding the fundamentals, then you’re starting at a huge disadvantage to your competitors. 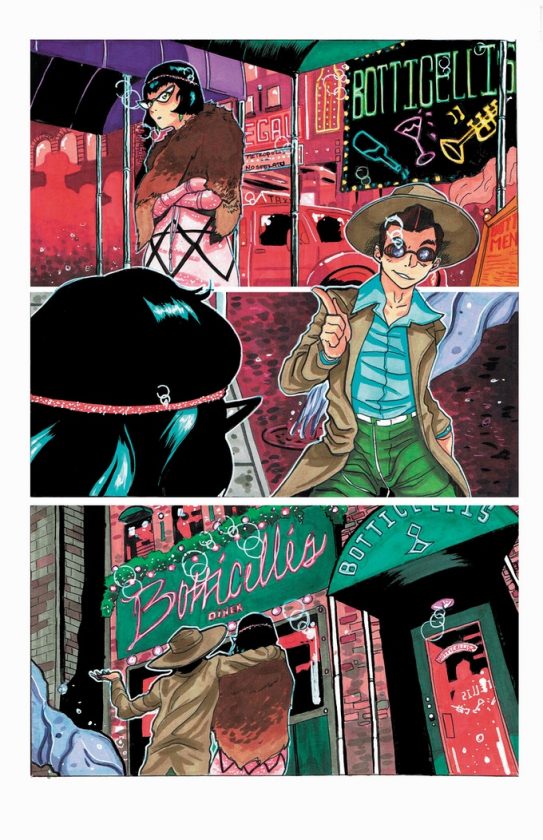 Me: What is the number one reason why backers should pledge money to your Kickstarter?

Pollock: To support a fantastic group of up-and-coming comic book creators. This isn’t just for me. It’s for them to add more to their collective portfolios.

Me: One of the rewards you’re including is your project management services. Can you tell us a bit about previous projects you’ve worked on in this capacity and share some of your favorite pieces of advice for project managers?

Pollock: I’ve project managed four different campaigns previously. All of which achieved their funding goals. It depends on the scope of the campaign and how organised the creator is when I come on board. However, I would say my biggest tip is to be organised. Drawing out your campaign ideas like a mindmap is helpful in the early planning stages. Just like researching other successful campaigns can also be helpful. The more ideas you get down in the early planning stage the sooner you will begin to identify the holes or gaps in your campaign plans. A simple SWOT analysis, although a 40-year-old marketing methodology, can prove to be very beneficial.

When it comes to Press, make sure you approach podcasts and news outlets a minimum of one month in advance. Don’t approach them with only two weeks of your campaign left. You’re wasting their time and yours.

Finally, there’s a lot to be said about word of mouth. Let everyone you know who has an interest in comics about your project. Leave no stone unturned. Utilise as many marketing strategies as possible. 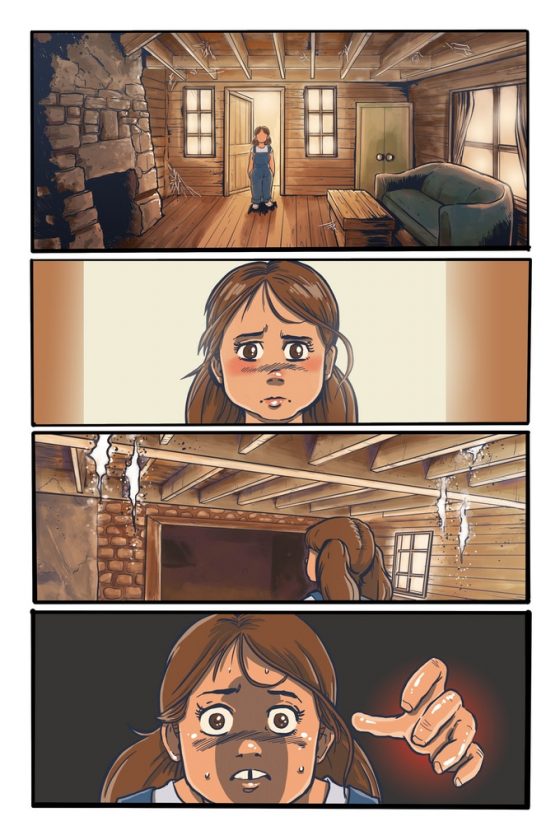 Me: When helming an anthology of this size, what are your top three tips for fellow curators?

Pollock: 1. Set yourself a timeline and be firm with it. If creators can’t stick to that timeline then they’re being unprofessional and that’s on them, not you.

Me: Promote yourself! Let us know what other projects you have in the works that we can look forward to in the future.

Pollock: I’ve recently started a Substack where every week I weigh in with handy tips and news that add value to comics and graphic novel fans and creators alike. I’d recommend subscribing over there so you don’t miss out on those substack issues. Here’s the link: http://graphicopinions.substack.com/

You can also follow @SodaTelepaths on Twitter. That’s where the majority of my comics work is posted.

Me: Thanks for taking the time to explore the end of the world with us! Readers can back their own slice of dystopia on the Producing the End of the World Kickstarter page. 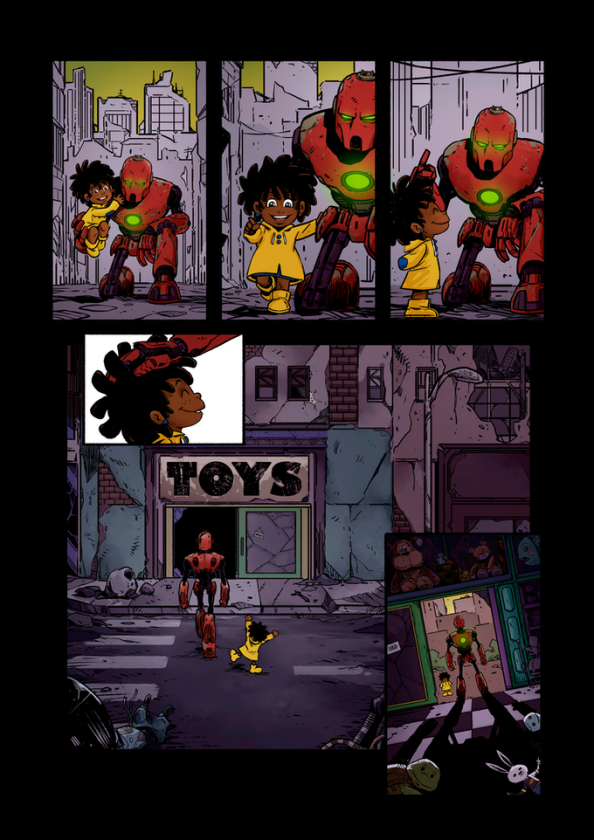