Ryan Claytor combined his artistic talents to create a comic book version out of his late grandfather’s poetry. A Hunter’s Tale is the result of this emotionally-charged creation.

A Hunter’s Tale is a 32-page comic book written by the late Charles Kermit Claytor (1905-1999). In addition to his poetry, Charles was a railroad dispatcher and expert marksman. His grandson, Ryan Claytor, adapted the poem into this comic book format and illustrated it himself. Working in the Department of Art, Art History, and Design, Ryan is a professor at Michigan State University who oversees their Comic Art and Graphic Novel Minor and teaches their comics studio courses.

The poem revolves around a hunter and his prey with empathy serving as a core component of the story. On his Kickstarter page, Ryan emphasizes the timely importance of this poem given the current state of the world with people drifting further apart. If a marksman and a deer can learn to understand each other, maybe there’s hope for the rest of us.

The Kickstarter has already blown past its $2,224 goal and will continue to run until February 1, 2022, at 3:01 AM EST. Some rewards backers can get include a digital ($5) and physical ($10) copy of A Hunter’s Tale as well as limited-edition art prints ($25) and even an original art page ($150). Several stretch goals have already been unlocked thanks to the massive success of the Kickstarter, so help unlock more by backing A Hunter’s Tale Kickstarter.

I spoke with Ryan below about his Kickstarter project and the significance of adapting this particular poem of his grandfather’s to comics.

Nicole D’Andria: Why do you feel comics are the perfect medium for your grandfather’s poem?

Ryan Claytor: Hi Nicole. Well, first, thank you for chatting with me here on Kickstart the Week. I really appreciate your time. Regarding your question about the choice of medium, I think my grandfather’s poem is a little different from what I think of as traditional poetry, which I feel requires multiple reads and often considerable work to interpret. His poem, “A Hunter’s Tale,” by contrast feels so narratively driven and quite visual in its descriptions. I’ve been able to see this poem in my mind for many years, but only recently have my skills as a cartoonist started to catch up with what I’ve been seeing in my mind for so long. 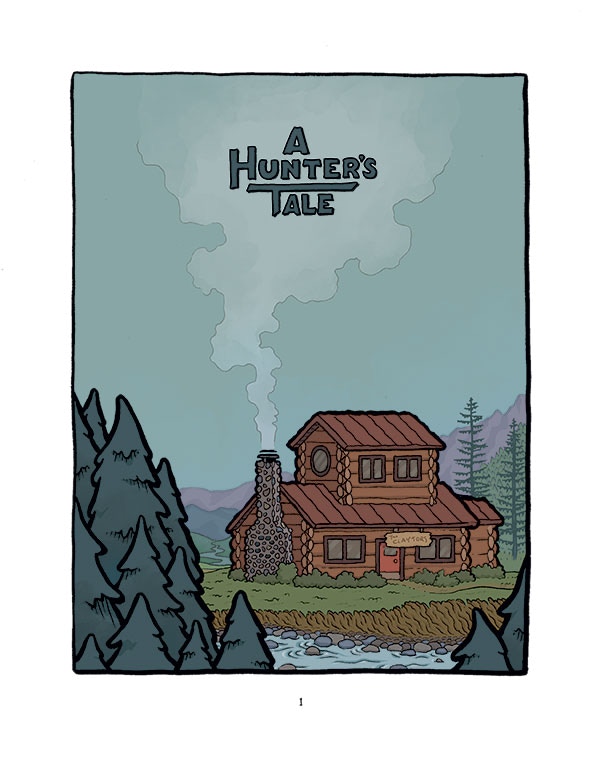 ND: Since you mention on Kickstarter that this is your favorite poem by your grandfather, why is this one your favorite?

RC: I think the reason it’s resonated with me is because of its message of radical empathy. Especially in our recent past, leading up to and throughout the pandemic, people have had an increasingly difficult time, not only seeing things from another perspective but unfortunately devolving to the point of cutting off communication and in many cases much worse. If we as a society, a culture, and a global community are going to heal, we’re all going to need to take a radically empathetic stance. 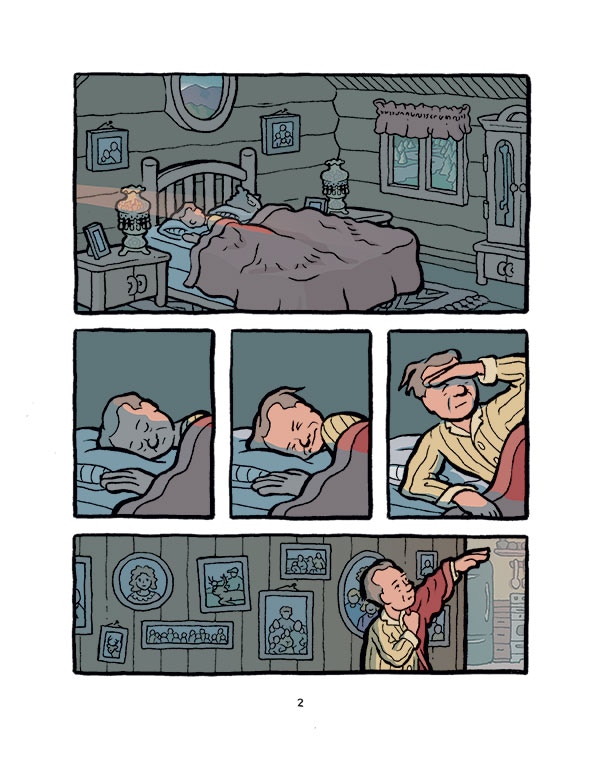 ND: The empathy the poem and in turn the comic explores occurs between a hunter and his prey who normally couldn’t be more different. How would you describe this particular hunter and prey that are the subjects of this poem?

RC: At the risk of saying too much, they’re both pretty open-minded fellows. Something to strive for in our daily lives. 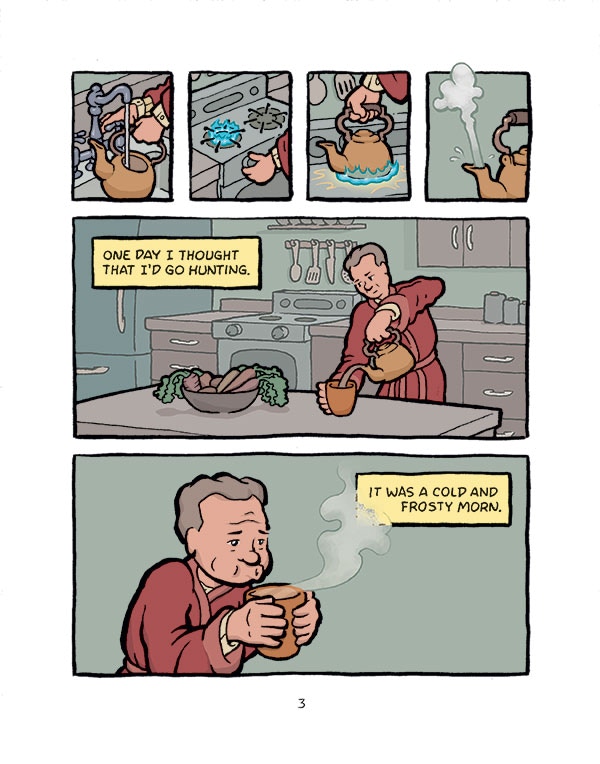 ND: What is the number one reason why you believe people should pledge money to your project?

RC: I feel like this project is less about the money than it is about getting this book into people’s hands and allowing my grandfather’s creative work and message to live beyond his time on earth. Even if this Kickstarter fails, I’ll find a way to print and share this work. It’s that important to me. 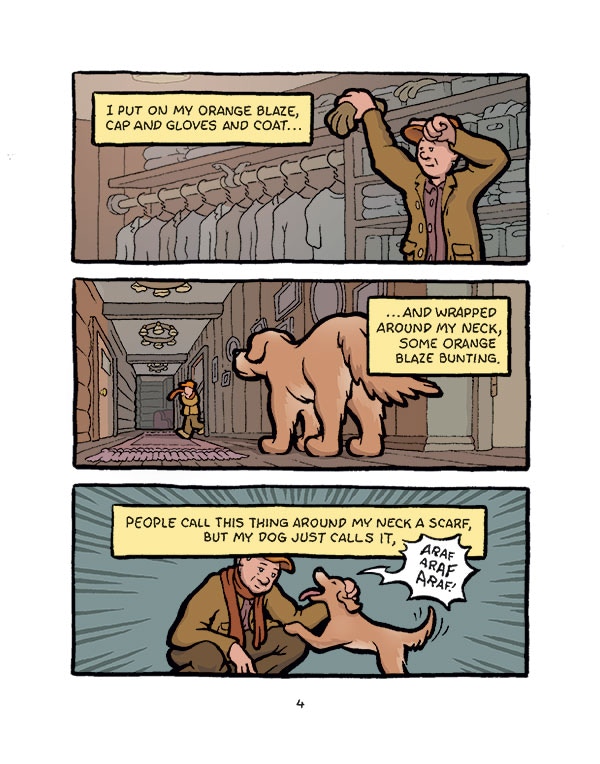 ND: How would you describe the adaptation process and what tips would you give to those interested in interpreting poems into comic book form?

RC: Since my collaborator for this project, my grandfather, is no longer around, the approach I took was to remain vehemently faithful to his words. The book will even include his poem, as it was originally written, in the back matter. I thought that might add an additional layer of preserving his work and allow interested folks to compare the original piece of writing with my illustrated version. 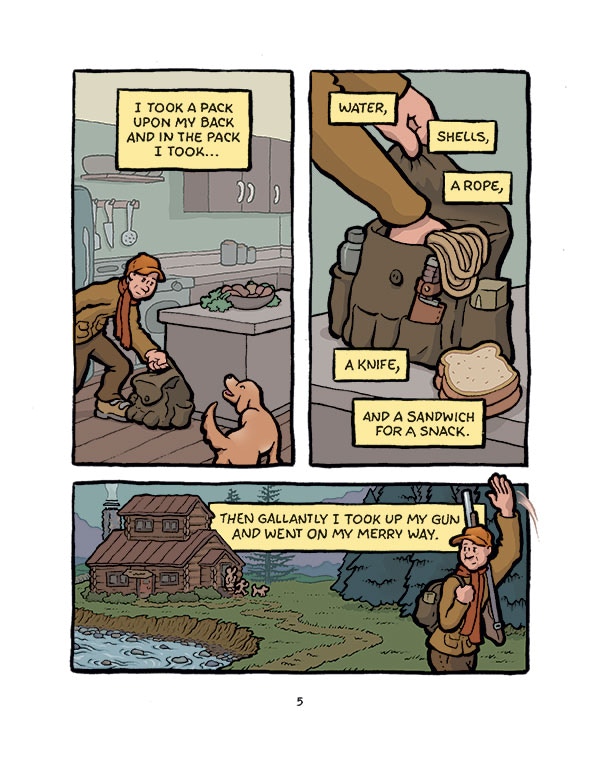 ND: What are some poems and comics that inspire you and why are they an inspiration to you?

RC: Regarding comics, I’ve been a long-time fan of Sergio Aragones’ Groo the Wanderer and Stan Sakai’s Usagi Yojimbo. Now that I’m thinking about it, Groo has a fair amount of rhyming poetry in it. Ha-ha! …never really thought about that until now. And Usagi issues are always such tightly constructed stories, often told in a single issue. It’s inspiring for me to see cartoonists I admired in my youth still producing their creator-owned work well over 30 years later! 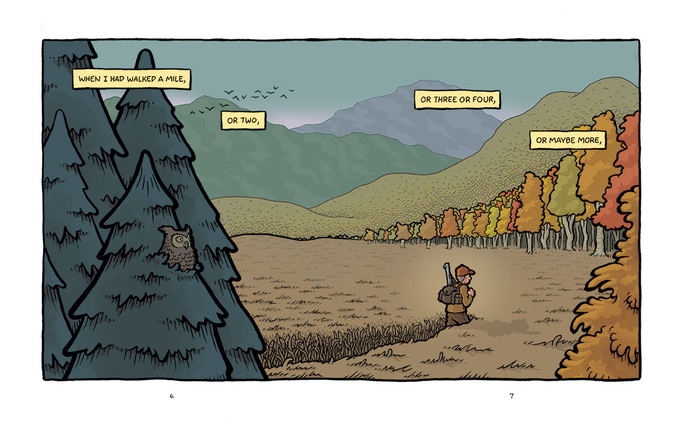 ND: What inspirational words do you have for aspiring comic book artists?

RC: Well, aspiring comic book artists, as you know, comics are hard. They’re an artistic and design puzzle of massive proportions. But at the end of the day, if you’re like me, it’s hard to imagine a medium better suited for idiosyncratic, personalized, singular visions in a visual form. You can create an uncompromising work that is wholly your own if you only chip away at it a little bit each day. The name of my publishing company is based on a saying my dad used to tell all my siblings and me as kids. He’d say, “Welp, it’s like eating an elephant. Just do it one bite at a time, and before you know it, you’re done.” I think about that a lot when I have big tasks in front of me, and MANY times along the path of bringing a comic book to fruition. So, I guess one thing I’d tell new cartoonists is that they’re creating something invaluable by sharing their personal vision with the world. …and remember to keep eating your elephant. 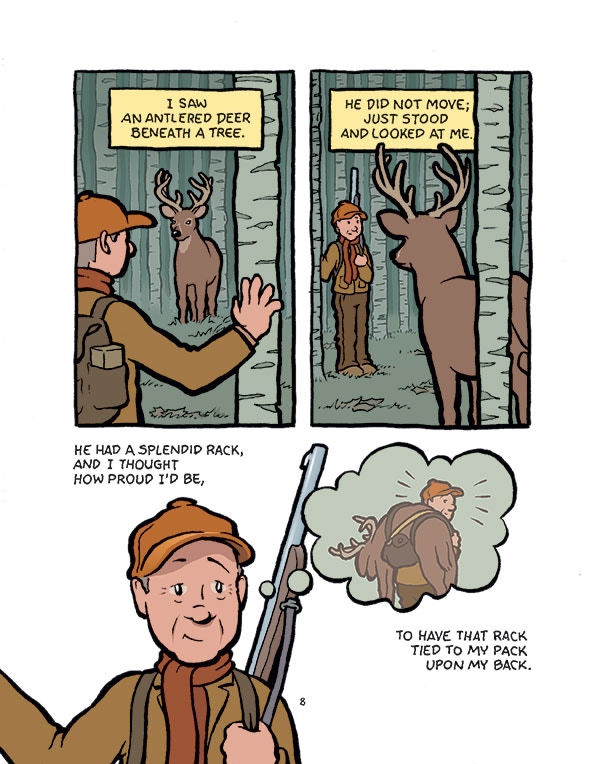 ND: Promote yourself! What project(s) do you have coming out soon that we can also look forward to?

RC:  I appreciate the offer but, honestly, I’m having a hard time seeing past this Kickstarter right now. Ha-ha! It’s pretty all-encompassing. I’d love for people to check out the project at www.AHuntersTale.com, which will take you directly there. But while conducting this campaign has taken a lot of time, it’s been really fun getting to tell so many people about my grandfather’s poem that I’ve admired for almost 40 years. It’s an amazing feeling to have a closer creative connection to the poem, and to him, and soon be able to share his work with a wider audience than he was able to reach during his lifetime.

ND: Thank you for your inspiration to share your grandfather’s poetry with us in the art form of comics, Ryan. Readers can check out the official Kickstarter page for A Hunter’s Tale here.