The comic book anthology KOLCHAK: THE NIGHT STALKER 50TH ANNIVERSARY spans numerous decades, featuring ten original comic book stories from the talented minds of R.C. Matheson, Nancy Collins, Peter David, and many more. The full line-up of creative teams and stories is on the official Kickstarter page. This collection follows Carl Kolchak, a monster-hunting reporter, from his first case in high school during the 1930s to his latest adventure in the 21 century. See the character that inspired supernatural series such as The X-Files!

KOLCHAK: THE NIGHT STALKER 50TH ANNIVERSARY is being published by Moonstone Books, a Chicago-based company that publishes licensed properties featuring the likes of Green Hornet and Kolchak as well as western stories like Lone Ranger and Tonto. The Kolchak anthology was put together and edited by James Aquilone, the managing editor of Weird Tales magazine. He also edited the prose horror collection Classic Monsters Unleashed, which I talked with him about on “Kickstart the Week.” Letters were handled by Tom Napolitano (Lugosi: Rise and Fall of Hollywood’s Dracula) with colors by Zac Atkinson.

The Kickstarter is currently approaching $60,000, having already fulfilled its $14,500 goal. It will remain live to back until February 11, 2022, at 12:00 AM EST. Rewards include a special one-shot comic book featuring three stories from the anthology ($8 for the physical, $12 for the digital); the standard anthology itself, which spans over 120 pages of original stories as well as includes an intro by R.C. Matheson and a couple of essays ($12 for digital, $32 for softcover); and the deluxe anthology that is over 200 pages, which includes not just ten comic book stories but also ten prose stories ($15 for digital, $48 for hardcover). For a ton of other fun rewards, check out the KOLCHAK: THE NIGHT STALKER 50TH ANNIVERSARY Kickstarter.

I’m talking with James once again, this time about the history behind Kolchak and how this character has endured and remained relevant after 50 years. Plus showing off the gorgeous array of covers available through this Kickstarter!

Nicole D’Andria (ND): For those unfamiliar, who is Kolchak, and can you tell us a bit about his previous escapades through various mediums?

James Aquilone (JA): Kolchak was — and still is — a monster-hunting reporter in a blue seersucker suit and straw hat. He was the creation of Jeff Rice, whose then-unpublished novel was turned into the 1972 TV movie The Nightstalker, which was the highest-rated TV movie at the time, and was the basis for the 1973 TV movie The Strangler and the one-season Kolchak TV series on ABC.

Moonstone Books has been publishing Kolchak novels, short stories, and comics for the past 15 years — and I’m working with Moonstone and publisher Joe Gentile on this very special 50th anniversary project. 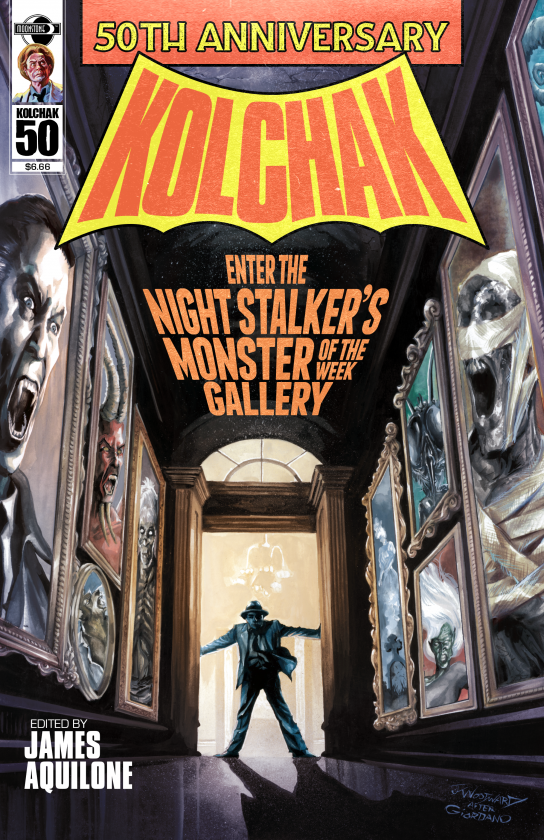 ND: This graphic novel marks Kolchak’s 50th anniversary. What is it about this character/concept that you think has allowed it to endure the test of time for half a century?

JA: To know Carl Kolchak is to love him. He’s the perpetual underdog who is never believed or supported but somehow finds a way to slay the monster and save the day. And though he’s never given credit, he continues to do it because he’s obsessed with unearthing the truth. You can’t help but root for somehow like. Besides, he wears a cool hat.

ND: As mentioned on the campaign page, Kolchak is a huge inspiration for The X-Files and dozens of other supernatural shows. What other shows do you feel Kolchak has inspired and how do you feel those shows took inspiration from him?

JA: Kolchak was a direct inspiration for The X-Files and certainly influenced other monster-of-week shows like Supernatural and Buffy the Vampire Slayer — even Ash Vs. the Evil Dead — as well as a host of Urban Fantasy novels like the Dresden Files.

Kolchak was integral to the horror/humor genre and the occult investigator genre. Horror on TV wouldn’t have been the same without Kolchak. 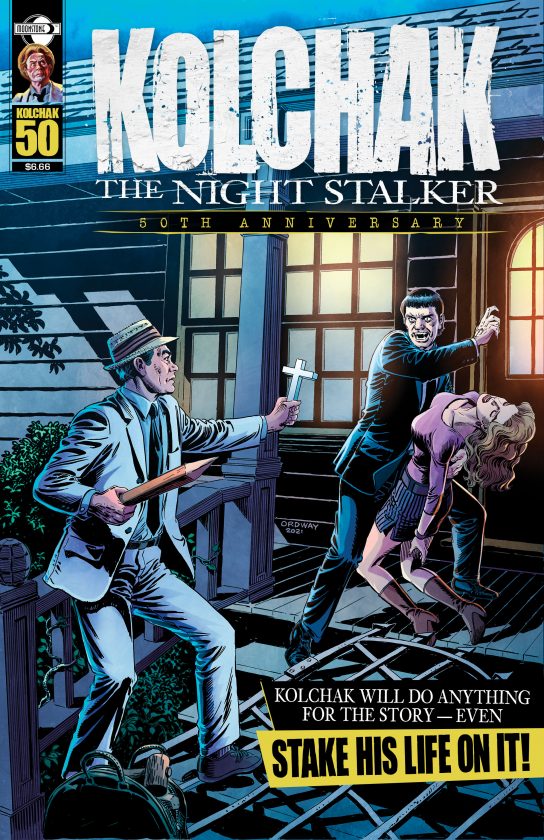 ND: This anthology includes ten comic stories, each taking place during a particular decade, covering over eight decades. How was it decided to take this particular approach with the anthology?

JA: I thought it was a great way to celebrate the 50th anniversary, to look at the (near) entirety of Kolchak’s life. We’ve never seen Kolchak as a teenager or an old man or even a 30-something. We have David Avallone writing an origin story, set in the late ’30s, with Kolchak taking his first reporting job on his high school newspaper, as well as his final story in the early ’00s, written by James Chambers, who won a Stoker award for his graphic novel Kolchak the Night Stalker: The Forgotten Lore of Edgar Allan Poe.

Other stories will be written by Rodney Barnes (Killadelphia), Kim Newman (Anno Dracula) and Nancy Collins (Swamp Thing) — oh, and we just added Gabriel Hardman (Green Lantern: Earth One), who will write and illustrate a story. So we’ll actually have 11 stories now! 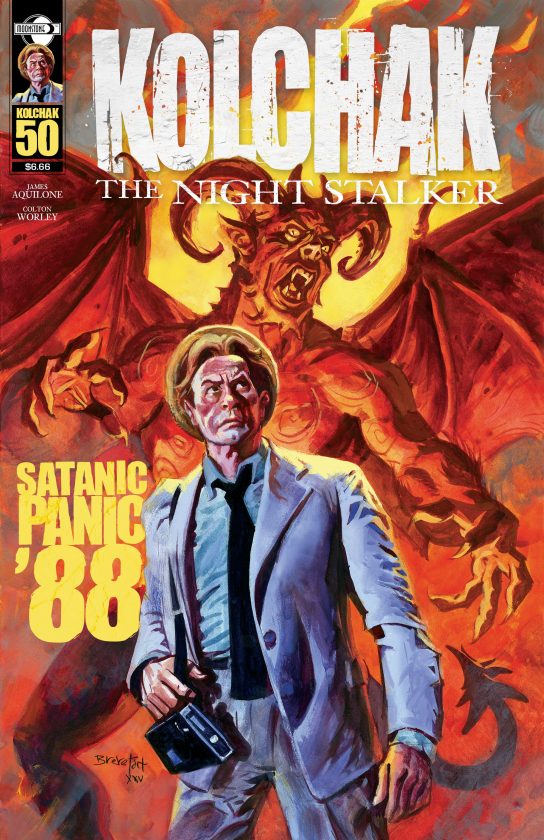 JA: I grew up in the ’80s, so it was natural for me to set a story in that decade, and just as chance would have it, after all the other writers picked their decades, the Reagan Era was the only one left.

“Satanic Panic ’88” sees Kolchak investigating the disappearance of a teen girl in a small town that’s a little obsessed with the Devil. It’s being illustrated by Colton Worley (The Shadow) and will be available in both versions of the anthology (softcover and hardcover) as well as a 40-page one-shot comic book. 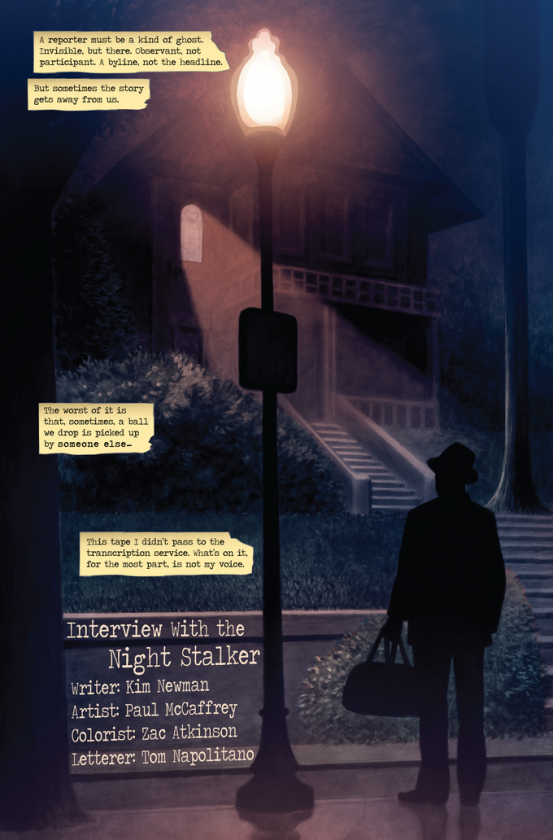 ND: For backers who get the deluxe version of the anthology, there will be an additional ten prose stories. Can you tell us a bit about this line-up of authors and concepts?

JA: For the prose stories, we’ll be getting them from an open submission period that will begin immediately after the Kickstarter campaign. And the theme will be the same as the comic stories: stories throughout Kolchak’s life. Anyone who’s interested in submitting a story, can check out the guidelines on my website.

ND: You’ve already given readers a lot of great advice regarding anthologies and Kickstarter in the past when we talked about your super successful Kickstarter, Classic Monsters Unleashed. Since that campaign, have you developed any additional advice when it comes to creating Kickstarters and anthologies?

JA: Be prepared for a lot of work. Take some days off. And have fun. Because it’s a long and stressful ride. 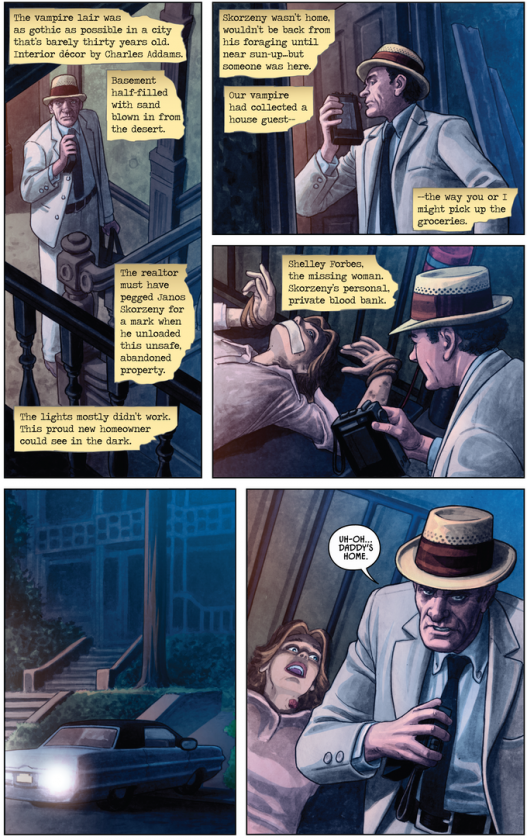 ND: Promote yourself! Let us know what else you’re working on and what else we can expect from you in the future.

JA: I should be doing another Kickstarter in the summer, for the follow-up to Classic Monsters Unleashed. The book was so successful that we decided to do a series of anthologies. The next one is called Shakespeare Unleashed, a prose anthology of horror stories based on Shakespearean characters and plays. We already have a great lineup, and as we did with the first book, we’ll open to submissions after the campaign.

ND: Thank you and the entire team behind KOLCHAK: THE NIGHT STALKER 50TH ANNIVERSARY for expanding the impressive resume of Carl Kolchak in this special anthology. Readers interested in seeing how this sleuth triumphs against the supernatural odds can consider backing the Kickstarter here.

A Hunter’s Tale: A Comics Poem

i interviewed @ComicUno in the twelfth episode of my podcast:

(we talk reviewing #comic books, her 1.5m+ #viral video, what makes a good #Kickstarter, getting hate for being a female/queer #ContentCreator, and staying active on #YouTube over a decade)