Journey to a small West Virginia town in the psychological horror that is Bear Skin. We’re learning more about the monsters lurking in this place and the man in a bear suit who’s after them from creator Jason Pell.

Bear Skin is an 80+ page graphic novel about Andy, a man in a bear suit who has been killing the townsfolk because of his delusions making him believe they are secretly monsters. Then real monsters start showing up and the town of Grantsville needs to rely on Andy to survive.

The creator and writer of Bear Skin is Jason Pell, an indie artist who has several independent creations under his belt. This includes Pinpricks, which is also the series that Andy first appeared in. Pell has worked on American Mythology series like Zorro and Hatchet. The award-winning artist for Bear Skin is Jok, who won the “Carlos Trillo” award for best artist thanks to his creator-owned book Merlin and Hector. He’s worked for a variety of notable publishers as well, including Scholastic, Capstone, and Heavy Metal. Other members of the creative team include editor John MacLeod and producer Mike Tener.

The Kickstarter has already raised over double its intended $5,000 goal and will remain live until February 9, 2022, at 9:30 PM EST. The digital ($13) and signed premium hardcover ($25) of Bear Skin are available along with Jason Pell’s other works as well as unique rewards like an exclusive augmented reality print ($25) and a limited edition cover by Jok ($35). Check out the rest of the reward and consider backing the project on the official Kickstarter page.

I spoke with writer Jason Pell about Bear Skin.

Nicole D’Andria (ND): This graphic novel has been described as appealing to those who love psychological horror and Lovecraftian monsters. What is it about these two elements that you love enough to include them as aspects in your graphic novel?

Jason Pell (JP): Addressing the psychological horror aspect. A writer will write scary scenes, and an artist, if you are truly lucky, like me with Jok, will make them truly breathe. But beyond that, I think the most interesting thing about horror is how varied the reactions are to truly facing evil. I think most of us are afraid to admit, we might not be as brave as we imagine ourselves.

For the Lovecraftian influences, it does shares themes of a vast universe full of darkness and chaos. (And monsters.) But beyond that, I don’t personally consider Bear Skin necessarily a Lovecraft-inspired tale. Mike Tener is the fellow that wrote that description, and he’s not wrong. There is definitely a bit of Lovecraft in there, but there are just as many other writers’ influences as well. 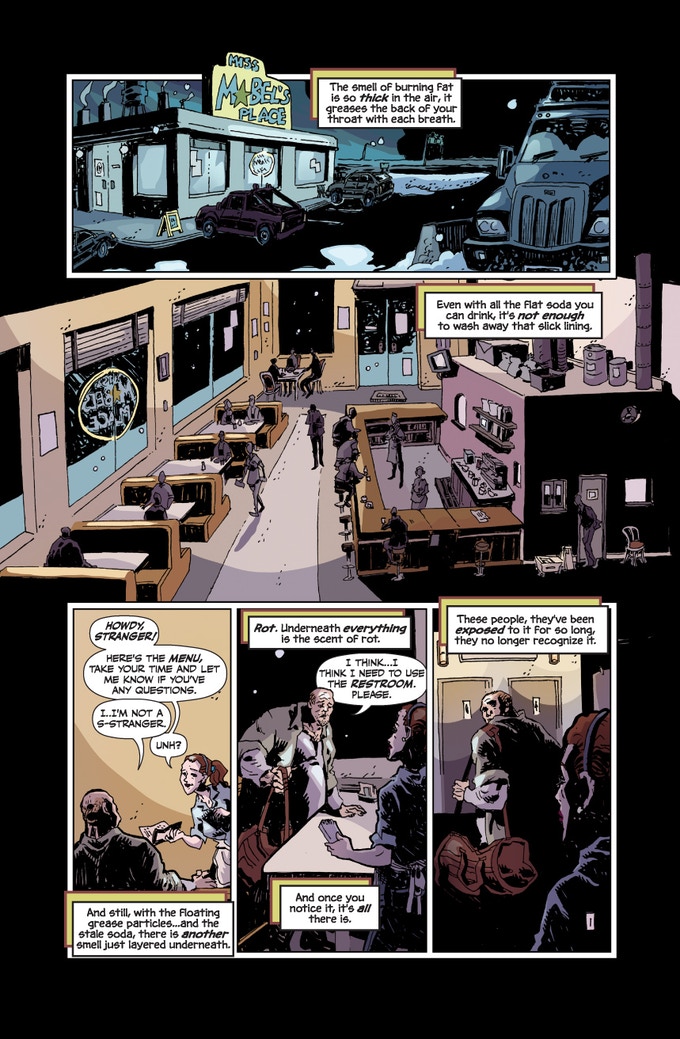 ND: Who is the “madman” in the bear suit? Do you want readers to root for him or question whether he’s a monster of his own making?

JP: Andy is a man still dealing with extreme trauma from his youth. Trauma that’s turned a little boy into a lethal killer that runs toward the things that would frighten anyone else. Whether it’s fearlessness or suicidal tendencies, it’s hard to distinguish.

Sure, readers can root for him. Or they can despise him. It all comes down to how the individual reader relates to the character. If you are looking for him to be a “good” guy or “bad” guy, I don’t think that’s going to be so easy to decide. Just as it is with anyone since there are both aspects in everyone.

ND: What is the significance of setting this story in Grantsville, West Virginia, and how does the location add to the story?

JP: I live in West Virginia, and there is something about the small towns here. They are perfectly nice and friendly for the most part. But sometimes, for a suspicious person like myself, that can feel all too alien. Like, just beneath the skin, there is something hidden. Now, that is truly never the case, except in this graphic novel. That is the case. 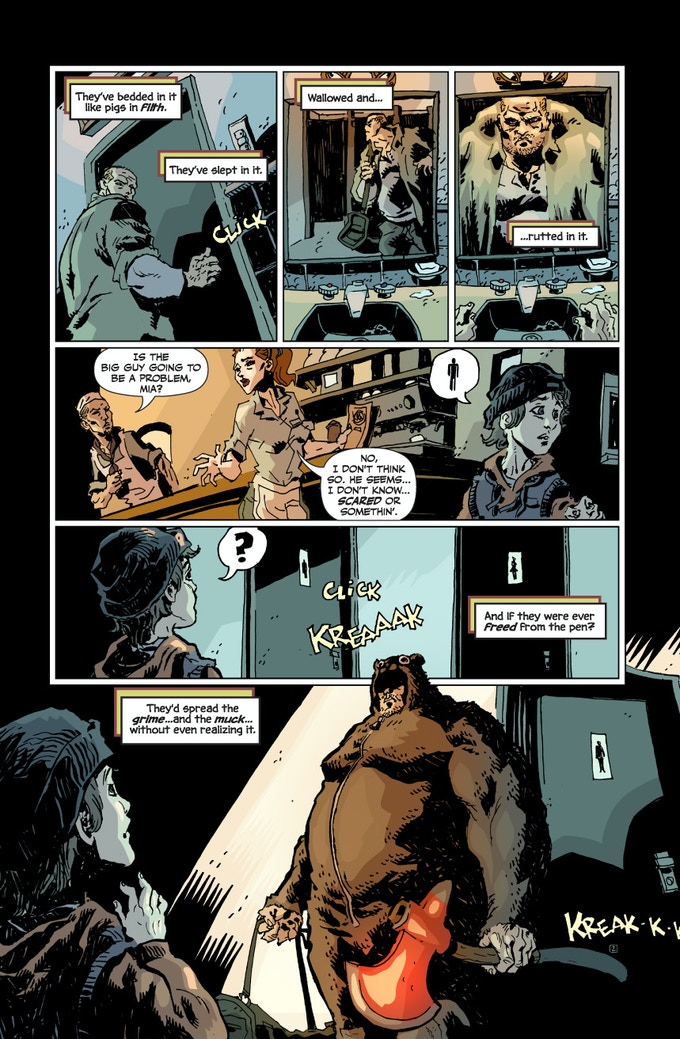 JP: I’ll name many of the monsters in the script just for the artist, even though they aren’t named in the book. For example, there is a monster that is simply called the Weeping Woman. Giving it that name with a slight description will help Jok understand what emotion I want to invoke. Jok takes that and runs with it making the creatures stand out in unique ways.

ND: Your artist, Jok, has an impressive line of credits under his belt (in addition to your own wonderful titles) and also won the prestigious “Carlos Trillo” award. What is it about his art style that determined for you that he would be the best artist for Bear Skin?

JP: I had worked with Jok a few times, and when I wrote Bear Skin, I had him in mind. I knew the style needed to have a grit that I think Jok does so well! This book is dark and moody, and Jok’s art, in my opinion, is perfectly suited for it. 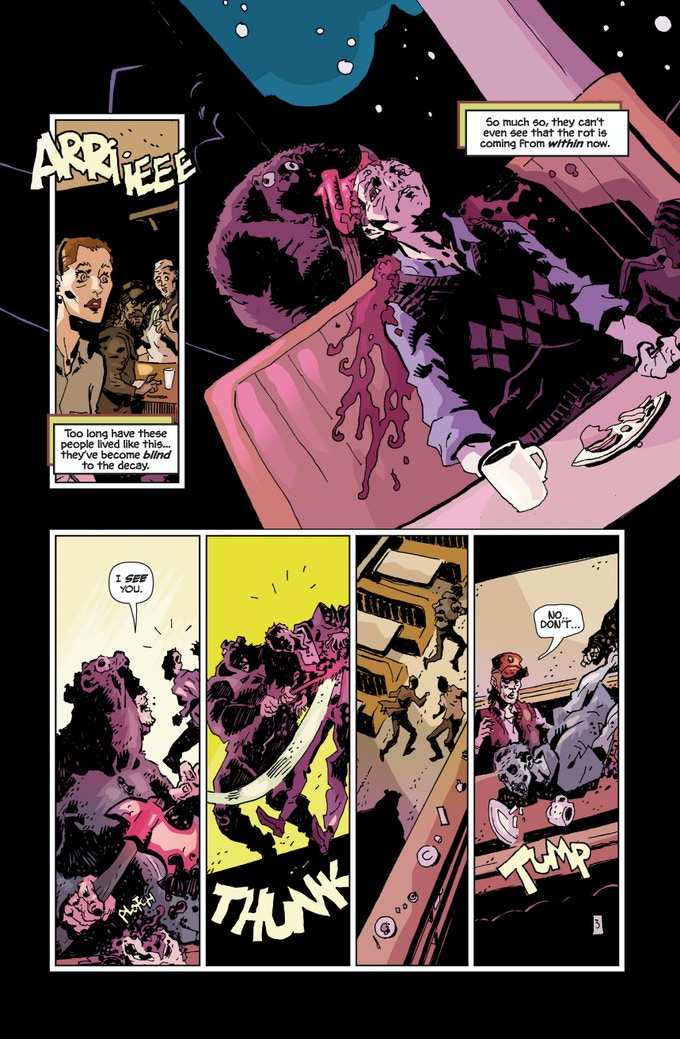 ND: One of the Kickstarter rewards available includes a bundle of your books, including Pinpricks, Zombie Highway, Suicide Five, and Season’s End. For readers unfamiliar with these works, can you give us a one-sentence rundown of each one in terms of plot and appeal?

JP: Zombie Highway—Four thieves accidentally begin the end of the world and are just as interested in getting paid as they are in stopping the apocalypse.

Pinpricks—101 short stories and illustrations of misfits, monsters, and the terminally awkward.

Suicide 5—A game of fame between a small group of artists that has a very (intentionally) fatal outcome.

Season’s End—New dark and mysterious gods invade a world of fantasy, and a group of adventurers finds that some evil may be too vast to fight.

ND: How is Bear Skin unique from your previous works and in the comic landscape at large?

JP: I think nearly all my books share a bit of a dark, twisted humor. And that is present here. But I think the main protagonist being an unstable character makes the entire story feel a little…squirrelly. (West Virginia. Told you.) The whole world that Bear Skin is based in, through our “hero’s” eyes, is not as concrete as the one you and I live in. I think in that sense, it’ll stand out on its own.

ND: What is the number one reason why you think backers should pledge money to your project?

JP: Jok’s art. It’s that good. I could be a very poor butcher, and maybe I am, but Jok would make it come out looking like a four-star plate. 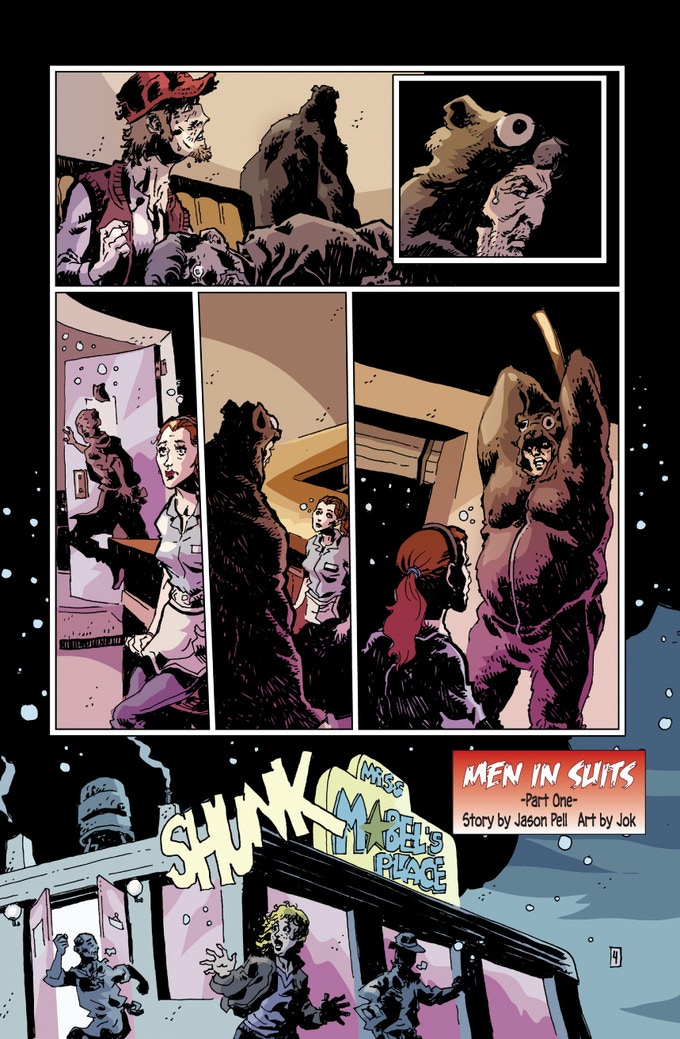 ND: What other inspirational words do you have for aspiring comic book writers?

JP: Only write what excites you. Keeping that enthusiasm, and not overthinking what anyone else may want, is the only advice I would humbly offer up.

ND: Promote yourself! Let us know what else you’re working on and what we can expect from you in the future.

JP: Currently, I’m writing and illustrating a journal for another character that first appeared in Pinpricks. (Much like how the main character in Bear Skin first showed up in Pinpricks.) The journal will be a documentation of some of the oddest monster encounters ever recorded.

Thanks so much for allowing me to talk a little about Bear Skin!

ND: Happy to give you a chance to talk about what looks like a horrifyingly good project, Jason! Thanks for taking the time to answer my questions. Readers can check out the carnage and potentially back Bear Skin on Kickstarter here. 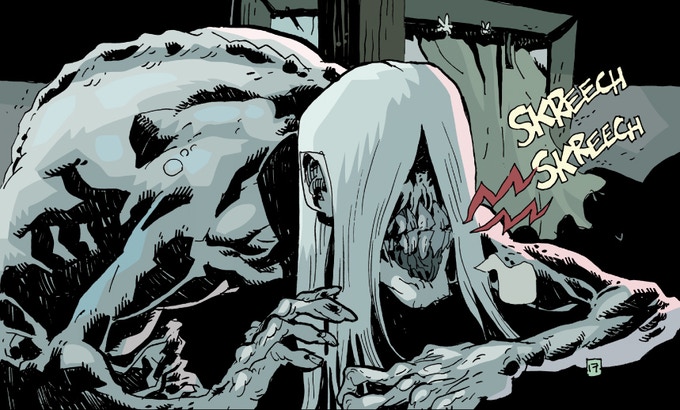 A Hunter’s Tale: A Comics Poem