I’m speaking once again to Nick Bryan, this time about Death of a Necromancer, which its Kickstarter page calls a “fun-grim pop-goth spooky provincial saga.” Nick Bryan and Robert Ahmad are reuniting once again since And It Snowed to invite readers to a small English town that welcomes a necromancer and plenty of hijinks.

Spanning 114 pages across four chapters, Death of a Necromancer revolves around Deadless Chicken, a takeaway shop owned by necromancer Dr. Victoria Hedgewood. The protagonist, Ralph Foster, goes in for a job interview but ends up as one of Victoria’s first clients, returning from the dead and taking the job at Deadless Chicken. The question becomes whether there’s a dark side to Victoria’s services.

Nick Bryan is the writer of Death of a Necromancer, and he was previously featured on “Kickstart the Week” for both his character-driven urban fantasy stories FairyFare as well as And It Snowed. Robert Ahmad joins him once again as his artist who also worked on the Scout Comics series Headless. The creative team would not be complete without colorist David Cooper (Lenny) and letterer DC Hopkins (who’s worked with every company from BOOM! Studios to DC Comics to Disney).

I talked to Nick Bryan about bringing to life this concept below!

Me: What inspired you to combine a necromancer with a fried-chicken place?

Nick Bryan (NB): Maybe I’ve just spent too long in takeaway shops, but if I was gonna perform a bunch of chicken-sacrificing rituals, it seems the logical way to monetise the remains. It’s also a fun way to add to the core metaphor of treating dark magic like a service and the consequences of that.

Plus I’m an enormous fan of livestock in comics. I just find them innately hilarious. One of my favourite past sequences from my work with Robert Ahmad was in a short story called Wanted: Brave Warriors (which you can read in the back of our The Catalyst one-shot) involving a goat meeting a grisly fate. Much like most of the chickens in Death of a Necromancer.

Apparently, my appreciation of farm animals isn’t enough to save them. 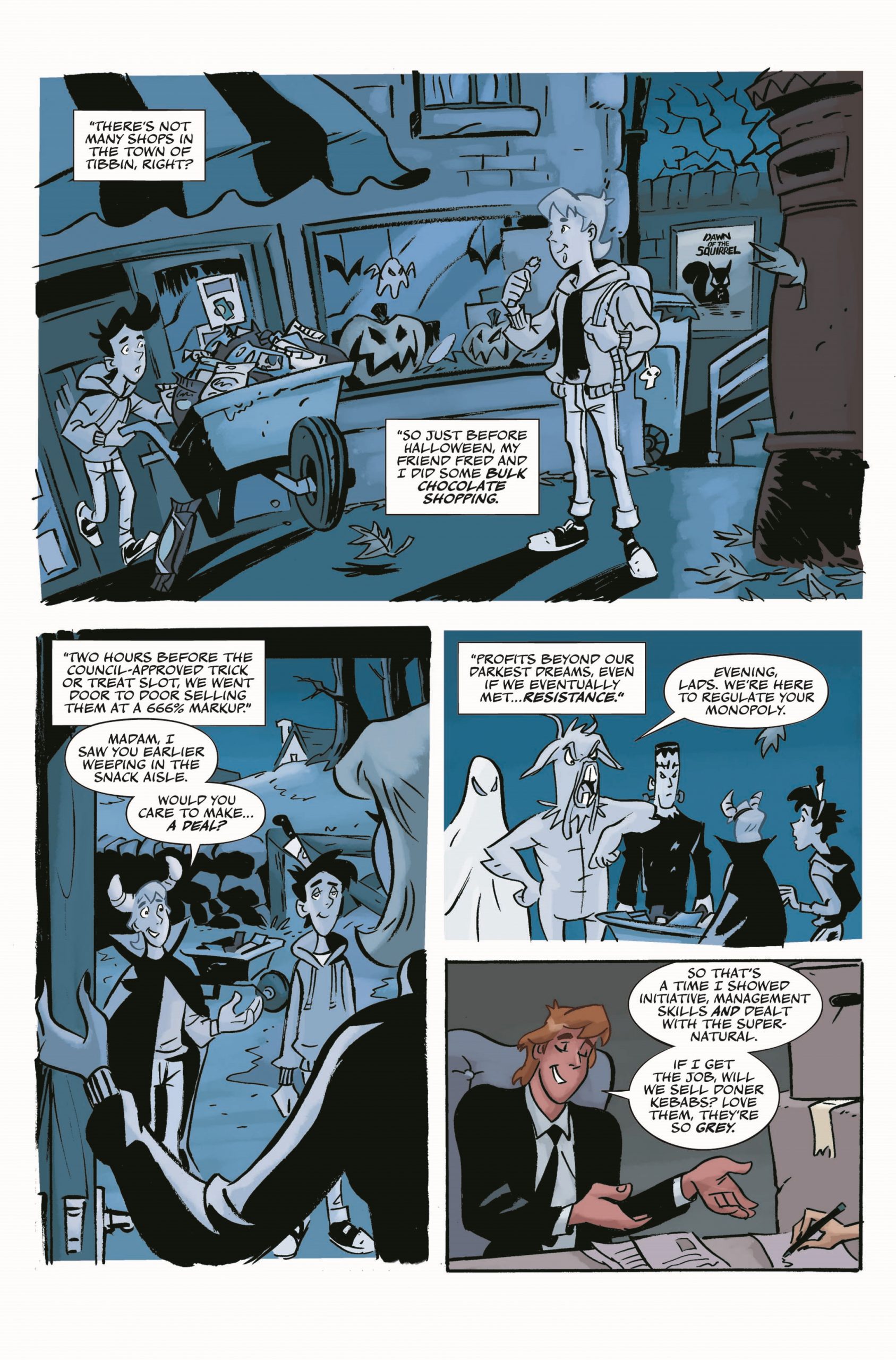 Me: How would you describe the personalities and relationship between Ralph Foster and Dr. Victoria Hedgewood?

NB: I honestly think Ralph doesn’t think that hard about things and is happy to just accept that Victoria does this stuff entirely out of a combination of benevolence and the desire to earn a living. He’s a self-absorbed guy, a problem that’s only gotten worse since his resurrection, and Victoria has gotten used to him being a useful, obedient presence. By the end of Chapter One, they’re going to disappoint each other.

Me: What can you tell us about Ralph’s hometown of Tibbin and how the setting plays a role in the story?

NB: Tibbin in this story is somewhat of a microcosm of the wider world—it’s a small town, people are often in each other’s business, there’s a real common sense of ownership, but do they care enough about the community to make any kind of sacrifice? How will they react when they discover that interfering with deathly forces isn’t quite the same as ordering a takeaway?

A lot of these questions were in my head in 2020 when I wrote the first draft—it’s a bit of a pandemic project, albeit not in a direct literal way. No viruses here. 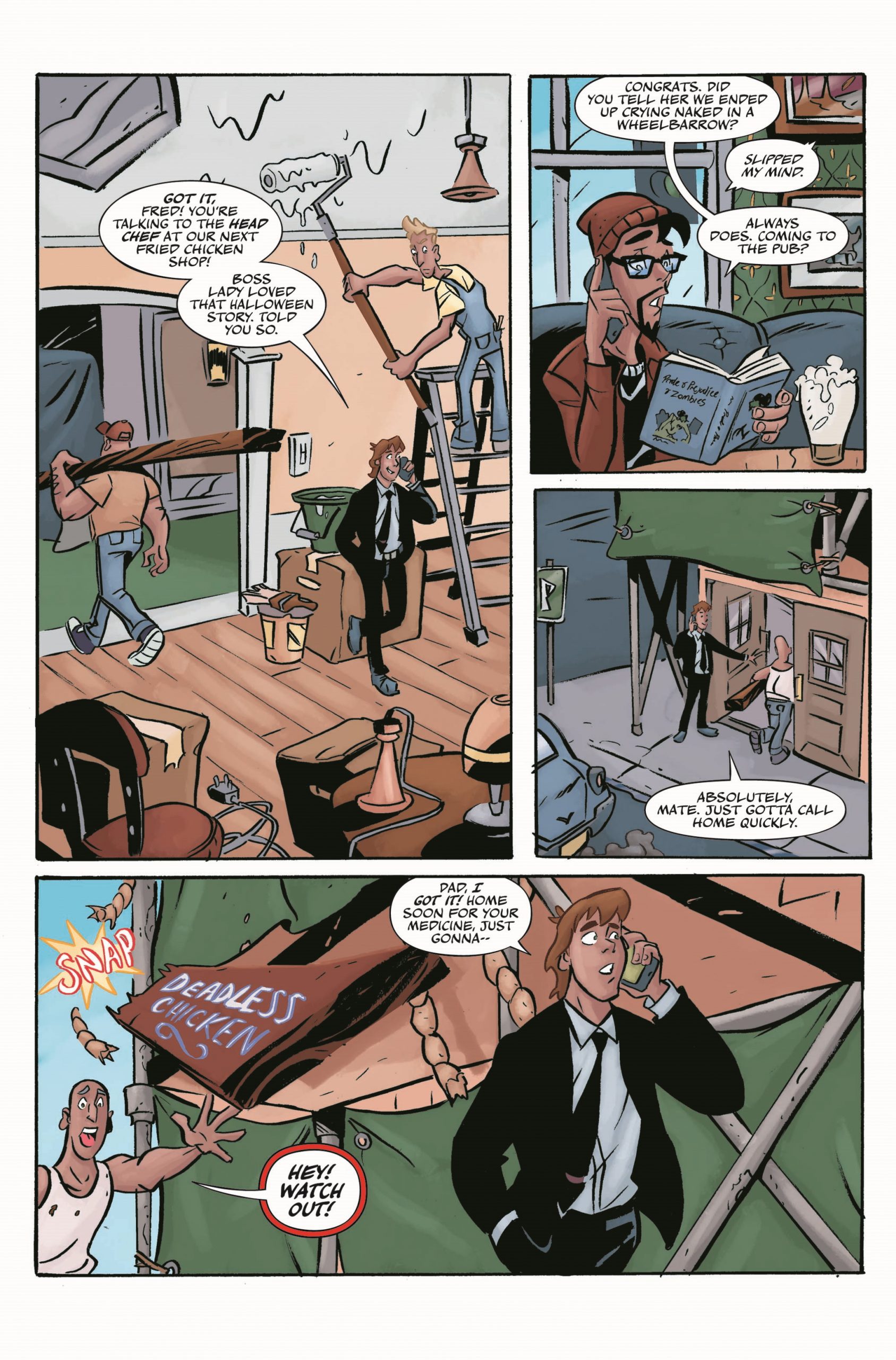 Me: This is your biggest project to date, literally, as Death of a Necromancer is a 114-page graphic novel composed of four chapters that will be released to backers upon completion. What advantages did you see to releasing it in this form rather than doing individual issues/chapter Kickstarters?

NB: I wanted to produce something longer, something with a spine, a more substantial work than the shorter one-shots, and Robert is fast enough for this to be viable. Helps that we’ve built in a decent chunk of lead time—he’s now inking Chapter Three.

Plus there are practical and economic up-sides—it saves a lot of calculations about keeping individual issues in print and worrying about them being made redundant by a later collection. This way, there’s one permanent edition and no one needs to worry about whether the next issue will appear. 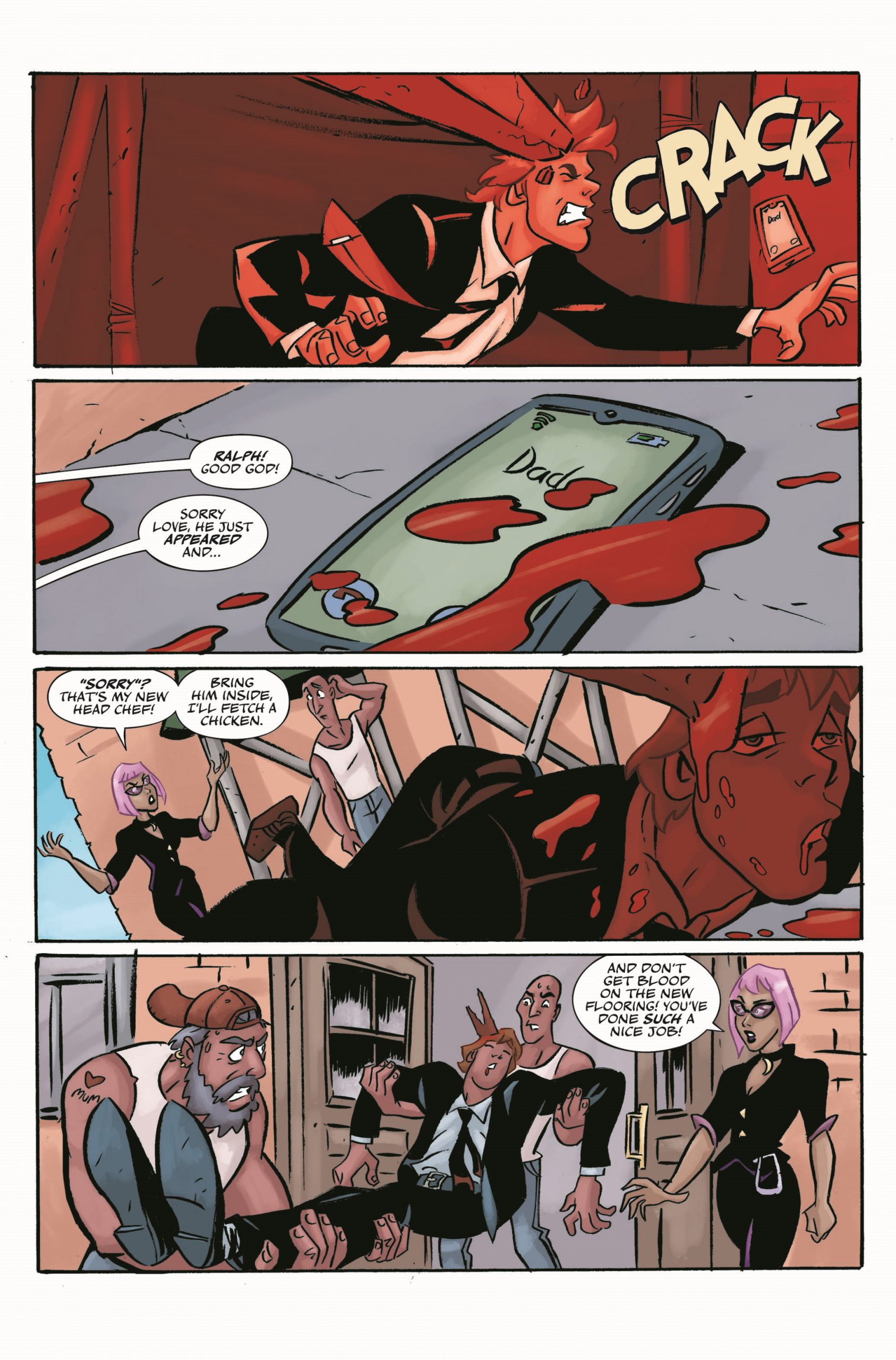 Me: Your creative team includes artist Robert Ahmad, colourist David Cooper, and letterer DC Hopkins. What does each of them bring to this title that made you want them to be part of the Death of a Necromancer team?

NB: Robert was somewhat responsible for the whole story—we chatted about our next project after And It Snowed, and he mentioned wanting to work in a gothic-romance vibe, something more Tim Burton-esque.

So I built out from there, always with him in mind—he’s an amazing storyteller, especially at subtle shades of character emotion, so I wanted to try and write something with nuance and complexity. As well as the inevitable silliness.

Similarly, I always wanted to bring back both David and DC for this project, as we’ve enjoyed working with them before. David brings a slick consistency to the colours whilst making sure to fit the changing tone of the story, which is useful when you’re pivoting between comedy and horror.

And DC’s lettered most of me and Robert’s work together, and has a great instinct for making everything look right on a page, as well as producing memorable styles to communicate common everyday situations, such as “your soul delivering a scolding internal monologue”. Never fails to go above and beyond. 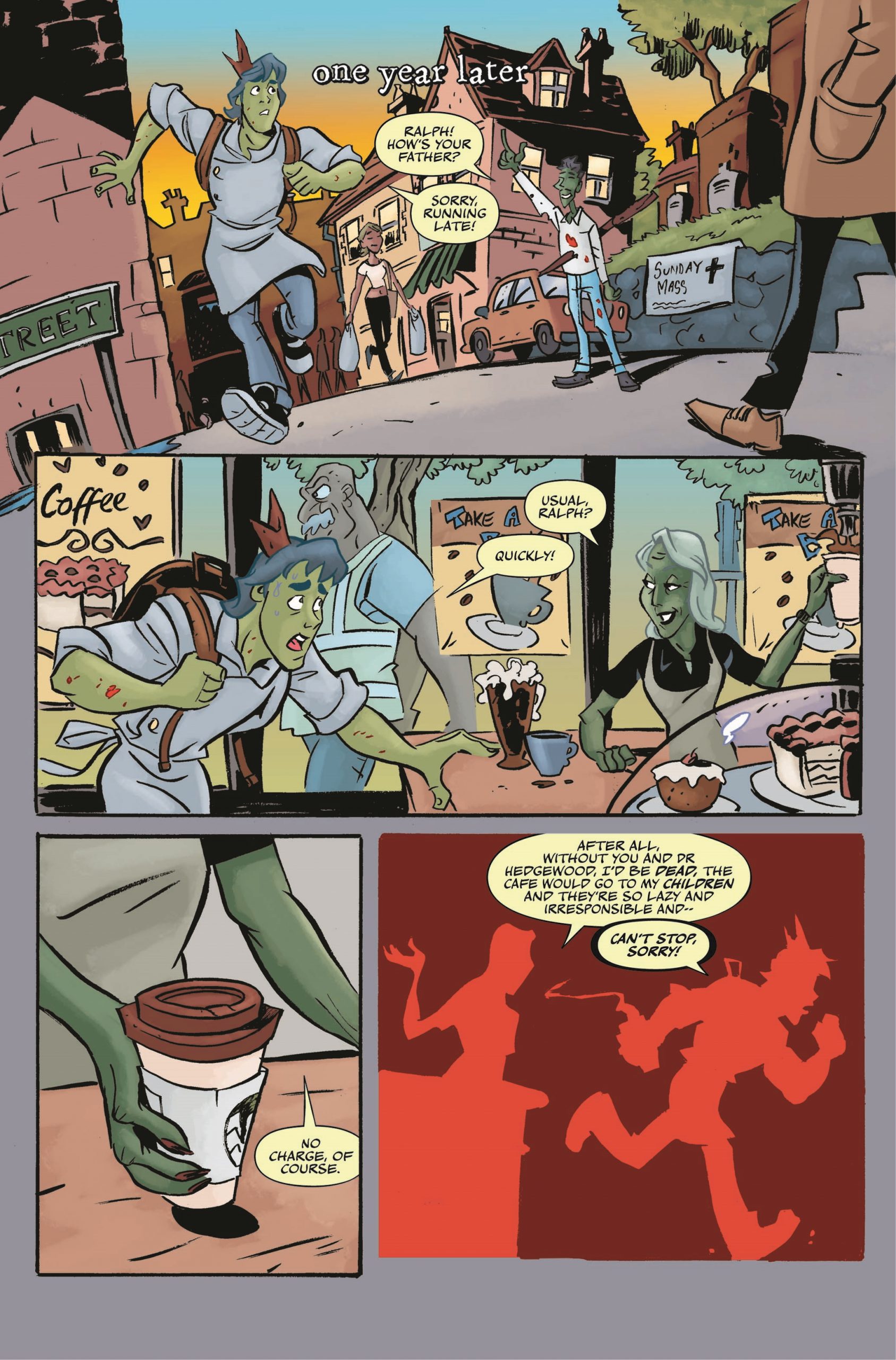 Me: Can you mention some of the highlights of working with this team on some of your previous projects?

NB: David coloured The Catalyst, and much like I mentioned above about changing tones, that story swings between whole genres, and David did a great job of always capturing the feel of a specific section, whilst keeping the whole book of a piece.

While DC is always a pro at the interior lettering, I’ve also really enjoyed his logo work across the last two projects. His And It Snowed logo was an exact evocation of the swirly Buffy-esque urban fantasy genre we wanted, and for Necromancer, Robert drew a letter N containing a chicken (obviously) and DC worked around it to create something perfect for the pop-goth tone we wanted. 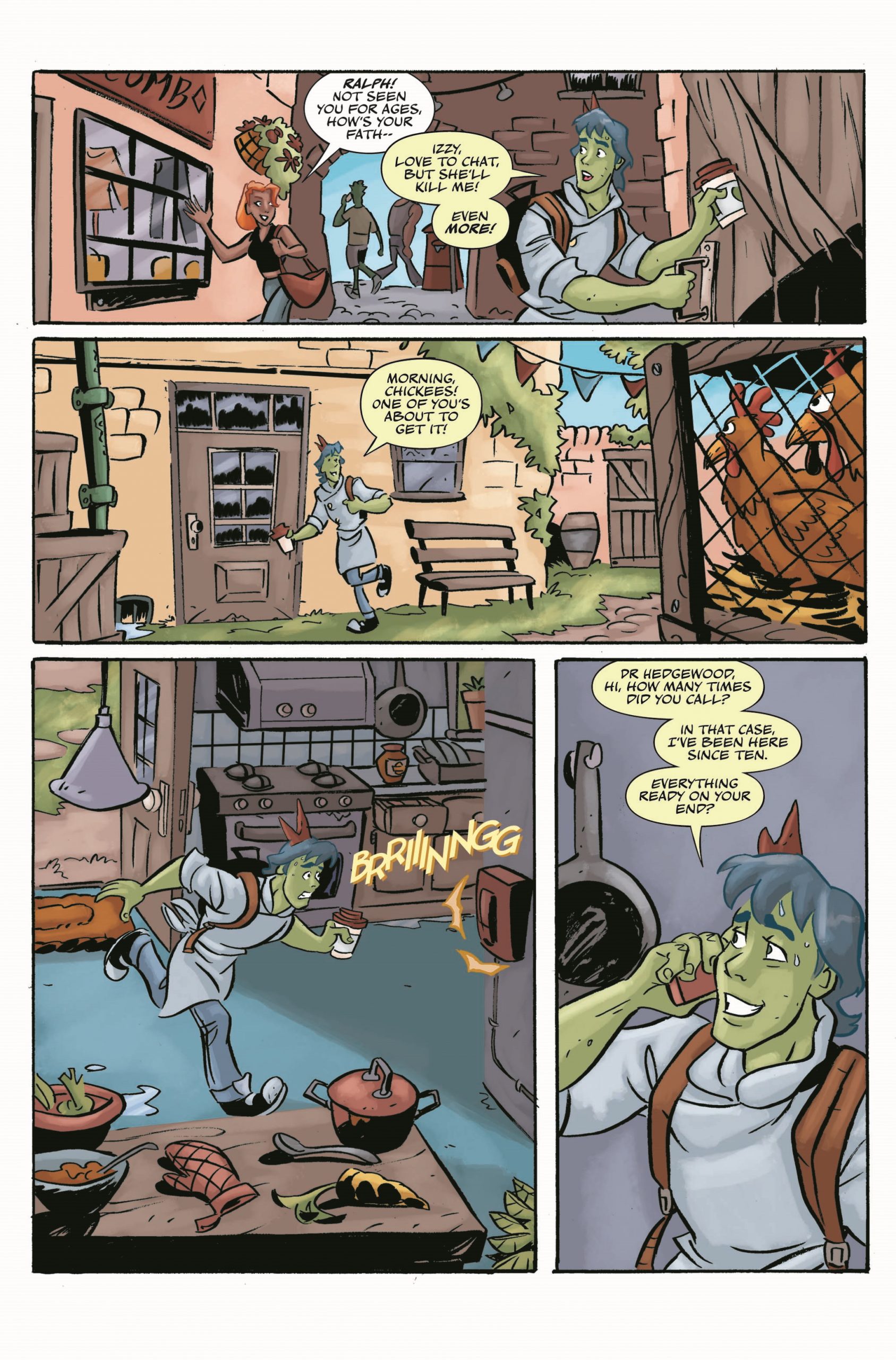 Me: What is the number one reason why people should pledge money to your Kickstarter campaign?

NB: Because I honestly believe there’s nothing else quite like it out there, and you get the full complete story.

Me: How did the pandemic impact your writing as well as Kickstarter plans?

NB: As I say, I think I’ve definitely had thoughts about communities and what it means to us, which went directly into the story, as well as giving me a wedge of free time to plough into completing the entire script.

Not to mention the economic practicalities—the reason I can afford to do the whole book like this is the money I saved from not leaving the house for the best part of a year. 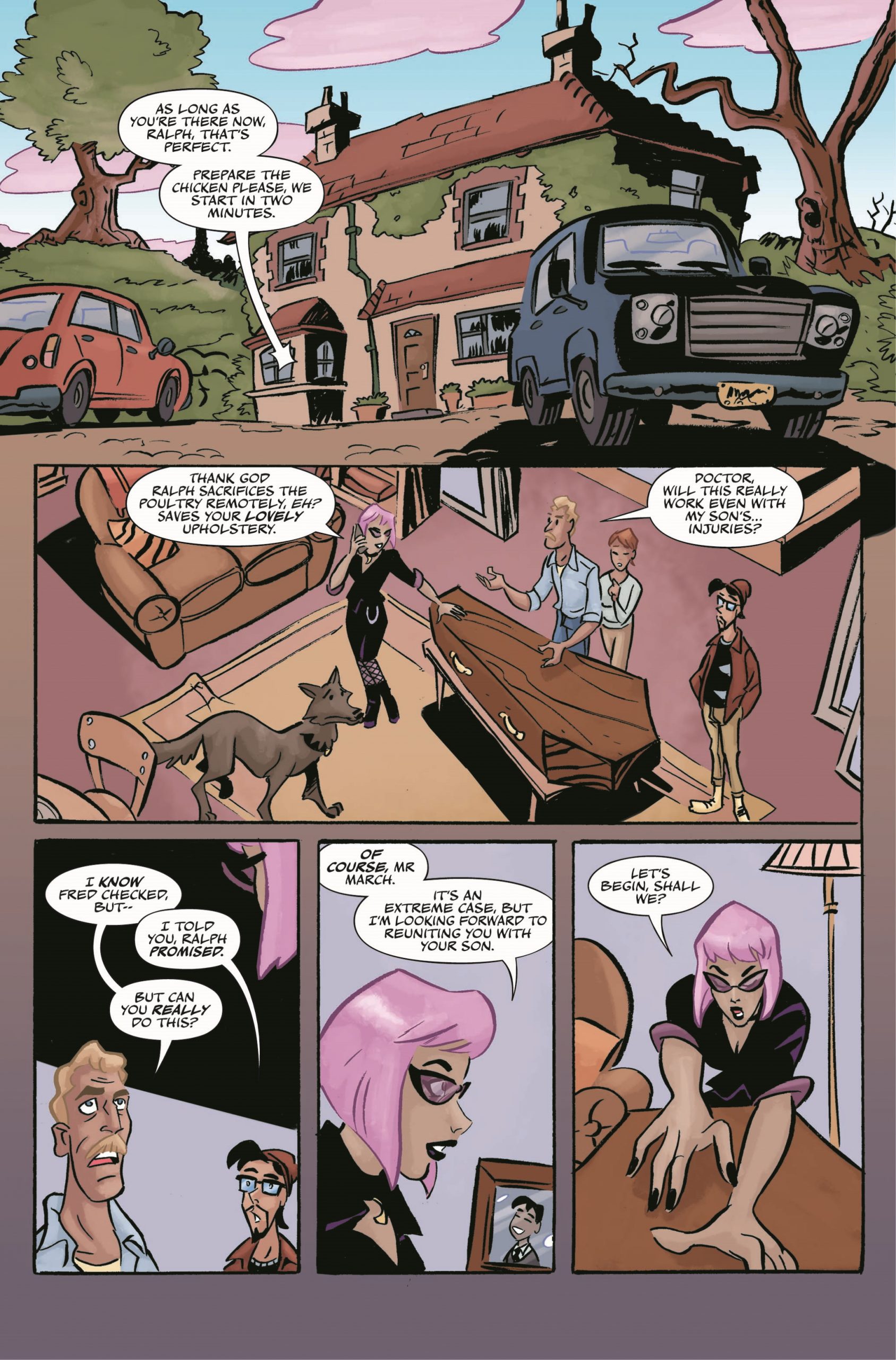 NB: No matter how odd your story seems, persist if you still believe in it. There’s some genuinely bizarre material out there, stranger even than our comic about fried chicken necromancers—someone will love your idea.

Me: Promote yourself! What other projects in addition to this one do you have planned for us to look forward to in the near future?

NB: Work continues on the next issue of FairyFare, in which one of the two fairy sisters starts to come undone. Rosie Alexander has completed layouts and is now plunging into the lineart. I’m hoping to see that also crowdfunding this year. 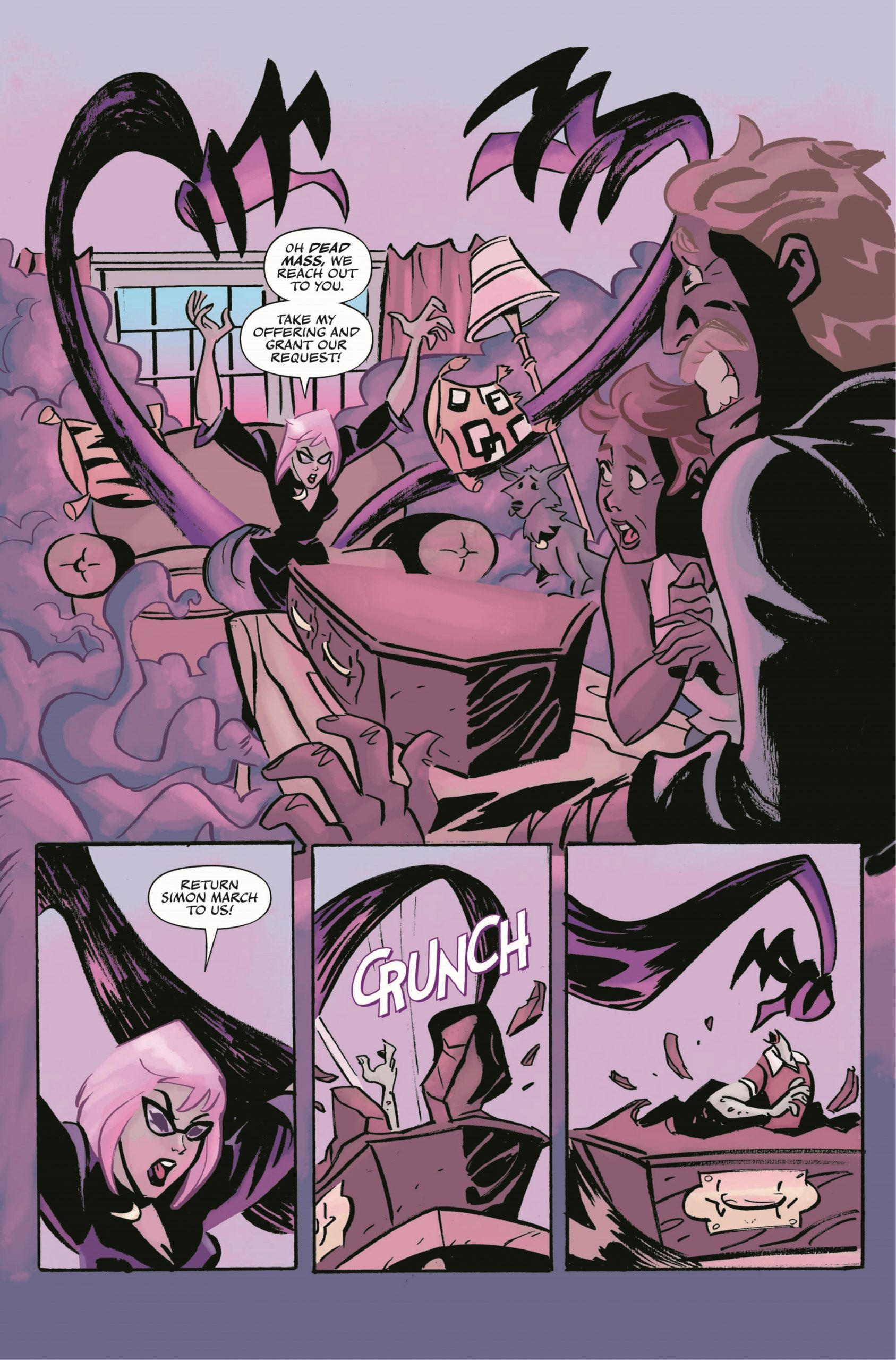 Me: Thank you for joining us once again to talk about your latest creative endeavors! Best of luck with Death of the Necromancer, which readers can check out on Kickstarter here.

Bear Skin – a Hardcover graphic novel of Dread and Horror

And some new “Zoop into the Week” features: