Horror can be for kids, as evidenced by James Powell’s House of Fear series! Specifically, these standalone stories have elements of horror while also being fantasy-adventure stories. Great for fans of Scooby-Doo, Goosebumps, and Monster House who aren’t looking for violent stories (or who just need a break from them).

The House of Fear Vol. 1 & 2 campaign is the first time the second trade paperback collection of the series, House of Fear: Hair Today, Gone Tomorrow and Other Scary Stories, will be available. It will also feature two never-before-read stories, “All That Glitters” and “Hair Today, Gone Tomorrow,” along with collecting six other House of Fear stories, for a total of 176 pages of fun. The six stories that longtime readers of the series may be familiar with are “Bria the Barbarian,” “Hollow,” “The Infestation of Mr. Skinny Legs,” “Rubber & Glue” (which I edited myself), “That’s a Wrap,” and “The Trees Have Eyes.” These aren’t the same stories either as several now have updated art, colors, and dialogue. 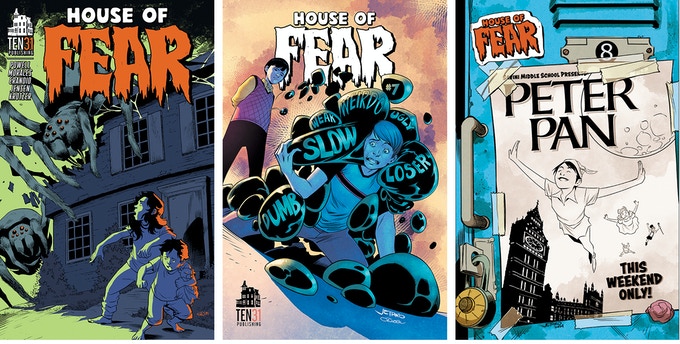 Creator and writer James Powell, who is also a full-time editor, has had work published by Dark Horse, Image Comics, and Random House, to name but a few publishers. The artwork for his House of Fear stories is by Jethro Morales. His artwork has been featured in Marvel Comics’ Marvel’s Voices: Pride #1 as well as a host of Dynamite Entertainment titles like Vampirella and Green Hornet. The rest of the team includes James Hislope, who provides the art for the host of the series, colorist Josh Jensen (Adamant) and letterer/designer Matt Krotzer (Strayed).

The goal of the Kickstarter is to raise $11,000 by May 24, 2022, at 12:31 PM EDT. Rewards include digital ($12) and physical ($30) copies of the second volume while newcomers to the series can get both volumes digitally ($20) and physically ($45). There will also be a limited-edition House of Fear #9: All That Glitters available in print ($42). For more extensive reward options, check out the Kickstarter page.

But let’s learn more about these scary stories for young adults from the mastermind himself, James Powell.

Nicole D’Andria (ND): How did you go about deciding what other stories should be collected in these volumes?

James Powell (JP): We had originally planned for the second volume to be another book that Dark Horse published. We had six stories originally expected for volume 2, but there were a few delays with the publisher. Meanwhile, we kept forging ahead, developing more stories for the series. Eventually, we felt it best to self-publish the collected edition to get our stories out into readers’ hands sooner. No one likes delays, but in this instance, they gave us time to add two stories to the book, which I’m excited about. It’s now eight stories and 176 pages, and I think our readers will appreciate the extra content.

ND: You mentioned that one of the new stories in this volume, “All That Glitters,” was inspired by Jude Creek’s art, the son of one of your Kickstarter backers. Can you tell us a bit more about this?

JP: In one of our earlier Kickstarter campaigns, we offered a tier that let a backer design the monster for one of our stories. Someone took us up on it, and I met with him and his son, Jude. Turns out, Jude is one heck of an artist, and he showed me several of his pieces. While we were talking about art and comics and what monster he might like to draw, I mentioned that I sometimes write stories about the things I’m scared of (spiders and moths, for example, both of which made their way into issues of House of Fear).

He mentioned that he’s a little nervous in open water, so I suggested he pull from that and consider drawing an underwater monster. He then spent some time drawing all sorts of monsters, including giant flies, a menacing flying squid creature, and a scary-looking person in an underwater heavy diving suit with a copper hat.

But I gravitated to the creepy-looking tentacled creature. Jude mentioned that it uses a jewel to lure people toward its trap. After hearing that, I immediately knew the story I wanted to tell.

The story itself features two girlfriends, but I came up with a way for a fun little Easter egg by getting Jude and his father into the story, too.

ND: When creating horror for kids, what do you think are the biggest aspects to avoid when writing stories?

JP: I have a set of rules I adhere to, such as no weapons like knives or guns, and no blood or gore. I want my stories to be scary, but not real-world scary. Instead, these are closer to fantasy-adventure stories in the trappings of classic horror. Don’t get me wrong, I put kids into plenty of danger in our series, and things don’t always work out for them in the end. But they’re facing off against monsters, like giant spiders, sinister jack o’ lanterns, and dragons. I try to instill a certain level of tension into the stories to make them engaging for kids and adults; I want them to be scary in an otherworldly sort of way.

ND: Out of all the stories you’ve written for House of Fear, which story is your favorite and why?

JP: I wish I could answer that. Seriously. I know it’s cliché to suggest that I like them all, but I do find something to enjoy about them all. I love the action from “Bria the Barbarian,” the originality of “Rubber & Glue,” and the ending of “Hollow.” From the first series, I think “Attack of the Killer Snowmen” was my favorite because that’s the story that set the tone for the rest of the series. It’s fun, has plenty of action, and hits all the right spots for an action story set in the world of monsters. 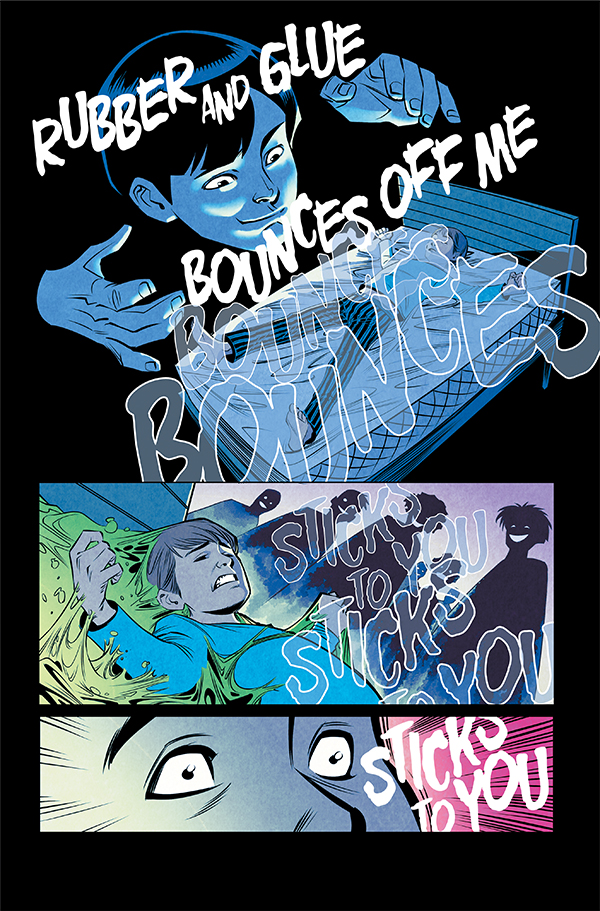 ND: If you had to face your fears and live through one of these stories, which one would it be and why?

JP: I lived through aspects of “Waiting in the Wings” already. When I was a kid, we had a nasty moth infestation. I mean, they were everywhere! I already sort of hated those flying monsters, but it got worse one day when I opened the garage door and thousands flew out of the garage. Hundreds of them flew right into me. I had them crawling under my shirt and hitting my face. It was horrible. But the worst part was when one of them flew right up my nose!

I took that real-life story and thought about what could happen that would be even worse than that? In “Waiting in the Wings,” it most definitely gets worse for young Alejandro. 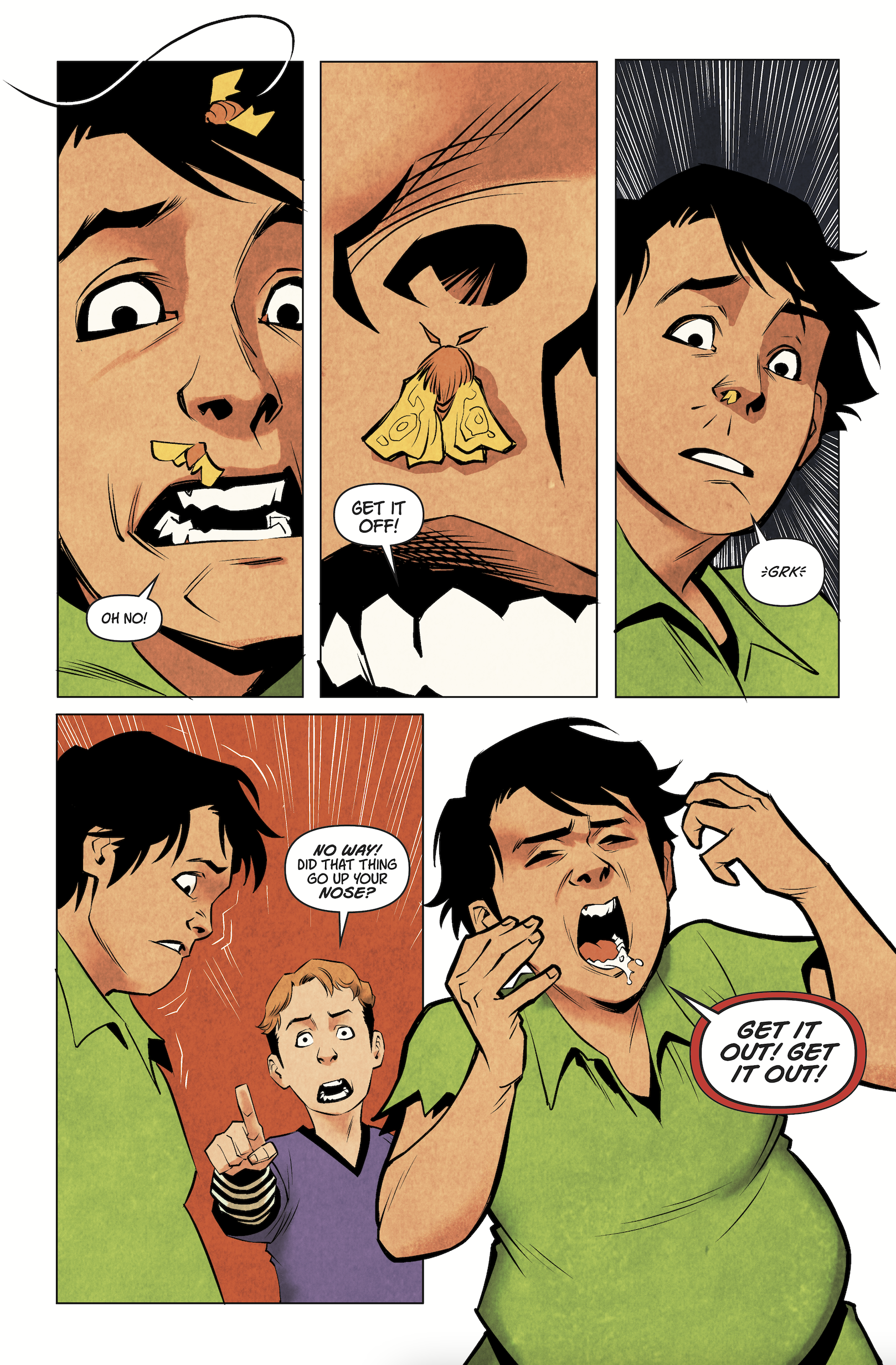 ND: Which story would you say was the hardest to write and why?

JP: In this latest batch of stories, I’d say they all came fairly easily. Sure, there were rewrites and plenty of polishing, but overall, once I had the characters in mind and the basic premise, they all came together pretty smoothly.

In the previous volume, however, I know “Teeth” was a real bear. I rewrote certain scenes in that story over and over and over. In that one, two siblings must fight off an evil Tooth Fairy, and they hatch a plan to use toothpaste, floss, and other tools of oral hygiene to thwart her. For some reason, the story was too dark in some drafts, or too silly in others. It took me a long time to get it just right. By the end, though, I think we nailed it. It walks a fine line and is likely our scariest story. But also the most rewarding.

ND: What’s the number one reason why backers should pledge money to your project?

JP: House of Fear Volume 2 is 176 pages of monster-fighting fun. And if you also read the first volume, there’s 320 pages of action. I know some potential backers hesitate when they learn that the series was originally designed for middle grade readers, but I don’t water down anything. If Pixar developed a scary movie, I think it’d feel and look a lot like what we’ve done in House of Fear. These are great stories with a few scares, some humor, and a heartwarming moment or two, but there’s plenty of fun for anyone who likes series like Scooby-Doo or who has fond memories of Goosebumps or Tales from the Crypt.

And if that’s not enough, then remember that each story has monsters drawn by the incredibly talented Jethro Morales, who’s now working with Marvel. There’s at least one panel in each story that’s well worth the price of admission all by themselves. 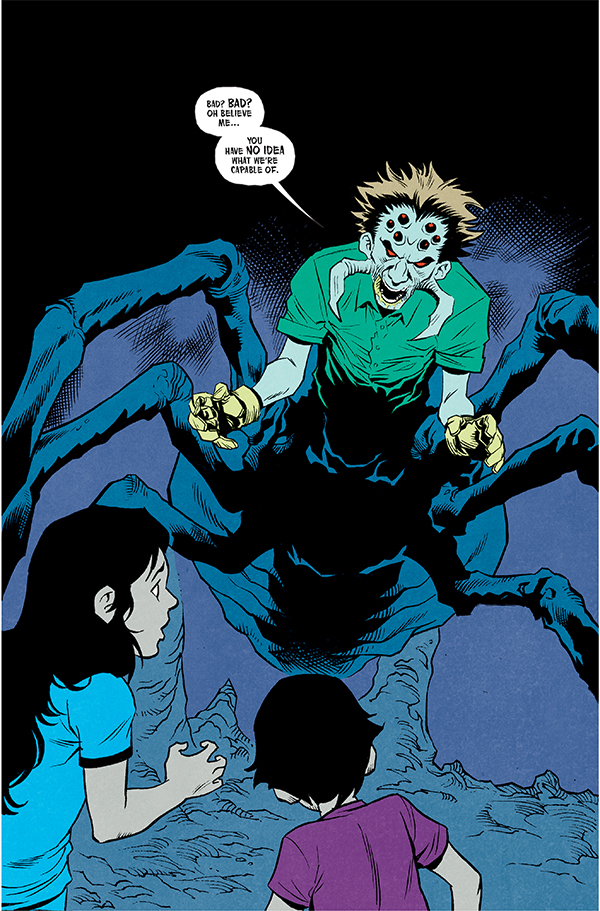 ND: What inspirational words do you have for aspiring comic book writers?

JP: Keep creating. You have art inside of you that wants to come out, so do everything you can to find time to let that art out. Others will suggest it’s safer to not follow your dreams. Or your mind will tell you that you’re not good enough. Ignore those voices and plow forward. Keep making art and you’ll continue to grow and improve. There’s a lot of joy to be had when creating and sharing your art with others. Savor that and keep creating.

ND: Promote yourself! What other projects do you have coming out in the near future?

JP: I have several projects in the works. I’m a professional editor by trade, and I’m working on a couple of anthologies that I hope to have announced if not released by the end of the year. I also have several scripts developed that just need artists attached to move forward. One of them is a continuation of Bria the Barbarian, a character who makes an appearance in House of Fear Volume 2. 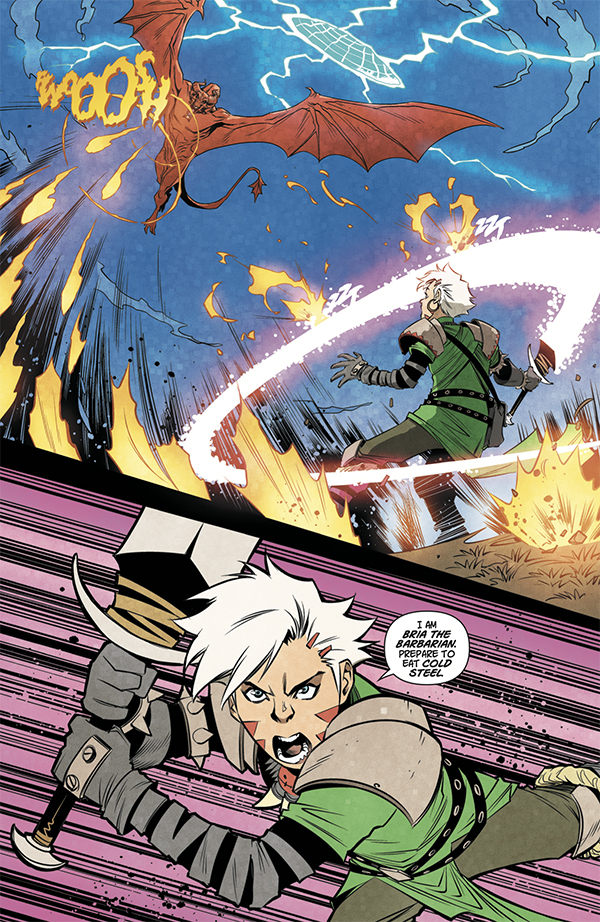 ND: Thank you for taking the time to let us into your world, James! Readers interested in experiencing stories that feature everything from giant spiders to sinister pumpkins can check out the official Kickstarter here.

Death of a Necromancer