The all-star team of Karl Kesel and David Hahn return with their own superhero universe starring Impossible Jones! This time, she’s teaming up with Polecat in their latest oversized team-up special on Kickstarter. Learn everything you need to know about the sassy superhero (aka thief) from Karl Kesel himself!

In the world of superheroes, Impossible Jones is a thief pretending to be a hero. In this particular story, she’s joined by legitimate superhero Polecat, who is hunting for a ghost. The graphic novella is over 54 pages, which includes the main story in 48 pages as well as a backup story featuring the ever-elusive Even Steven and other stretch goals.

The amazingly talented creative team is helmed by Impossible Jones co-creator, writer, and inker Karl Kesel. The writer for the first Harley Quinn series, Kesel also created King Shark while working on Superboy and has also been a part of DC Comics series like Superman and Suicide Squad. The co-creator and penciler for Impossible Jones is the Eisner and Ignatz award-nominated David Hahn. Hahn has worked on Batman ’66, Spider-Man Loves Mary Janes, Lucifer, and many other critically acclaimed titles. 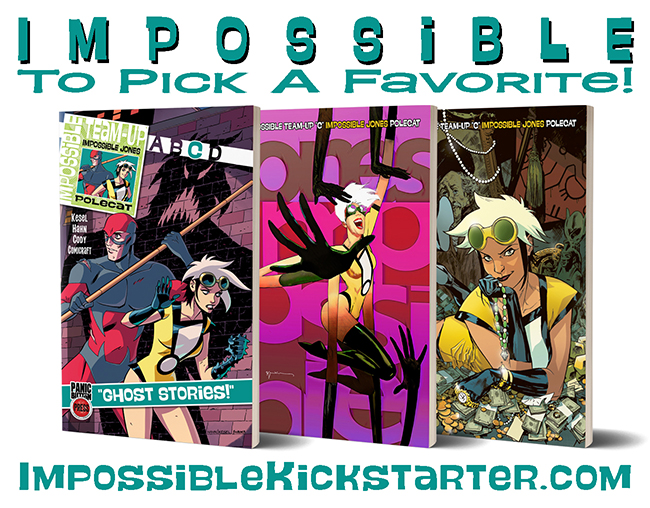 The lettering is done by Comicraft, who have been lettering comics since 1992—any titles you can think of, from Wolverine to Teen Titans, Comicraft has probably lettered it! The team is rounded out by their new colorist, Ryan Cody, who worked on amazing titles like Justice League vs. The Legion of Superheroes. And full disclosure, I work as a very happy editor on the Impossible Jones title!

The project has blown passed its $18,000 goal and hundreds of supportive backers have unlocked stretch goals as well. The Kickstarter will remain live until June 2, 2022, at 7 PM PST. Rewards include digital ($8) and physical ($20) copies of the Impossible Jones & Polecat Team-Up issue with gorgeous variant options available from Stuart Immonen (X-Men, Spider-Man) and Bill Sienkiewicz (Moon Knight, New Mutants) for $28. To check out the rest of these impossible rewards, check out the official Kickstarter page.

Let’s explore the world of Impossible Jones with the co-creator himself, Karl Kesel!

Nicole D’Andria (ND): This is the third team-up Impossible Jones has been a part of. Can you tell us how her dynamic with Pole Cat will differ from her previous team-ups?

Well, IMP’s first team-up was with HOLLY DAZE, and she and Holly are truly, honestly friends. They like each other and—more importantly—trust each other.

IMP’s second Team-Up was with CAPTAIN LIGHTNING, who’s very much an authority figure, the “lead” superhero in New Hope City. Lightning isn’t sure he should trust IMP, and IMP knows that—and knows he’s right! There’s always the sense that Lightning is trying to trip IMP up, make her show her true hand—or at least IMP thinks that. So their relationship is usually a bit tense.

POLECAT is just an innately likable guy! Everyone likes Polecat! Including IMP! Because of that, Polecat has the tendency to bring out the best in IMP, to nudge her to do the right thing. Is he doing this because he suspects the truth about IMP (that she’s a thief pretending to be a superhero), or is he doing it just because that’s who he is? Impossible (so to speak) to know. I do think—intentionally or not—Polecat acts as IMP’s Jiminy Cricket. 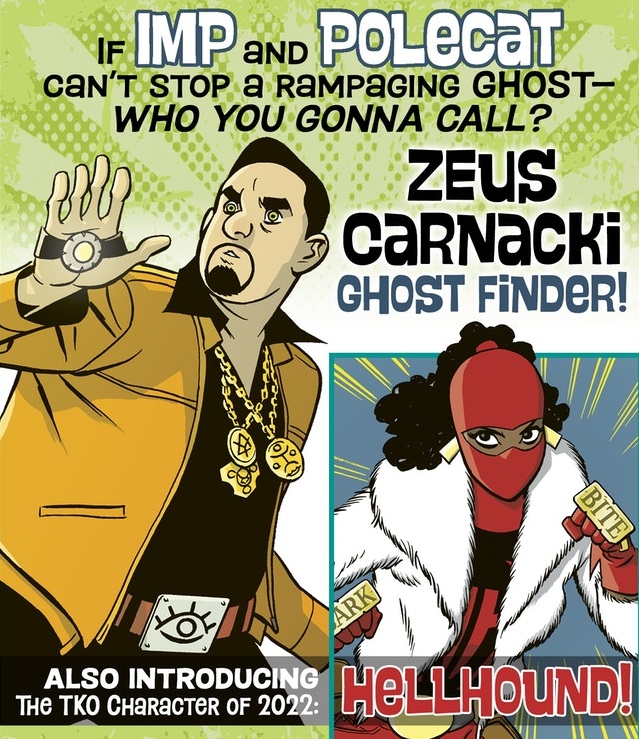 ND: This issue also sees the introduction of Zeus Carnacki and Hellhound. What can you tell us about these two characters and the role they’ll play?

KK: ZEUS CARNACKI is a Ghost Finder. He uses high-tech gizmos (like his electro-ectogram) to deal with the supernatural. He’s descended from Thomas Carnacki—a supernatural sleuth created by writer William Hope Hodgson! (Google him!) As a public domain character, Thomas Carnacki also appeared in Alan Moore’s League of Extraordinary Gentlemen books. Zeus is an affable fellow, with more than a hint of a carnival showman in him.

HELLHOUND is a back alley brawler who, for a long time, fought alongside Polecat as they targeted the underworld operations of New Hope City’s crime lord, Mr. Gila Monster. Hellhound is Polecat’s lifelong unrequited love—and now we learn their whole story, beginning to end. I think it’s safe to say that the memory of Hellhound still haunts Polecat to this day. 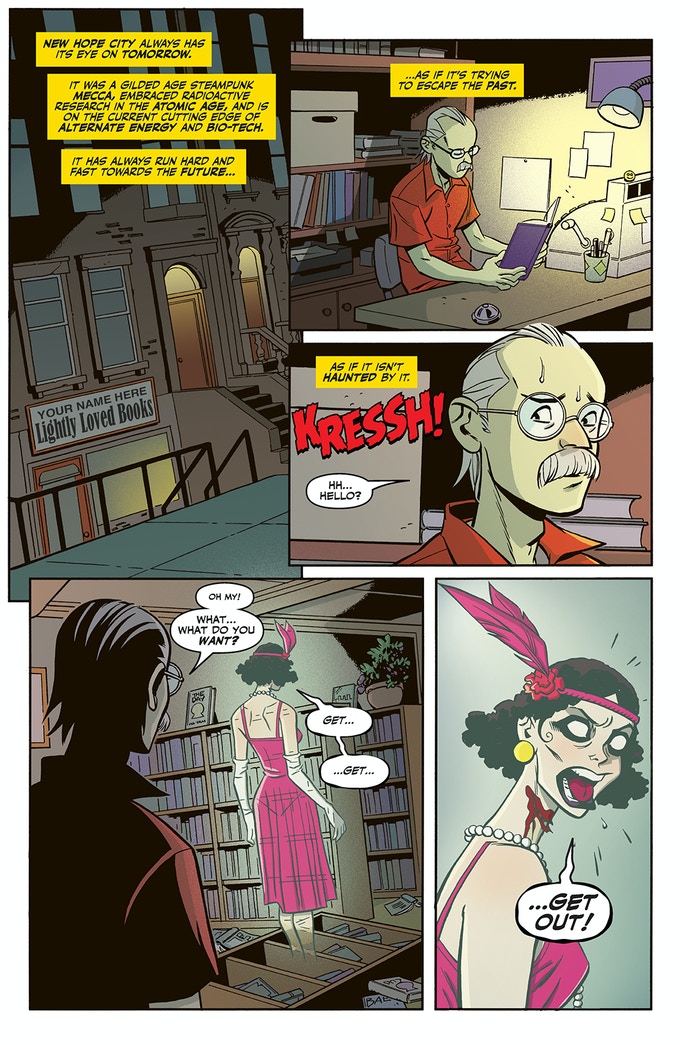 ND: What is it about David Hahn’s artwork that you feel perfectly embodies the world you were trying to create in Impossible Jones?

KK: David’s work is unapologetically modern and urban. Not that he can’t draw natural settings—he does them beautifully!—but the clean, clear simplicity of his work lends itself to city stories particularly well. Plus, his work can be bright and upbeat—but also dark and dangerous. Not everyone can pull that off. That sort of duality is at the very core of IMPOSSIBLE JONES.

ND: If you could have the superpowers of any specific character within Impossible Jones’s universe, which ones would you have and why?

KK: Well, I created CAPTAIN LIGHTNING in 2nd Grade—and drew many stories about him when I was a kid—so of any of the established characters in the IMP-verse, I’d probably choose him. (Although I identify much more closely with Polecat.) But if I had to choose a character just for the sheer joy of being that character, it would have to be MONKEY WRENCH—who’s only appeared in 1 Panel in the IMP/Lightning book. Monkey Wrench is an interdimensional trouble maker—sort of like Mr. Mxyzptlk, except as a monkey, but with Thor’s Uru hammer, if that hammer was a huge wrench. 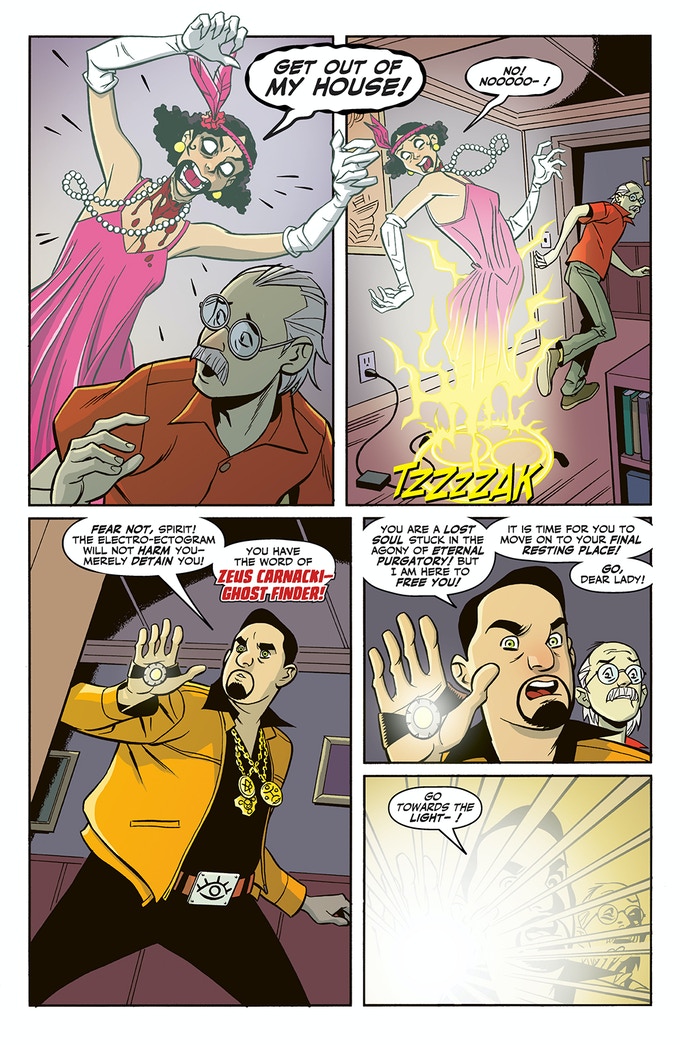 ND: What’s the number one reason why people should pledge money to your Kickstarter?

KK: The same reason they should support ANY indie comic: these are books from the creator’s hearts. It is great fun to play in the Superman or Harley Quinn sandbox, but I gotta tell you: nothing comes close to the sense of accomplishment and fulfillment you get when you work on a character and concept that is yours, that came from you. I’d like to think you can feel that on every single page of IMPOSSIBLE JONES.

ND: You have plenty of amazing comic book expertise thanks to having written the first Harley Quinn series as well as working on Superboy (creating King Shark!), Superman, and many other major titles. What would you say are the biggest lessons you’ve learned from the comic industry?

KK: Probably the most important thing I learned was that there’s a point you have to let a project go, send it out into the world, and move on. That’s more-or-less a hard and fast rule in the world of monthly comics, but it’s also incredibly important in indie comics, where you can be extremely self-indulgent if you’re not careful. Make it the best you can, in a reasonable amount of time. That’s the guideline I try to follow. A helpful corollary to that is: if at all possible, build a little breathing time into your schedule so you can step away from the project for a bit, then come back and look at it with fresh eyes. It’s amazing the clarity that can bring to, well, everything. 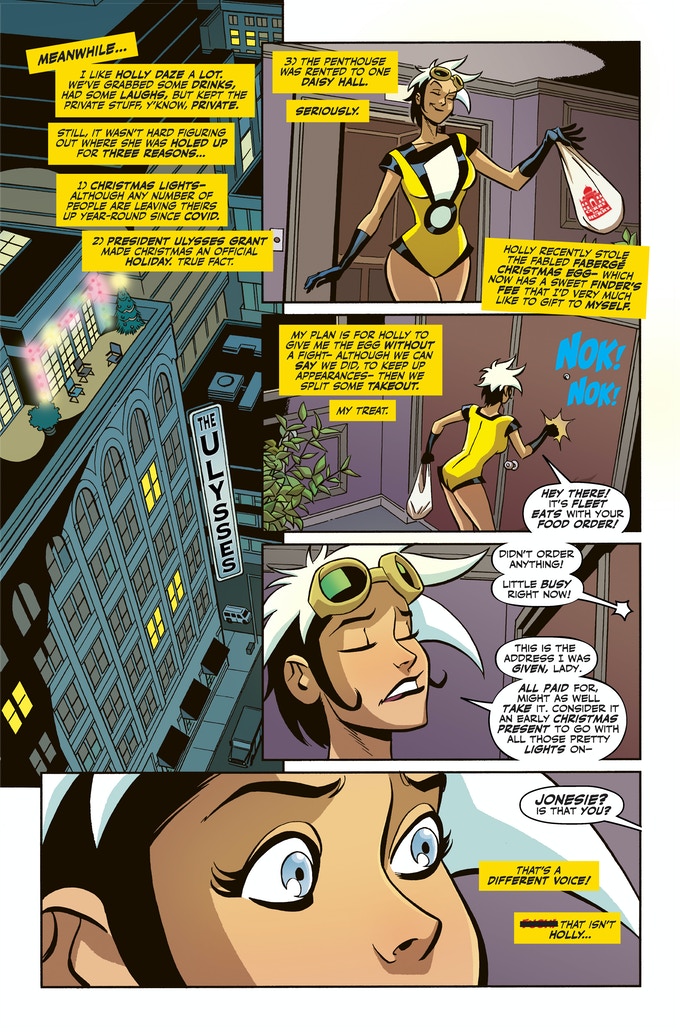 ND: What inspirational words do you have for aspiring comic book writers and artists?

KK: Being a professional writer or artist is a double-edged sword: you have to think you’re good enough that other people will pay money for what you do, yet you always have to be working to get better, there’s a little voice inside saying you’re not as good as you should be. You have to believe these two, seemingly contradictory things at the same time, all the time! If you can’t do that, this job isn’t for you.

ND: Promote yourself! What other projects are you working on that we will be seeing in the near future?

KK: More IMPOSSIBLE JONES! That’s really my game plan for the next few years, at least. But you never know what curve balls fate will throw your way. I could be hip-deep in a SAM HELL graphic novel this time next year, or any number of other projects and ideas I have in my back pocket. That’s what keeps life interesting! 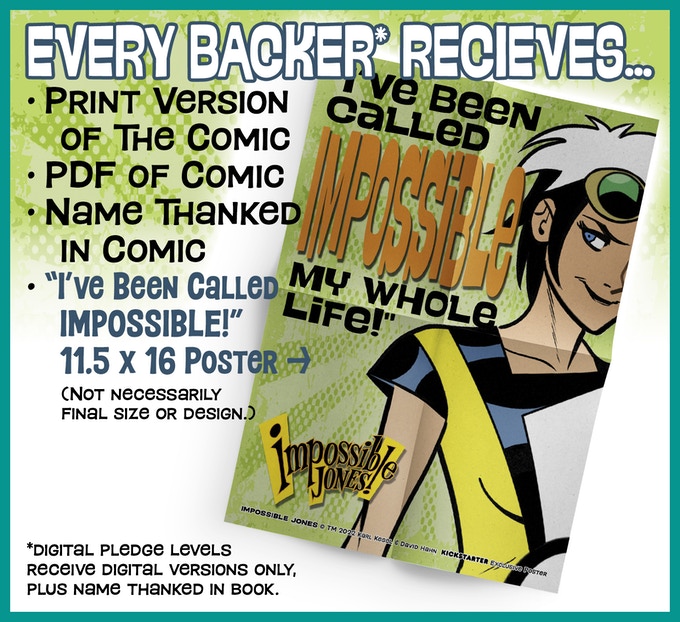 Me: Thank you for sharing your super-sassy superhero series with us, Karl! Readers can check out the action-packed Impossible Jones and Polecat Team-Up Kickstarter here.

Death of a Necromancer